Hi, remember me?  Yeah, it’s been awhile…  OK, so, it’s been a LONG while.  I took all of February off because I am a slacker.  And by slacker, I mean… I’ve actually been working.   Nothing fun mind you.  WORK work.  You know, that stuff you should be doing every day instead of reading this crap.

So, I think I’ve answered my WUMF question.  It’s dead.  It has ceased to be.  It became a hassle to try and cram small nuggets of content into a post at the end of the month just to hit a date.  I know.  First world blogger problems.

But, now we are into March and, of course, it’s time to remind myself of how much closer to death I really am. 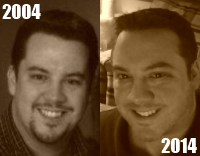 As a little experiment I went back and read my past posts on birthdays.  I was a morose sonofabitch, wasn’t I?  I just read the whole post about turning 33 and Madonna and American Pie and WOW!

OK…  Enough of that.

Here’s what the last six years have taught me.

What the hell?  If you are over 40, think about what 39 felt like.  I sure as hell do not have anything together in terms of my shit.  I know I have not grown up.   But I don’t feel like an immature asshole.  I am a perfectly aged one, if anything.    I don’t know if this is what could be considered a mid life crisis.  If it is, 79 is going to REALLY SUCK.

I guess that I’ve sort of reclaimed a bit of myself and don’t get as angry.  I couldn’t care less about the youth of America because, well, they’ll be in my shoes soon enough and then they will see what I’ve seen.  They will also have to deal with how my child acts because karma is a fickle bitch.  When the 20 year olds of today reach 39, my kid will already have been in their shoes and hopefully she will crush that bitch of a stigma.  If not, dumb youth is basically universal.

Another thing about 39 is that I feel like I’m healthier than I was through most of my 30s.   I wasn’t sickly, but my overall well being was poor.  My outlook was poor.  My intake was poor.   So, there is time to fix all of the internal struggles we have with getting older.  Unfortunately, we will still be hampered by some of the physical ones.    I wouldn’t tell you to be proactive and guard yourself against letting your body deteriorate, but I would say that treating your body like a rental car perched at the top of San Francisco’s Lombard St., revving the engine, knowing full well you took the insurance, is probably a bad idea.

Moderation is more than just a cliché, but it also matters what quality your vices are.  I drank a hell of a lot between 21-23 and I felt like crap, afterwards.  Now, I drink maybe once a week, and even though I have tied a few on in the last year, I have recovered quicker and with less effects during the drinking.   However, my body, in its reclaimed state can handle the alcohol a lot better.  My tolerance has gone up even though my weight has gone down.  I’ve also switched to a better grade of alcohol.  Consider how your body feels when it eats McDonald’s vs. a nice home cooked meal.  It’s still the same type of food, but better quality.  Staying away from crap like “Lite” beers and drinking more wine have had an overall positive effect.  Quality and quantity working together it seems.

SO, when it comes time to roll the odometer into my 40s, I’m probably going to get a rude awakening.  Who knows?  Maybe it’s like dusting off a classic car, one with low mileage, and taking it across country.  Shit starts falling apart rather quickly.   However, I have no desire to be afraid of life.  I am taking it as it comes.  Doing the best thing I can to stay here as long as possible, with flare and responsibility.    This body needs to be in motion and we should exercise it and keep it limber.  Get your ass off the couch and move, people.  If you do that, you can do all the other things you’ve missed out on in the last ten years.


Get Free Stuff or PayPal Cash!