I’m recapping our trip to the Great Wolf Lodge over Labor Day Weekend… nearly two months later. Next up, I’m talking about the room and the actual hotel rooms and water park. The room was, according to my wife, awesome. We had a King Room Whirlpool Suite with a sofa sleeper for my daughter. There was a gas fireplace, two televisions and a patio outside our room. Not too shabby. At Splash Lagoon we had to walk pretty far from a connecting motel to the actual park. Here, it was simply down the hall and down one floor. After driving for four hours, we wanted to decompress but the kid was jumping on the bed, “Let’s go! Get our swimsuits on, come on!”

Now, Splash Lagoon also had several slides of varying levels of thrill. There were ones for younger riders and then there was the pain hole that I tore myself up on over and over for two days. No such luck, here. It was very kid friendly. They had a small kids area with some little baby slides and standard buckets and fountains to get the little ones wet. In the middle of the complex there was the fort. It was a giant tree house looking structure with lots of rope climbing areas and various pipes and levers to squirt water out at people. Then, every few minutes, a bell rings and a giant bucket drops water on everyone.

Attached at the top were two slides, one that went in the dark and one that didn’t. In the back of the park, there were two kid slides, a couple more tighter turn slides that emptied into pools and two inner tube slides that went outside the building but were still enclosed. On the left side of the building was a pool with basketball hoops, a general swimming area and a small ropes course, and on the right side was the family and adult hot tubs.

Outside, you could go lounge at the pool which had lots of chairs and umbrellas and some basketball hoops in the water at one end. It was nice that they provided lockers at a fairly decent rate per day. The only issue was that the key was your standard locker key on an elastic wrist band. While trying to keep up with my kid, who insisted on climbing up to the top via cargo netting, I snagged the key on the netting and ripped it right off the band. I managed to find her and tell her to stay put while I climbed all the way back down to the floor and search for it. It doesn’t help that there is rushing water everywhere with a giant bucket dumping 1000 gallons on you every couple of minutes. Luckily, I found the key and my kid hung back until I was able to reach her.

After you’re done seeing the park you can get a pretty good, but slightly overpriced meal at the restaurant and even some ice cream. For breakfast they had a pretty decent buffet with omelet station. The thing is, after one day, you’ve pretty much exhausted all there is to do at the park. Splash Lagoon kept us busy for a couple of days but I was pretty much just standing soaked with nothing to do on day two.

After a long first day, we decided to settle down at the lobby and watch the Chuck E. Cheese style show with a bunch of woodsy creatures and a really bad Native American get up straight out of grade school Thanksgiving coloring books. 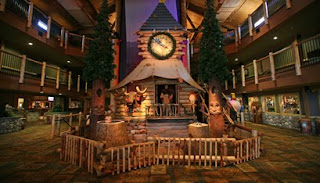 I wanted to download some pictures of the event, so I ran out to the car close to midnight to retrieve my laptop bag which had my microSD adapter in it.  Remember, I don't have a smart phone; just a lowly old LG Cosmos.  On my way out to the lot, I caught a glimpse of something interesting.   Lo and behold there’s one of the local police force parked outside. “Son of a bitch”, I thought. Of course, I had to get a picture of it because, well, if you read any of my Outer Banks posts from this summer you’ll understand why I am a little gun shy when it comes to vacations and the police. The next day, I had asked the server at the breakfast joint and they said the police are here often. In fact, they had an evacuation before we checked in the day before. Gives you a great sense of security, right? 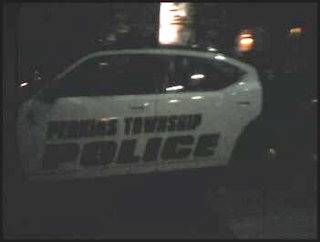 One of the last things we did at the hotel was go into the game room. That was a huge mistake. First of all, the child does not really play video games with any skill or coordination and the first thing she wanted to play was Dance, Dance Revolution.

“You have trouble walking in a straight line. No.”

Then she wanted to win something which is always a joke. After working at Cedar Point for a year we realized how bad the redemption games are. You spend obscene amounts of money for tickets to buy something worth a fraction of the price. Listen, the reason why people always win the Scale Games at amusement parks isn’t because the guesser sucks. The scales have nothing to do with your ability to fool someone. You are the fool because you play. If you see someone win, you are more inclined to play. So, you spend $2.00 on a game and win a prize worth about $0.20.

With redemption games, you pay $0.50 for a game of Skee-Ball, only to get enough tickets to get an eraser or $0.10 piece of candy. Now, the first two games of Skee-Ball ate my quarters, so I had to go get the attendant to refund me. That was a joke. One poor girl manning a counter with each side filled with people. There was no order, no line, no sense of organization. Quite frankly, I was happy to be out of there.