My wife hates my inability to throw away seemingly useless items. My garage is filled with these things. There’s a 4x8 piece of cardboard that covered our patio table while it was in the box. There are various curtain rods that serve no purpose. From the standpoint of an outside observer, these items are clutter, junk, refuse, or signs that I may be a hoarder. All of these are true but, though this be madness, yet there is method in’t.

Now, I am a product of my upbringing. My father is famous for repurposing useless items into ‘wonderful things’. He built an entire charcoal grill out of an old lawnmower, 55 gallon drum, swing set, and countertops. To that point, he also built a forge out of an old charcoal grill and a ShopVac.  I may have mentioned it before.

Additionally, I spent a great deal of my childhood playing old school text adventure games where you would acquire items, that held no obvious value, only to use them later on in a crucial part of a quest. A more up to date example would be the envelope of items that Ben Affleck receives in the movie Paycheck.

Still, regardless of the value of an item, I can eventually find a use for it. It may not be pretty or ideal, but it does the trick. I often find myself wishing I had something that I had already thrown away whenever I’m trying to patch something in the house. “If we only had a wheelbarrow, that would be something.”

And so the torch gets passed to another generation, as I found my three year old doing some decorating for Easter. She felt the need to hang her own decorations, such as hanging a triangle (musical instrument) on the handles of our hutch and a square of toilet paper (unused, thankfully) on a nail in our living room wall.

But what impressed me most was an empty Rogurt box hanging from another nail. It was slated to be put into the trash, once I actually replaced the full trash bag with an empty one, that is. But, sitting on the counter, she eyed it and saw a purpose for it. Unfortunately, it had no way of being hung on the nail, so she found a way to make it work. She took a Silly Bandz, wrapped it around the cardboard lid flap and then hung the entire box on the nail, using the Silly Bandz to hang it on the nail.

My wife was prepared to throw it away until she noticed how my daughter had managed to hang it. She neither intervened nor helped out daughter figure out how to solve the hanging problem.

Simply left to her own devices, a three year old solved a design problem. She’s either destined to pursue a career in engineering or be a useful hoarder like her father and grandfather. 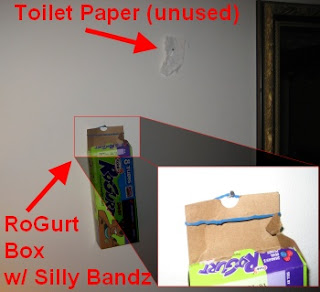