It’s an argument for the geek masses. Much like Kirk vs. Picard, Star Trek vs. Star Wars and Jar Jar vs. the Ewoks, some controversies will die hard. The lone gunman theory dominated my parents’ generation and here, in mine, there is the same debate.

This debate, of course, is whether Han Solo shot first in Star Wars: A New Hope.

Most people familiar with the original 1977 film, or at least those purists who denounce the constant re-releases of the films with new or changed scenes, usually agree that Han Solo did indeed shoot first and not after Greedo missed him at point blank range.

To think that Greedo had to fire first in order to preserve Han’s morality is ridiculous. Regardless of the outcome, Han was simply defending himself from a clear and present danger. Greedo intended to kill Han to collect the bounty on his life.

From the word go, people have fought this point and Lucas, feeling he needed to instill a sense of morals in his scruffy looking nerf herder, inserted a laser blast from Greedo as well as a CGI shift in Han’s position to make it look as it was truly a duel instead of homicide. Geeks raged on and the film was edited again to make it appear as if Greedo and Han shot almost simultaneously. Still the debate continued as t-shirts appeared, declaring, “Han Shot First”.

But this is entirely false.  Han did not shoot first.  Why? 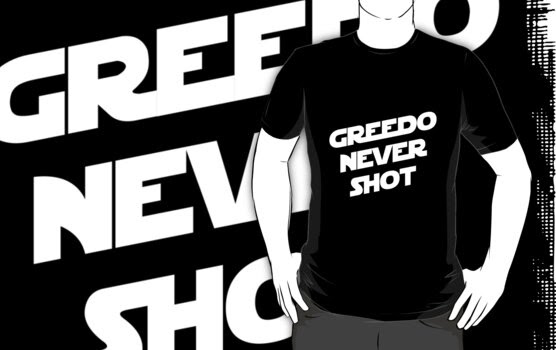 Need proof?  Here’s the original scene from the 1977 film.