Smash It Forward: A Public Shaming


Last week I had a moment of weakness.  I went against my Journey mantra and stopped believing.

I don’t know if it was because the universe is usually plotting against me and I let it get to me… or I just lost faith in humanity and jumped off the Earth bandwagon.  Not sure…

To sum up… I was helping my father-in-law by pumping his gas and when I went to pay, the fifty he gave me fell on the floor.  I didn’t see it, but someone did.  A lady picked it up and went about her business.  I almost accused the cashier of taking it.  I almost went ballistic, but I didn’t.  I swallowed my bile and just paid with my own card, accepting I was an idiot.

The problem was, I couldn’t completely trust that I knew what happened.  GetGo informed me that it appeared that the person next to me bent over and grabbed something off the floor, but there was no capture of what she grabbed.  It was all speculation.   They said they would follow up with loss prevention and let me know.  I expected that to be the end of the conversation.  I was out fifty dollars and my belief that there are good people in this world.  Believe me… I am not one of them.   I have so many faults and idiosyncrasies that volumes of psychiatric works could be penned just by peering into my brain.  It’s not a pretty place.

Today, GetGo called me to let me know that their Loss Prevention dept tracked down this person and that she admitted taking it.   It’s now sitting at the location on the manager’s desk.

Now, whether this person was truly shocked by the fact that she got caught… or she simply happened upon this fifty and was looking for a way to return it, I don’t know.  It’s quite possible she is completely innocent of any malicious intent.   The point is, even though there was a speculative theory about the events that day, she did the right thing.

I don’t know what Emily Post has to say about giving rewards or how much deserves a reward to be given.  Had it been $1000, I probably would have given this person something.  Then again, I don’t know what the intent was.  I know that there is a fifty dollar bill sitting at the office.

Since I can neither confirm nor deny the suspicions I had, I’ve decided to pay it forward.   I’m giving $25 to Hello Bully, a nonprofit group that helps to rehabilitate and repair the reputation of the American Pitt Bull Terrier.  They have no salaried positions and are made up entirely of volunteers.

The other half of that fifty will go to the Fayette Friends of Animals  I have been an animal owner all my life.  I grew up with three dogs and have four cats of my own, these days.  My daughter loves all animals and even though she is six, she wants to be a veterinarian when she grows up.

Now, I'm not going to just use this post as karmic horn tooting.   I have a challenge for all you.   And, I am asking this as PROOF that there is good in this world.

I suspect it’s there.

I’ve seen some hinting of goodness among the ridiculous hatred and bigotry and whatever.

Left/Right… Black/White… Gay/Straight…  whatever.  I want that shit stopped or at least lost in the sea of good people doing good things for each other out of the goodness of their heart.

SMASH IT FORWARD
If someone has ever done something for you, whether intentional or unintentional… I want you to do something nice for someone else... a stranger…  a group that does good things…  a person who needs it more than you.  Whatever...

I don’t care if it’s a stick of gum or a new pair of shoes.  DO SOMETHING.

I AM PUBLICLY SHAMING YOU INTO DOING A GOOD DEED HERE.

Get out there.  Prove me right.   Keep it going.

In fact, if you can prove you did something good for someone else without financial gain or overt prodding… other than this call to action,  I’ll give you a shirt. 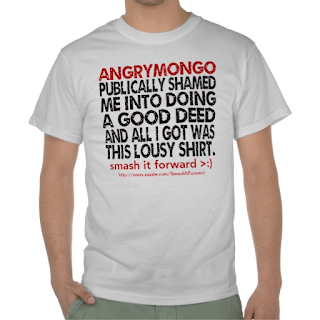 That’s right.  You prove to me that you did a good and selfless deed and I will give you a free shirt proclaiming your big ole dorky heart.

Now, if you want to buy one, sure.  I’ll donate $1.00 per shirt to a different group each month.  You tell me which one and I will take the majority of selections.