Do That Voodoo That Your Hairdo Does So Well

I am truly blessed. At 33, I still have hair. Now that may seem like a hollow victory to you, but to me it's a boon. A lot of guys my age, including some coworkers and a few former classmates have joined the bald brigade. Now, I don't mean to make light of their deficient pates. That would be a follicle faux pas. Really, they don't look that bad with the way high and tight hairline, but, quite frankly, I couldn't pull off the look. I've never had my hair short enough to check out the contours of my crown, but I assume that it is not smooth. In fact, I would be better off driving a car on the roads of Southwestern Pennsylvania with a scolding cup of hot coffee perched in between my legs sans lid than to believe that my head would be a smoother surface. So, to that I thank both my parents and whatever genes they passed on to me that has allowed me to keep this head o' hair o' mine. Looking back at my life, I've discovered that my hair has changed dramatically over the years. While I fashion myself as the kind of person who finds something that works and sticks to it, much to the boredom of the girl who does my hair, I have gone through substantial styles before settling on the one I sport now. 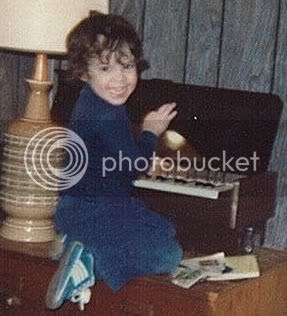 I wish my brother George was here.

Aww, ain't he just the cutest thing? Wow, oddly enough, I remember these pictures being taken. You can see that I had quite the coif. For some unknown reasons my parents decided to keep me with long hair off and on until the age of four. From then it was your basic boy's cut, a little shaggy around the bangs, but for the most part short enough for a kid in the late 70's/early 80's. Of course that would all change once I reached adolescence. I went through a rather strange phase where long hair was what I wanted.

Uh, oh. Yeah, I had a mullet. In fact, I was dead set on having hair like Richard Marx. If I live to be a 1000 years I will never understand what I was thinking back in those days. Why I thought that it would be cool to sport the mullet isn't as ponderous as why I would pick an 80's soft rocker to model mine after. I would have loved to been able to sport a MacGyver Mullet, but all the duct tape in the world would never help me as my hair was too thick and dark to achieve his grandeur. Meanwhile, I spent way too much time in the morning working on my hair. I would wash it and then blow dry it. I had a daily ritual of blowing it back for a few minutes, then I would pull the brush forward allowing the dryer to blow it up into place. Not satisfied with the fact that it would take me as long as Tom Hanks in Castaway to grow said hair, I began to wrap the little rubber bands from my braces, that we called bicycle tires, around the ends in order to create a pony tail. It was more like a Doberman's tail. It had maybe an inch in length and looked rather ridiculous. By the time I was in my senior year of high school I scaled back the growth and kept to off my neck as much as possible, but I had moved from Richard Marx to Fred Savage in terms of poofiness. 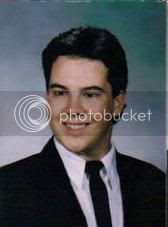 Yeah, don't ask about the vest and the skinny tie.
Since then, I've only had one other occasion to wear my hair down to there as I did a show in 2001 that required me to have a 1950's rich boy cut. I played Ray, a golf pro and aspiring writer in Neil Simon's Proposals. Not only did I have to bring the bouffant, I had to wear this stupid outfit that showed off my pasty white legs. It was reminiscent of a Boyz II Men outfit from the Alex Vanderpool Era of "MotownPhilly" and Cooleyhighharmony. I was not thrilled. But, in true fashion, once the show was done, so was the do. I have yet to find a reason to grow my hair to that length, but I have become accustomed to having a dirty chin. 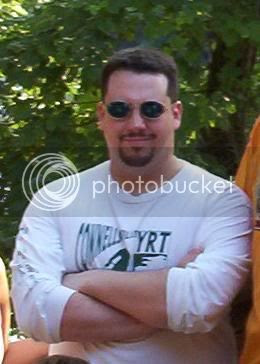 When you're this cool,
the sun shines on you 24 hours a day.

Since 2003, I've been sporting a mustache and goatee, mainly at the behest of my wife. She thinks that because I have such a boyish face it would give me some maturity. I think it's mainly because it gives me one chin and hides the other. And while I made a promise to myself to never color my hair like a lot of kids have done since I was in high school, I can see that there is some salt amongst the pepper. At first I tried to just extract the intruders from both my head and face but it has proven too painful as where one would be removed, two more would show up in its place a few days later. At 33, I feel that I'm a little young to be getting gray hair. My father has just recently begun showing more gray than he had previously, mostly do to his recovery from renal cell cancer. Both he and my grandfather had retained their dark colored hair for most of their lives. My grandfather lived to be in his 70's. While my father is 67, he just started going gray in the last 6 years. This was something I had hoped to have inherited but I guess I should be thankful I still have hair to turn gray. I've always wondered if I would color my hair had it gone gray and I don't think I will. I have no shame in having the gray and while I'm approaching middle age more in feeling than in actual years, I still have the mind of youngster, albeit not the tolerance for teenagers that I once had. Hopefully, my daughter can save me the anguish and be a little more mature in her teen years.

In any case, over the years I've gone from trying to grow my hair really long to wanting to keep it rather short in order to reduce care and maintenance. I am truly a victim of the times when it comes to the pictures with my revolving hair styles. The fact that I'm sharing them with my 2.5 readers shows my courage under dryer. Then again, it could show how vain I am about my hair and the fact that I've kept it this long. There were times I was afraid that my forehead was employing eminent domain over the rest of my scalp, seizing up property that was reserved for my hair. Thankfully, my hair line has been as sedentary as the Korean DMZ.

I had mentioned before that I bore the hell out of the girl who does my hair. When I walk in every four weeks and sit down in the chair, she always asks the same question, "What do you want to do with it?" With that question I offer the same reply, "Same as usual." I'm as routine with my haircut as I am in the person who cuts it. When I was a kid, I went to the same guy who married my mother's stylist. He was an artist from Nebraska and quite frankly, he was a better artist than barber. While I would constantly ask him to cut my hair a certain way, I always ended up with the same style. His prowess for cutting my hair showed the same amount of skill that I did in shop class. We could be tasked with making anything from a lamp to a bookshelf and I'd end up making an ashtray every time.

Once I began paying for my own haircuts I went to who I wanted to, a woman. I'm no dummy. I hear all the snide remarks about going to a stylist or a salon but I would rather have a female touching my hair than a guy. I have friends that swear by barbers, saying that you go in, and you're out in five minutes and in between there are a plethora of magazines to read ranging from Playboy to Penthouse. While, I'm not usually a reader in the salon, I do tend to scan through the local paper on occasion. From college to graduation and beyond I have gone to only a handful of people to do my hair. There was that brief stint where I went to the salon chains that promote a $10 haircut, but for that $10, I could have had a rat chew a better pattern out of my skull. While barbers and Fantasic Super Cutups Scams are cheaper, I like the quality of the work. Now, a friend of mine used to go to only the big name mall salons that charge you $100 for a style and then require you to pay an additional $50 for product to keep it looking like it does when you leave the store. I can't see being that crazy about a hair cut and frankly, I could spend that $100 on better things and just grow my hair long. Either way, I'm still going home and washing it again to get all those bristly clippings off my person that drive me nuts. No, I'm quite happy going to the local shop, paying $20, and having my girl, Lea, take care of me. She's a hell of a lot better looking than Howard McNear, if anything. Once in awhile our schedules don't mesh and I'm forced to use someone else in the shop. At this point in my life I don't have a clear grasp on what style Lea gives me and trying to explain it is about as easy as ordering a drink from Starbucks. I guess I should have her explain it to me but quite frankly, it's over my head.
Posted by Mongo at 7/23/2008 02:56:00 PM

Come on, that mullet was totally awesome! You should grow another one, just to taunt your follicularly challenged friends.