I am the master planner. I can plan for any occasion whether it be a holiday, a vacation, or a business trip. I just can't seem to follow through ahead of time and be ready when said event occurs. Take for instance last Fourth of July. My wife was 9 months pregnant and a scheduled caesarean section would bring our daughter into the world on the 5th. I've had 9 months to plan everything in order to be ready for her birth. Get the house ready, get the nursery ready, get me ready for that little one to come into our lives. So, as the master planner that I am, why do you think I was scrubbing walls and cleaning the house on the Fourth of July? Good Question. I don't know the answer. I wish I did. A lot of things got left by the way side after she was born. I never cleaned out the gutters. I didn't get finished ridding the yard of leaves. Hell, Christmas decorations started going up on the first of December and were finally done by Christmas Eve. My wife and I devoted a lot of our time to the baby and let everything else get away from us.

This year I made the decision to be ready if it killed me. We had it all planned out. It's not like it was going to sneak up on us. The 5th of July happens the same time every year. We began planning in April. We knew it was a Saturday. I made arrangements to be off most of that week so that I could finish up last minute details. With a month or so left to go we sprang into action. Each weekend was our optimal time to get things done so we had the little one shipped off to babysitters while we worked. How sad is that? After a year of being parents and we have people baby-sit for us so we can work? We don't even get to enjoy the freedom of not having to be parents for that little bit of time. I made the declaration and probably will not be able to follow through with it but I made it anyway. After this we are taking it easy. Last summer flew by as we were sequestered into the house to take care of a newborn. This year, at least the second half of the summer will be there for us to enjoy. As of the time of this blog post, we have yet to enjoy anything but a baby who can walk and be absolutely adorable. We also just stare at the pile of presents and the disastrous state of the house and wonder if we'll be ready for the holidays. It's a vicious cycle.

Back to strategy. We went to the party planning store and picked out balloons, themed cake plates, themed napkins, and overall color scheme. With three weeks left to go we made a trip to the big store that is the most evil place on Earth and got all our plastic and plates for the rest of the food and finalized our menu. The only thing that was taking forever was my grill since it was loud and clangy and the only time I had to assemble it was when the baby was sleeping and that was not the best time to be making noise. With two weeks left to go we ordered the cake and made arrangements to have tables and chairs. We didn't know the total amount of guests because the RSVP date was the 1st of July. We initially sent invitations for a total of 50 people. Yes, we are nuts. By the end of June we had 10 people for sure. My wife, fearing that we would be stuck with a lot of food told me to just start inviting people. Did I mention we are nuts. As of the 1st, we had 30 people and more to come. With one week to go before the party we began to panic. The last count was 46 people and now we were afraid that we were going to run out of food. Is a full keg too much? Should we get a full and a half just in case? When do we start setting up everything? Will this rain let up? Seriously, it rained everyday that week except for one day which I used to cut the grass.

It appeared that no matter how much we planned ahead of time a lot of things couldn't be done until the last minute. I had no real storage areas for all the tables, so they couldn't be picked up until that Friday and then had to sit in the garage up against the door. That was a real chore. We secured six 8' tables and 31 chairs. I was afraid that the chairs would be wooden and not very comfortable so I made a suggestion to people to bring some of their own. That way, I didn't have to get as many from the church. After all, I was trying to make this as simple as possible in order to maximize my time of assembly. All tables and chairs had to wait until Saturday morning because of the poor weather. Also, I borrowed a tent from my parents which required four people to assemble and they offered to show up early to help.

My father in law was so worried that if we waited until Saturday to pick up the beer that it would be nothing but foam. It needs to sit for 24 hours. I wasn't about to leave it outside in a tub of ice, only to keep icing it down or find it stolen by some lucky passerby. I couldn't keep it in any of my fridges. If I left it in a tub of ice in my garage it would have to still be moved and sloshed around. I opted for taking my chances with the foam. Balloons couldn't be picked up till the day of the party, neither could the cake. I also had to assemble the backyard on the premise that it would stop raining on Friday. Again, every huge task had to be put off until the last minute.

Saturday morning played out like this. Woke up and had breakfast. With my friend in tow, we went to the distributor and grabbed the keg. Came back and unloaded the keg in the backyard, iced down. Went to the party store to get the flowers. Went to the bakery to get the cake. Began setting up tables and chairs. Got the tent set up and began icing down water and pop (soda for you non Mid Atlantians.) By now it was 3:00 PM and time for guests to show up. I quickly changed and greeted people as they came. My wife and her mother readied all the non grilling food while I entertained and pointed people in the directions of food, drink, and card table. At 4:30 PM, I began grilling up hot dogs and kielbasa. We ate, and proceeded to sing and open presents. By 8:00 people had their fill but still held out for a mini fireworks display at dusk. After everyone left around 9:30, the cleanup began. Before my parents left, the tent was disassembled and back in the garage. My wife and her mother cleaned inside, my friend and I worked outside, and my father in law watched the baby. All 6 tables and 31 chairs were back in the garage before 11:00 PM. I had a shower, had a quick snack, and off to bed.

Come Sunday, we still had to return all the chairs and tables, which we did by 2:00 PM. We then took the remainder of the keg to a friend's house and tried to get rid of it to no avail. I came to terms with the fact that I would have to give back half a keg but didn't care. The tables were gone, my house was empty, and life could return to normal.....right? My poor friend who came in from out of town on vacation only to work his ass off for me. He may never come back.

In the end, the party was successful in that it never rained, we had tons of food, and everyone had a good time. My back will differ with this assessment as will my feet. I learned a few things along the way. Yeah, a keg will foam up for a few hours after it is put into place, but a pitcher does nicely to alleviate the problem. Our church is super nice and super accommodating, I'm glad we picked them. Who ever writes the instruction manuals for grills should be shot....no worse, tortured following instructions with as much ambiguity as the manuals they had written. I suck at horseshoes. And who needs a MasterCard commercial.
Half Barrel of beer for party - $82.00
2 layer cake with strawberry filling that serves 50 for party - $50.00
Balloons, decorations, napkins, table linens, and banners for party - $70.00
Six 8' tables and 31 chairs for party - $0.00

Seeing this face as she dives into her smash cake... 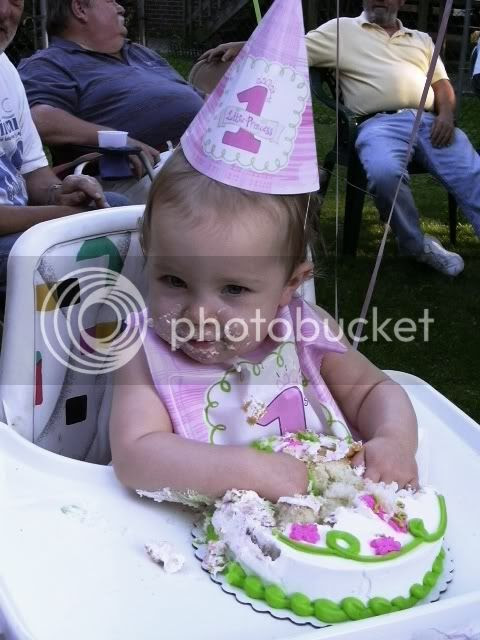