There's a Nap For That

I felt I had to sneak in one last post before I’m off to tame the OBX on a much needed vacation. Preparation for such an endeavor requires that I take at least a small nap before departing as I am going to be the primary driver for almost all 12 hours of the trip. Of course, we will stop every couple of hours because of my daughter and in-laws. We’ll need to do a diaper change…my daughter, not the in-laws. We’ll also need to make sure my Mother-In-Law doesn’t sit too long because of blood clots. In actuality, I could probably drive the entire distance with no more than a few red bulls, a couple of Stay-Awakes, and an bathroom every now and then. That’s not necessary, though, as my wife will do some of the driving in key locations. But this is all contingent on that nap I must have. One, I know I will undoubtedly not get.

Something always gets in the way when it comes to a good nap. When my wife and I were first starting out living together, it was nothing to take a weekend afternoon and just catch a couple hours of extra sleep. I lived in a town house and didn’t have to take care of the yard and cleaning was an easy task. Even when we bought our first home, we found a few free hours, during the weekend, when we just needed to take a little snooze. Then, our daughter came. Suddenly, nap time took on a different meaning. Instead of catching a few Zzz’s when we weren’t busy, we began using our little one’s nap time as a chance to get things done. That wasn’t always a possibility, though.

My kid is a bit odd in that respect. She can sleep 12 hours through the night, and have a two hour nap in the day time and yet I find that when she’s done, you don’t move. Having creaky hardwood floors in our house doesn’t allow for much sneaking around. When’s she’s 16 it will be a benefit, but for now, it’s a hindrance to grabbing dirty laundry from the bedroom, cleaning the house, or even cutting the grass, outside. The kid is a light sleeper.

I can remember when she was just born, I would get up to feed her every two hours. Those two hours consisted of getting her out of her crib, checking her diaper, getting her bottle ready, feeding her, burping her, changing her diaper, rocking her, and laying her back down. Then I had to go clean up. By the time I was able to get back into bed, it was time to start all over again. Those first three days nearly broke me. I never thought I would get to sleep through another night. And when she went all night without waking up for the first time. My wife and I still didn’t sleep. We kept thinking something was wrong. Why isn’t she making any noise? Is she breathing? Is her blanket smothering her? If I go in there, I’m liable to wake her up, ruining what we have just accomplished. That was one of the longest nights of my life. It’s been downhill ever since with her. She sleeps great at night, but naps are still a fragile balance.

Click the image to get this design on a shirt or other item. 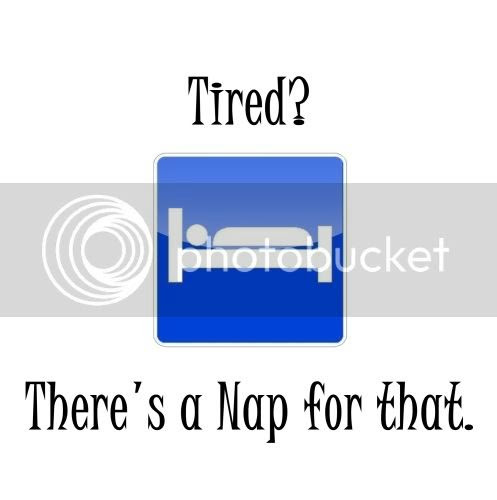 Get more from the There's a (blank) For That Section
on Mongo Angry! Mongo Smash! The Store.

So, when I declare that I am going for a nap before I make the trek in the Family Truckster, three things will happen.

The only reason she won’t come barging in is because the door is locked. She has the ability to turn door knobs and open doors, now. We confine her to one floor at a time and within our sight. The kitchen and dining room are blocked off and the door to the bedrooms and bathrooms of our ranch home are shut. Our bedroom is the only one she is fascinated with but the door latch isn’t the best. We can lock the door and shut it without fear of being locked out. A simple push on the door near the knob opens the door, easily. While she can turn knobs, her ability to push a locked door open is still limited. Although, while on her little scooter, she can achieve ramming speed. With that mode of transportation she might easily be in the room in no time. Then she will stand on the side of the bed, her head just clearing the mattress, and begin to repeatedly say, “Mup. Mup. Mup.” It looks like I’ll be putting another pot of coffee on while I pack the car.

While I’m gone, I hope I will be able to capture some great images to throw up here. I might even get a moment to do some shirt designs, although my wife will probably shoot me for opening up my laptop while on vacation. I cannot guarantee that I will post anything this coming week because I have an acute sense of survival, but I would like to address the changes made to CafePress while I’m gone. It may spell the end of Mongo Angry! Mongo Smash! The store.