It's like something out of a disaster movie, or a bad Roland Emmerich one. Nature gone awry. The coast along California, specifically San Diego, became littered with hordes of humboldt squid, also known as red devils. These squids, who live roughly one year, can grow to around seven feet long and weigh over 100 pounds. Not bad if you like sushi, but pretty horrible if you are a diver in the region as there have been accounts of the squid attacking divers. Make no mistake, these squid are carnivorous and have sharp teeth. But what has caused this beaching of the diablo rojo? 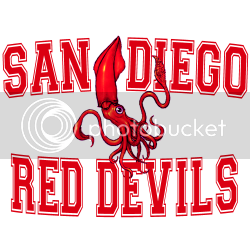 Consider this. There was a similar occurrence of the humboldt squid in the Monterey Bay in 1997. Granted, the impact wasn't nearly as huge as the squid sunning themselves on the San Diego sand, but there was also something else happening at the time. The Atlantic had seen a fairly mild hurricane season with only eight total storms, three hurricanes of which one reached category three. The Pacific saw nine with seven category three or better. Evidence of this lessened Atlantic hurricane activity points towards El Nino as the cause. This year, the Pacific has already seen four storms, one being a category two hurricane. 2009 looks to be a repeat for El Nino which hasn't been confirmed as the reason for the squid sightings but suggests as such. 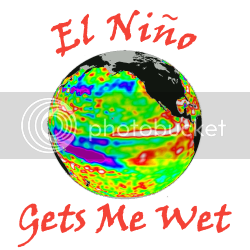 GetEl Nino Gets Me Wet
at Mongo Angry! Mongo Smash! the store