I Was Scooping Up Cat Poop 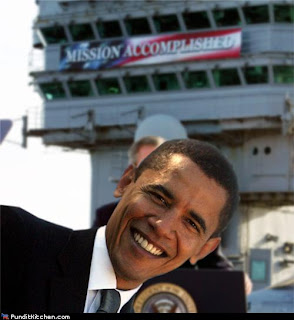 Everyone wants to have that philosophical, frozen in time debate about where they were when something happened.

“Where were you when…”

Given that the average teenager has limited experience with Jackson’s music, apart from Akon working with him in his final years, I’m thinking that Bin Laden’s death will rule out.   Just saying.

In any case, we have way too many ‘moments in time’ for us to keep remembering every little detail.  However, I have the feeling that when anyone ever asks me where I was when I heard Osama was killed, I will be able to recall exactly what I was doing.

I was scooping out cat poop from the litter box.

My wife yelled down to say, “They got him.  They killed O[inaudible].”

She yells down again, “They killed Obama[inaudible].”

I dropped the scooper into the litter box.  My heart jumped into my throat.  Someone just assassinated the President?!?!?

Turns out the first time she yelled down she said, ‘Osama Bin Laden’.   When I asked her to repeat it, she flubbed it and said, ‘Obama Bin Laden’.

Regardless of malapropisms, I stayed up an extra hour to watch all the coverage and nearly slept through the alarm this morning.   My thoughts swayed between relief that they had finally gotten the man responsible for planning the 9/11 attacks to fear that retaliation would commence while we celebrated.  After all, there is a need for Al Qaeda to establish relevance in the wake of this news and that scares me.

Then I heard the news that they buried the body at sea.  That’s just flipping wonderful isn’t it?  We just endured the onslaught of Donald Trump crying, “Show us your papers, Obama” for the last few weeks, now we’ll have continuous cries of “Show us the body.”   The naysayers will probably do the following.
Has it really come to this?   Are we really that divided of a nation that we look at every little thing that goes on as a conspiracy?  Can’t we just take a little comfort in the fact that a terrible person has come to justice, one way or the other.  I’m not going to go out and dance in the streets but I’m glad that those affected by the attacks in 2001 are one more step towards closure.

I’m also glad I wasn’t doing anything embarrassing when I heard the news.   “Where was I when Osama was killed?  Oh, I was in the bathroom, having an intestinal issue.  It was taco night.”


As a footnote I would to extend my sincerest support for those who have fought and died to protect us from harm.  I also commend SEAL Team Six for pulling off this operation with as little loss of life as necessary.