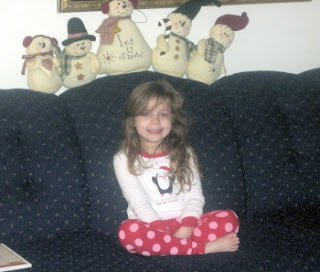 Twice a week, I pick my daughter up from the petri dish that is Kinder Care.  This is where she got the stomach flu from last week.  Apparently, there were four cases prior to hers and we just found out about them today.

On our drive home we discuss what she did that day and I ask her, "Were you good, today?"  to which she replies, "Check the sheet, Daddy."

She then asks if I brought her Bunny Milk, better known as Nestle's Quik.   I tell her that I came straight from work and didn't have time to stop and get some from home.   She gets a little upset and doesn't understand why I don't automatically have some on me when I drive the hour long commute from the other side of Pittsburgh.

She asks all kind of other questions like why it's dark or daylight outside when I pick her up.  Since late November, I've explained that it gets darker at an earlier time during the Fall and Winter, and in the Spring and Summer, it stays daylight longer.  This baffles her.

So, here it is the second month of Winter and it's starting to stay lighter, later, and she asked why.  I told her again about the seasons and then asked her if she knew what the seasons were called.

"No,"  I said,  "That's a holiday in a season."  I then called out the seasons and asked if she knew what was the first season of the year was.

"Correct!  Now what comes after Winter?"

"They just keep repeating.  Winter, Spring, Summer, and Fall.  Got it?  There's four.  OK, now, which comes after Winter?"