Google Street View can be useful for a lot of things. If you want to know where the entrance to a parking garage is, or how close a parking spot is from where you need to be, it’s invaluable.

Then, there’s the sheer joy of just looking at the city without having to get real close. You can travel down the streets looking at the architecture from the comfort of your living room. After all, Pittsburgh has been given so many accolades over the past few years, it’d be a shame to not take in all that splendor. And this way, you don’t have to get involved in road rage incidents with jagoffs that make Pittsburgh lefts.

However, you have to wonder if Google does a lot of quality control in their selection of filming. Maybe they just turn the camera on and go. Perhaps they do a few passes to make sure that they don’t have anything inappropriate in the shots or a bug on the lens effing it all up for five blocks.

Sometimes, I think that the folks at Google have to have a sense of humor. Because otherwise, why would you let this be a part of your Street View scenic landscape? 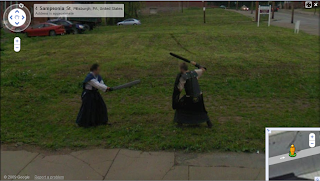 In addition to all the accolades Pittsburgh has received, I think we need to get an award for Most Samurai Friendly city.   Now, this, of course, is slightly less as prestigious than when South Union won the, “Best Place For a Ninjas to Break in Cars” award.   But, it’s almost on par with Scottdale when it won, “Best City to Abandon Your Kids For Ninja Practice”.

Now, my brother emailed me this picture, so he gets credit for bringing it to my attention.  But, it didn’t stop there.  Why would it?   You never know what’s around the next corner.  So, my brother sent me the link to this street corner. 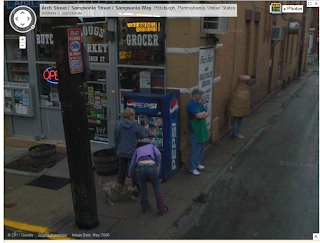 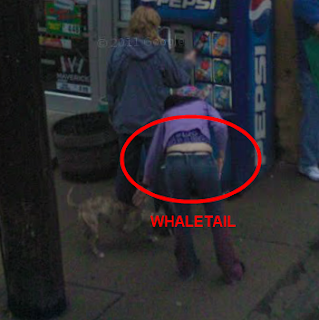 But, more importantly, WTF is in the alley? 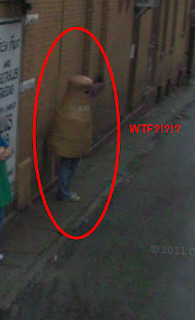 Here's a better view from the opposite direction. 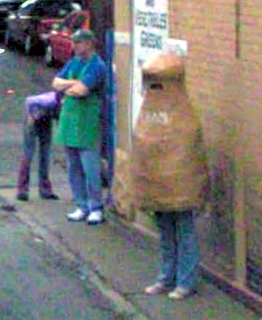 It looks like a half assed Matryoshka doll or homemade Gloop costume for Comic Con.  For you kids out there, Gloop is from a cartoon called The Herculoids.

Still, I have no idea what the hell that thing is. It’s got feet, so somebody is standing under whatever that is. And that guy, with the apron, must work at Doug’s Market and he’s unfazed by all this. Maybe he saw the samurai fight in the distance and didn’t notice the thing next to him in the alley.

So, if you’ve got time to kill, wander around Google Street view in your town and see what you can see. ﻿

This is from novel To Kill a Mockingbird. Scout is dressed as a ham for a play. She is embarrassed. She runs home in the costume and get accosted by a man who is mad at her father, Atticus. Boo, a mentally challenged neighbor protects her and kills the bad guy.