A few years ago I embarked on a quest to lose a shit ton of weight.   I even put a little widget in the corner to track my progress.
Well, I failed.
I failed because I became bored. I started right after Halloween and lost twenty pounds by December.  Then, Winter kicked in and I couldn’t get outside and the holidays came in and destroyed my attempts to not eat as much.   By October of 2012, not only had I gained those 20 pounds back, I also packed on another 15 and looked horrible.   Granted, I wouldn’t have looked great no matter how much I lost.
In any case, December of 2012, I came down with a severe case of bronchitis and my kid had the stomach flu, which made me not want to eat anyway.   So, I thought it would be a perfect time to start over.  I immediately lost 10 pounds just from being sick and avoiding food for fear of throwing it back up.
But, this time, I hit that plateau right where Spring kicked in and I could get outside.  Then, in July, I started feeling that complacency and the weight was started to trend back towards 275.   So, I kicked it back into gear and started walking in late August.  Now, I walk nearly every day at work, before lunch.  What started out as a few laps around our office building parking lot has increased on a steady basis with distance and speed.  I am still working on portion control and that has been the biggest part of my being able to not crash and binge heavily on food.
Now, I’ll give you the proof.  I'm usually not one for putting my big ugly mug up on the Internet, but I thought it was important to give you a look at how much difference 33 lbs. can make you feel about the way you look.  It's enough to make you want MORE! 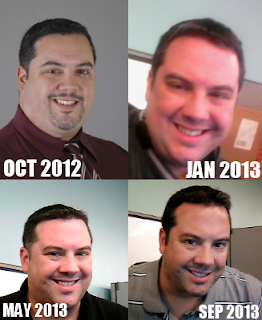 This is four separate shots, using roughly the same position to show where I was in October of 2012 (Upper Right) through roughly four month periods until this month, nearly a year later.  Starting weight was 295 lbs.  Currently, it is 262.
So, it’s still going to be a struggle and my target date has now shifted ahead to accommodate my ability to not lose focus.   That’s the one thing you have to remember.  Don’t lose too much, too quick, or you’ll think you’re done.   You need to slowly move towards a new life.  Patience.  Perseverance.  Positive Moves.  Never let anything stop you.  Use any and all obstacles as a driving force.  Turn negative energy and thoughts into fuel.   Keep Going.
Posted by Mongo at 9/16/2013 04:13:00 PM

WOW - way to go!! You've inspired me. Eating is my main problem. Fortunately, I have a killer metabolism so I don't have much of a weight problem, but I'm just not as fit as I'd like to be, and I'm certainly not as healthy as I should be. My biggest problem is, after coming in from work, I don't want to cook. So I have two options... any food that can be prepared in less than 10 minutes, or takeout/delivery. What is your recommendation for the lazy/overworked? I'd love your opinion!

Killer metabolism? And this is why I shall hate you forever. lol.

My only advice would be to either hold a grudge against something that forces you to do the work... or do it when you have time where you're just sitting there reaching for the Candy Crush or Buzzfeed.

I just forced myself to eat less, so I still have pizza, carbs, etc. I just have them in smaller portions. I also walk 20 minutes before I eat my lunch. Yeah, it's not pretty, but it gets the job done.