Where the hell did September go?

Take away all the games for the whole team, not just the rookies.
You can’t sit there and blame the rookies for not doing things the Steeler way if the rest of the team isn’t doing it either.

The Pirates
In the past, I have tried to temper my bandwagonning with the reminder that it has been 20 years since I was able to proudly call myself a Pirates fan.  The last three years I have been sucked back into being enthusiastic, only to be hurt again like a battered spouse.  But this year was finally the year.   The curse of Bonds/Bream is gone.  The 20 years of losing are gone.  The “We only put a profitable team on the field, not a winning one” is gone.  So, now the question remains… is this one game playoff series with The Reds going to be a step towards St. Louis or a step towards Moneyball when Minnesota trounced the A's?

The Penguins
The long road back to Lord Stanely begins.  Still not sure about Fleury. Vokoun nearly died from blood clots.  I've already forsaken the Steelers for Pirate games.  Will the Pens take the place on Thursday?  I kind of hope not...until November.

The Duck
Look at it.  The Duck has cometh.  The thing is huge and it needs to be moved to be in order to be seen on camera during tonight’s game.  My hopes is that only Pirates will be launching the long ball in hopes of connecting with the Quacken.

That being said,
RELEASE THE QUACKEN! 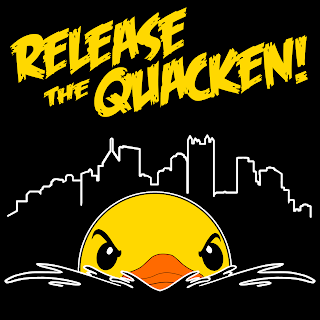 YouTube Update
Because this month has been so damn busy I have been remiss in putting up some videos.  The Sims3 is still being worked on as is Minecraft.   The problem is, with Minecraft I’ve been involving my daughter in some videos because she’s so stoked to see the stuff I’m doing.  That means a lot of footage has to be edited and I can’t be my normally vocal self.  So, be patient and get some views in so I can keep doing this.