For the first time, out of four missed opportunities, I went back to high school by attending my 20 year reunion.  In fact, this whole year has been a trip back to the days when I was young and stupid.  Now, I’m just older.  There’s a reason for all that, but that is not part of this story.  Let’s just say, I’ve been reborn in a manner of speaking.

But yeah, the past year has been rife with nostalgia and old feelings, some good, some bad.  Friendships rekindled.  Odds renewed.   And, in the end, the universe comes back to remind you of your place in the social cosmos of the high school hierarchy.    20 years later, you still can’t crash the cool kids party and get away without being pounded with the reminder that you are still the same guy you were back then, just older and a little bigger than you were.

Now, I didn’t mind high school.  In fact, it was probably some of the greatest times I had.  Then again, it’s possible I blocked out a lot of the bad stuff.  The awkwardness gets pushed back into the recesses of the mind while the heyday of riding around in cars with no particular place to go, being irresponsible, and being young and giddy over the feelings that inhabit your still fresh heart and mind.  You’ve got the whole world ahead of you and tomorrow is so far off in the distance.

Then, 20 years go by.  Suddenly, the panic sets into your soul.   It’s been two decades and you have not accomplished one goal you set down on paper in that biography from the back of your yearbook.  You’re going to face down the ghosts of your past and they will see the failure in your life and they will suck the last remaining ounces of hope out of you.

So, I kind of set another goal for this milestone.  Try to get back some of those 20 years, so I can walk tall into that reunion.   I’ve spent the last 10 months working on losing weight, getting back into some shape other than round, and rediscovering that piece of me that I lost a long, long time ago.  And, I did that.  Now, I will be the first to throw myself under the bus when it comes to looks or physical stature.  However, compared to what I looked like this past October, I say, with all seriousness that, “I looked damn good.”

But, the universe will not let you change your stars and no matter how good I looked, I knew that I was just going to be “That funny guy whose kid is hilarious on Facebook.”  The great guy with a heart of gold.   The one every parent loved but no daughter would ever consider.   I was me.    All that build up.  The prep.  The thinking that, “This time, it’s different” meant nothing, because as soon as I walked in that door, I was back in high school.  Awkward.  Backwards.  I was me.

I ended up leaving early, rather than just hang about in the back, being an observer. And, from what I gathered from the pictures that actually made it onto Facebook, the party only got better after I left.  Not saying because…  Just saying it did.  The whole night was a disaster for me.  My brand new suit was like a heater and even after changing into shorts and a t-shirt to be more comfortable, I could never get comfortable.  I wanted to leave.

Why?  Because, what I failed to remember, from 20 years ago, was that I did everything I could to get away from that place.  Yeah, I hung around a few times, post graduation, because I still had friends there, but that school, that town, that life was not what I wanted.  I left for college and went as far as I could.  I landed in Myrtle Beach, some 600 miles away, and even though I transferred back to Pitt, a mere six months later, I stayed away as much as possible.   After college, I moved closer to Pittsburgh, adding to the distance.  But, after all that time, the draw of certain elements in that town made me think what I wanted was to be back in that world.  I was wrong.

My only fun came from an impromptu dance with one of the older ladies of the wait staff and joking with the bartender.  That’s who I am.  I go to a reunion to see people I graduated with 20 years prior and I have more fun with people I barely know and just met.

Which reminds me.  Last Saturday was a reunion of another sort.  It was a reunion between two people who haven’t been together in close to 60 years.   Early on, while making various attempts to flee to the parking lot to gain some composure, I noticed this older couple walking through the halls.  I smiled at them holding hands but paid them little mind.   When I came back, the dinner was over and the DJ was trying to ramp up the energy and get people moving.     Out of boredom, I went and moved the car closer to the building in order to hasten my escape.  When I came back this second time, there was a burst of energy coming from the ballroom.   What the hell was going on in there?

When I walked in, I noticed everyone on the dance floor sort of circling around, clapping and whooping it up.  As I got a better look, I recognized that older couple I noticed in the hallway absolutely tearing up the dance floor.   I couldn’t believe it.  We had been crashed by a couple from another party.  It was amazing.   They danced with each other and the guy shamelessly chased around women more than half his age and they ate it up.  One of my classmates was dressed in a leopard print outfit and this older gentleman looked like he was on safari, ready to bag big game.

I was speechless.   This guy.  This beautiful human being, unabashedly and successfully stole all the thunder from everyone.  I loved him for it.  I admired him for it.  He did what I so wanted to do and he was ten times better at it then I ever could have been.  I had to know what was up.

During a marathon dance session I spied his date, having a rest, and I took the opportunity to find out what their story was.   Because, you know, that’s what I do.  I ignore all the people I graduated with and seek out a complete stranger to engage.    Also, I love a good story and this one had to be a good one, right?  Turns out, they were at his class reunion from 1951.  I guess as you get older, you tend to forgo the “every five years” convention.  The gentleman was a retired urologist who, even at his age, still had the mojo.  But that wasn't even the best part of the story.  His date filled me in with the rest.

“We dated our freshman year of college.  Then we stopped.  He went off to war.  I stayed in school.”

“But you’re together now?”

“Oh, yes, and it’s been wonderful.    But during the years we were apart, I lost two husbands and last year, he  lost his wife.   But somehow, someway, we found each other, again.”

I was in tears at this point.  “That is way beyond awesome.”
Then she asked me, “Why aren’t you out there?”

“You know he’s 87 years old and he just loves doing stuff like this.  He loves being out there with those young girls.”

“You should get out there, too."

Then she laid the wisdom on me.  “Do you know how to make it work?   You gotta have fun.  You gotta be able to get out there and just have fun.   And, you gotta whisper sweet nothings in her ear, all the time.  BELIEVE ME, IT WORKS!”

“Thanks.  I will remember that.”

A few more dances and they decided to go.   Even though they were on a date, they had separate rooms at the hotel.   Somehow, I think one was going to go unused.

I finally got a chance to talk to the man of the hour and he and I had this special connection, somehow.  It was like I was staring into the future and I saw me.    And he kind of reassured me that, at 87, it doesn’t matter.  All the crap I went through to get to this point doesn’t matter.  That’s what tomorrow can be like.   He was my hero.    And then we shared that moment.  That look.  We both knew what his night had in store.  So, I told him,  “Pace yourself.  It’s not a sprint, it’s a marathon.”

He laughed with his entire being and said, “You got that right.   And I’ve finished every lap.”

Then, they were gone.  And so was I.  Bolted for the door before 11:30.  Spent the last two hours of my night watching the events unfold over Facebook.

It was a bittersweet moment.  I gained so much wisdom from those two beautiful souls.  I just hope he survived the night. 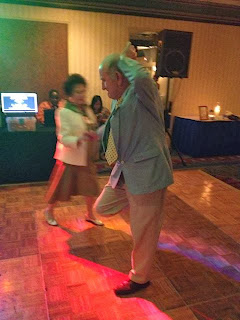