Weddings are a polarizing subject, depending on who you speak to.   To the involved, it’s a lot of stress and work over a year or more boiled down to one day of joy or frustration.   The problem is you’ll only remember it if it goes wrong.

To the bridal party, it’s an opportunity to really define the bonds of friendship.  How much of the bride can you take before you are no longer BFFs?   Let’s face it, grooms are easy.  If they’re awake, they’re fine.

To the families, it becomes a testament to micromanagement and tolerance of one another.   The majority of the costs usually fall to the bride's family, while the groom's parents usually pick up the rehearsal dinner and bar tab at the reception.  Then there's little sniping back and forth about the seating arrangements.  Who is closest to the bar?  Who gets to the buffet first?  Can we put Uncle Wears-bib-overalls-to-a-funeral next to the snobs from their side of the family?  If you're lucky, the fathers won't be involved in fisticuffs before the cake gets cut.

And to the guests, it’s an excuse to get sloppy drunk at an open bar, to ridicule the people at the party to their date, and to possibly do stupid things all for the price of a gift no one will ever use and an afternoon dressed up in uncomfortable clothes which will undoubtedly be disheveled by the bridal dance.

That’s what I did over the weekend.

It started out innocent enough.  My family travelled towards the middle of Pennsyltuckey for one of my best friend’s wedding.    We arrived on a Thursday night and stayed until Saturday.  We planned for minimal impact as I brought along a suit, a change of clothes and another backup shirt.   I was way ill prepared for the event.

Thursday night, my buddy stayed at the hotel, while his wife to be stayed at the house.  I decided to help him relax by taking him out for a few drinks with my Father-in-law.  We went to a little bar in Lewisburg called The Bull Run.  The night started out rather innocent.  We talked over beers and then it got interesting.   After a Blue Moon and two Smithwicks I decided to take up the karaoke microphone and serenade my brother in harms with Georgia Satellites’  “Keep Your Hands To Yourself”.  Not too bad.  Then a bunch of girls from Bucknell came in and it got even more interesting.   By the end of the night, I was completely trashed and singing, badly, “Save a Horse, Ride a Cowboy” to the coeds who turned out to be all together… like romantically.   It also didn’t help I was wearing a shirt that said, “Let’s get drunk and make some bad decisions.” 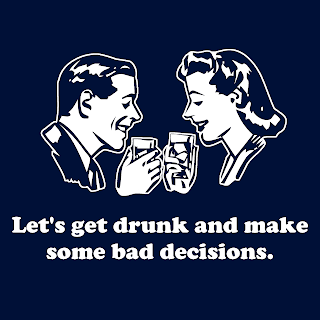 Let's Get Drunk and Make Bad Decisions
Friday, feeling not too bad, we went to the wedding in full suits.  It was outdoors and just hot and humid enough to melt.  My daughter was dying of thirst and proclaimed that “I am so thirsty that I hope it rains so I can drink it and cool off.”

It poured from the beginning of the four minute ceremony until the end.  Well played, universe.

Now, the typical person would look at this event and see an unmitigated disaster.  All the planning, all the stress, all the work, all gone in an instant with a deluge of water.  The superstitious person would take this as a good sign.  I took it as a chance for this couple to remember their wedding day forever.  And I told the bride, “You know that thing you worry about happening on your wedding day?  That thing that could ruin it all.   Well, that was it.  That is the worst thing that will happen today, I guarantee it.  And you know what?  It wasn’t that bad.   We got through the wedding in four minutes, you’re married, and no one is hot anymore.”

I forgot about the fact that none of us were going to be able to wear these clothes to the reception, unfortunately.  There was one guest laundry facility in the hotel and it was being used.  So, I ended up wearing the shirt from the night before and jeans, because it was the cleanest change of clothes I had to wear.

So, there I am in jeans and a t-shirt, seated at a wedding alongside people in suits.  Worse yet,  I was the best man and had to give a toast.  A toast I worked very hard on writing and was typed up,  printed out, folded in quarters, and nestled snuggly in my suit coat pocket.   It was a horrible mess and disintegrated in my hands.   But I used that.  I used that and the fact that I was now dressed in street clothes to get my point across.  I love these people, dearly, and it was probably the easiest speech I ever gave from memory.

I stood up and immediately acknowledged what happened to my clothes and pulled out the sopping mess of a speech to great laughs.   The audience was mine.   I spoke about how I had known the groom for 17 years and how he never took my advice about anything.  His past relationships came up, playfully mind you, and without malice.  Then I mentioned how the first meeting with his bride, during a vacation, immediately resulted in acceptance and love from complete strangers.  She was, in fact, the perfect person for him.  He had finally taken my advice.  Then, a cell phone went off, saving me at a transitional dead end.  It was the familiar ringtone of the Theme From The Godfather, emanating from a friend who everyone knew and I used that to my advantage to bring back the crowd.   I then proceeded to give the following advice to the couple.