Four of a Kind is a Full House

I've always been an animal lover. But I grew up with dogs. My first pet was a German Shepherd mix named Spider. The reason her name was Spider was that I couldn't say Fido at the age of 4. Still, Spider seemed to fit her. She was black and white and you never knew if she'd come after you. She wasn't exactly the friendliest dog, but she was my pal. We understood each other and she only bit me twice. The first was on my ass as she chased me up the yard when we first got her. The second was after 14 years and near the end of her life. She had become old and cranky and sometimes, you just had to put the food down and leave her in her box until she wanted to come out. She may have been old but she still had all of her teeth.

From the age of 4 until 23 I lived with dogs. I was never a cat person. I was always leery of an animal that made you come see it instead of it coming to see you. Cats always seemed like they were plotting. However, my then girlfriend, now wife, grew up with cats. You could say we were opposites about most things in life. She hates the spotlight and I am an actor, always willing to make a fool of myself. So, when we had a rough snow storm back in 2oo3 over President's day weekend, she and I went toe to toe over an uninvited guest that she rescued from the knee high snow.

For a few days we had been feeding a couple of rabbits that lived right outside the back stoop of my townhouse. One morning I noticed a cat sitting on the stoop. I figured he belonged to someone and shooed him away from the food that the rabbits were eating. I didn't want to find a dead rabbit out there. When I got home, my girlfriend was upset that I shooed him away as he looked emaciated and hungry. She spent the next two hours trying to coax the cat into the house. All the while, he cried and cried. Finally, he walked right into my townhouse. "Great! Now what am I supposed to do?" I said. "Name him." She replied.

At the time I lived alone and I was/am allergic to cats. She made a run to the store to get some food. I figured he could stay the night but I would make an effort to find out who he belonged to the next day. She came back with a litter box, scratch post, toys, and treats. Apparently, she knew more about his living arrangements than I did. Eventually, I gave up and he won me over when he walked up to me on the couch and head butted me. He looked grateful. Of course, I had to name him now and my girlfriend took him to the vet while I was at work. Turned out he was about 6 mths old, had been in a fight and malnourished due to worms. I gave him the first name. She gave him her last name. Oscar Moyer. 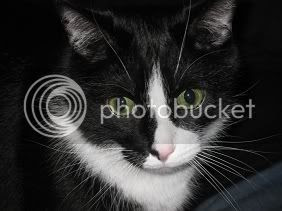 Oscar
Now, being a bachelor in a two bedroom townhouse, one would think a single cat would be sufficient. Any one who owns cats knows that you can't just have one. So, by November, my girlfriend convinced me to go get another cat. I checked out the local shelters and ended up at PetSmart. There in this huge cage was a tiny little black and white kitten with a white stripe right up it's face. She made an effort to come to me and definitely wanted my attention. I was done searching. I brought the newest edition home over Thanksgiving weekend, and I now had an Emmy to go along with my Oscar. 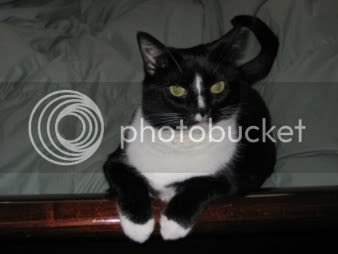 Emmy
But, it's funny how life throws you for a loop. It's like how some people can't stop getting tattoos once they start. The next year, I had finally proposed to my girlfriend and we got a house together. At three bedrooms the house wasn't exactly small, yet it filled up pretty quickly. It always seemed like if there is an animal that is lost or in need of help, they know how to find my place. Yeah, I adopted Emmy, but Oscar and about three dogs ended up at my place looking for help. Thankfully, I only kept Oscar. However, the rescue instinct in my fiancee was a still active and in hyper mode.

At the time, she worked at a farmer's market and people tended to just dump off animals thinking that they would have a good life on the farm. What they didn't know was that her boss hated cats. During the summer of 2004, someone had dropped off a pregnant cat who eventually gave birth. I'm not sure what happened to the mother, but I fear that he had something to do with it. One of the kittens also didn't make it as my fiancee said she saw the limp body outside the store one day. Two of the kittens were still alive and hiding out behind the store under storage bins. My fiancee told her boss in no uncertain terms not to harm them. She would take care of them. Unfortunately, she did not share this with me. After, I finally came down off the ceiling, I agreed to help get them with the understanding that we would get them a home that wasn't ours. Through perseverance and successful trapping, we managed to grab both cats and the sisters were reunited on our back porch. But, of course, they needed to be taken to the vet. A hundred and fifty dollars later, my fiancee was reluctant to give them up. We went round and round and I began to get puffy eyed and sneezed, uncontrollably, but eventually lost. Add Willow and Lucy to the mix. 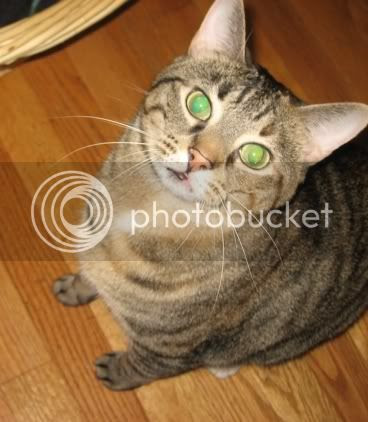 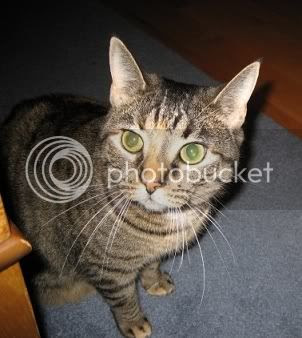 Willow
(Orange front paws and nose)
To say that I am now a cat lover would be an understatement. My now wife also understands that we've caught our limit, yet I still find myself putting food out at night for the six or seven stray cats that live on or around our property. But, nothing says love like the fact that you are willing to hold your dirty and wet cat on the side of the road while your wife cleans out a carrier of all manner of waste on a trip to the vet.

Emmy, you see has an OCD. She cleans herself constantly and has little tics like chewing the air when she's hungry, along with anything plastic, which she's allergic. Every year when we get decorations out of the attic, she starts to develop what have been called rodent sores. Usually, some antibiotics and prednisone will clear it up. It just so happened that the last outbreak coincided with her need for updated vaccines and Oscar's regular vet visit. Oscar, for being the moose that he is, is a big baby and hates going to the vet. Usually, we can tell if we're in trouble because he will begin to cry in a certain way that informs you that he just made a mess.

On the way to the vet he crapped in the carrier. The smell must have been overbearing because Emmy threw up all over herself. There I am on the side of a busy road holding this beast for dear life while he gets it all over my shirt. Meanwhile, Emmy is sitting in vomit that we didn't discover until we got to the vet. Again, I'm holding the cat, while my wife cleans the carrier. Add puke to the list of stains on my shirt. On the way home, we hear the cry again, and now we smell urine. I make a turn off the same busy road onto a quieter street so that we can clean the carrier, again. Unfortunately, I took the turn a little fast and Oscar must have been leaning on the carrier because it tipped over and it was like being in a port a john that gets pushed over a hill. Emmy's carrier was directly below him and managed to get some of the splash from the wave. Now, I'm standing on the side of the road again, while Oscar soaks my shirt full of urine.

With all these little inconveniences, you'd think I'd be angry. In the tenth months that I've been a father, I've never had any shirts completely soaked by waste and vomit before. But, all I can remember was just laughing there holding this dripping wet cat while the smell of pee flooded my nose. I love them and would do anything for them. But next time I'm cleaning the carrier.
Posted by Mongo at 5/17/2008 10:14:00 PM