Several posts ago, I went on and on about wanting to get a Nintendo Wii. I already have a PS3 which is great for me, but my wife and soon to be gamer Daughter may have some problems getting with the control system and some of the games I own aren’t exactly for more than one player or family oriented, at that. So, I went on a quest to get a Wii for the family. Now, compared to the PS3, the Wii is priced pretty low. However, where you make up the difference is all the additions. There’s the extra controllers and nun chucks. Not to mention the charging station as I’ve been told the controllers will drain a set of double AA batteries in a week. On top of that some of the games require some fancy peripherals like the Wii Fit Balance Board or Zapper. Once you get to the register, you could be looking at $500 and that’s before you really get any games. Speaking of games, the catalog of Wii centered game titles is a bit on the weak side. Anything that I can get for the PS3 I will probably do so unless it’s a family oriented title.

So, after much consideration and a good long look at my bank account, I decided that I was going to get it for free, just like I did with my PS3. Ever the cheap ass gamer, I immediately went and signed up with my old friends at Trainn on Your Nintendo Wii 4 Free. However, I really didn’t have the time to devote to another IFW site, right now, so I'm keeping it to get the $250 cash for free, instead. Looking at other options, I figured I could just start putting money aside or use any holiday or birthday money but that is always a problem when I look at my outstanding credit card debts. Every time I get extra money I throw it at my savings or debt. Since the Wii is a luxury item for me, it ranks low among my priorities.

Then, on a whim, I checked out my Visa Rewards Points that I’ve been accumulating over the last four years. When I signed up, I originally intended to use them towards plane tickets so I could take my wife on a real honeymoon. But, it would be years before I would be able to redeem enough to make it worth the wait. I checked the catalog over in full and found that for 400,000 points I could get a Wii. I thought, “Wow!” There it is. Then I checked my balance. I had half that already accumulated. It would take another 4 years to produce the rest at my current rate. Not to mention, I’d pretty much have to spend nearly $200,000 just to get all 400,000 points. I checked the catalog again and saw that I could redeem my current balance for around $220 give or take if I opted for cash or gift cards. That’s when it hit me. The price of a Wii is $249. I have almost that amount. I did it.

That’s half the battle. All the peripherals would cost close to that same amount. I feverishly put into place another plan of attack. Using my Paypal account and my checking account, I cycled 20 transactions a month of $1 each. Starting off with a $20 withdrawal from PayPal to my Checking account, I then put $20 back into my PayPal account, $1 at a time. Each transaction was worth 25 points giving me a monthly maximum allowance of 500 points. For every 2000 points I can redeem them for $4. Granted, it takes me four months to build up 2000 points by that method, my usual spending habits will make up the difference quickly giving me a monthly accruement of close to 7000 points. Every two months, I can redeem that for $28. If I can be disciplined enough to do the redemption, I can pay myself back in a few months time. Additionally, my birthday just occurred and my family gave me cash. Totaling all of that up, I now had more than enough to buy the Wii and all the extras.

Somehow, life has its moments and all of this got put on hold when my Mother-In-Law was diagnosed with a brain tumor. Her treatment and recovery have been nothing short of miraculous considering that she was diagnosed on March 12th, tested over that weekend, went in for surgery on March 18th and was home on March 20th. She’s due to get her stitches out March 26th. My wife felt extremely bad for dumping the entire world on me in order to help out, which was nothing. I babysat, drove my daughter to various babysitters, and just kept her at an even keel. But, she wanted things to get back to normal so, she took me shopping after her Mother got out of the hospital. This past weekend I had to go to four businesses to get everything but we managed to do it.

After my shopping spree, we came home and put our Daughter down for a nap. I figured I could get everything set up and have some time to play. Two hours later, I had it all setup and was settling down to do some zombie shooting when the little one woke up. Figures. I have been able to get in some game time and I’ve become addicted to beating my own records on Wii Sports. The Fitness part of that game said I was 64 on Monday and 29 on Tuesday. I just turned 34. I don’t think it’s very accurate. I will say that all the hype about injuries are real. My body is hurting. My arms hurt, my shoulders hurt, and my legs hurt. With any luck I’ll end up with a pulled Wii knee. It’s that twisted sense of humor that prompted me to put up these two shirt designs on the store. I’ve already sold one and bought one for myself. 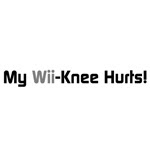