I’m splitting these posts up because there is just way too much to discuss. Your brains will be mush and eyes will be crossed and I will lose half of my readership which will leave me with 2 ¼ readers. So, deal with it.

As I said before, I was supposed to go to Las Vegas on business but that the conference had been cancelled. Since I already had charged the room and airfare to my credit card and had not submitted an expense for them, I merely decided… with the help of my wife, to just continue to go to Las Vegas as a sort of second honeymoon. Our first one was wrought the black death as my wife was seriously ill while we were in Niagara Falls in November of 2004.

We always said we’d have a “real” honeymoon but after two years of being married we were blessed with a child and things just sort of got put on hold. Spontaneity has never been our forte as we’ve experienced nothing but trouble in the past on various trips. Still, it was an adventure to be had. My wife had never flown and neither of us had ever been to Vegas.

After our flight we arrived at LAS we made plans to get to The Mirage. I was planning to rent a car as my original itinerary was solely based in The Mirage. A shuttle or taxi would be sufficient.

Taxi from the airport = Less than $20 and you get there a hell of a lot quicker.

Is the shuttle cheaper? Yes. Look, if you have no problem standing outside the airport for an hour waiting for the right shuttle to show up, save the $5.00. However, if you’ve just gotten done travelling for five hours and want to GET THERE, take a cab. In the end, you’ll be better off spending the extra money.

Now, all my built up expectations of Las Vegas were generated by the Ocean’s movies, the television show Las Vegas, and the old 70s show Vega$. I had no concept of geography. I basically thought that Las Vegas was this big huge city out in the desert that was wall to wall casinos and hookers. You could basically walk from one end to other and see it all. I had no idea that there was a downtown area (Old Las Vegas in my mind) where places like the Freemont Street Experience and the Golden Nugget resided along with one of the more iconic figures, Vegas Vic… the cowboy who looks to be hitchhiking. This is separate from “The Strip” which is where places like The Mirage, The Bellagio, Caesar’s Palace, New York New York, The Luxor, Treasure Island, MGM Grand. These are the more opulent casinos and hotels. I had no clue.

So, on to the Mirage. From the outside The Mirage doesn’t have any other discernible features that set apart. Caesar’s has the whole Roman motif, The Bellagio has the fountain, The Luxor is the pyramid, etc. Once you get closer, though, you see that the Mirage has this huge rock formation out front that serves as a nightly Volcano show, which is cool.

I found this on YouTube because my own video was lame.

Once you walk into The Mirage you have the check in desk to your right, some of the casino floor to your left and directly ahead is a dome with a wooden bridge and various flora and waterfalls which was very pretty.

After checking in we had to drag ourselves and luggage (one rolling bag, one purse, one laptop bag) through the casino towards the middle of the hotel where the elevators were located. The amount of traffic on a Tuesday evening was ridiculous. There were people everywhere. Old, young, kids, adults alike just jamming the pathways through the bleep bloop of slot machines with their digital clinking of credits being paid out, the sporadic cheers from a craps table, and occasional song playing over the loud speakers.

When we finally reached the elevators we were whooped. I was so looking forward to just falling face first on the bed. But first, we had to get to our room, 20123. You step off of the elevator and enter one of the three wings of the guest room floors. The design of the interior was a perspective Inception mind screw. The hallway looked longer than it actually was and it was still a hell of a walk. 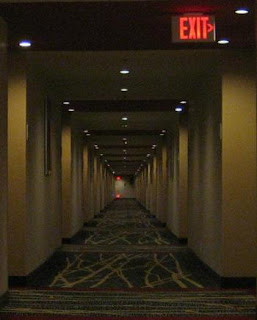 Next time, we’ll discuss the finer points of Mongo in hotel rooms and, later, the food which is what the real attraction for me to Las Vegas was.