I’m taking you on the tour of Vegas through the point of view of the angry traveler. We talked about flying and we talked about checking in, too. Let’s talk about the accommodations.

OK, so getting into the hotel was half of the fun, right? Now, that I’m checked into the Mirage, what is there to do? 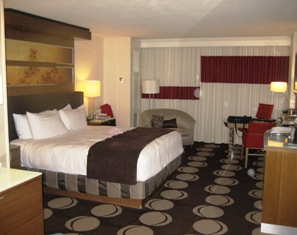 Well, first of all, the room was pretty nice. The furnishings were sort of modern but not extremely cold. The room was pretty big with a nice desk for the computer that sort of came out from the wall so you could see the TV. The bathroom was rather nice with a huge mirror with these very bright lights around it. It didn’t lie to you whatsoever. ﻿

There was a mini fridge which I didn’t dare bump for fear it would spit something out at me, charging me a gazillion dollars for a small bag of raisins or something.

Now, our room was facing the pool which was kind of nice. We could see Caesar’s directly across from us, Harrah’s to our left and way down towards the mountains, I could make out The Rio, which made for a real nice sunset picture.

Oh, and the funny thing about our room was that not only did it face the main pool, it also faced the dolphin habitat and BARE. If you don’t know what BARE is, it’s exactly what you think it is. The Mirage has a secluded pool area that is geared towards those wishing to go topless. I believe women get in for free and men have to pay. Not sure what the purpose of that is. So, the idea is to get women to take off their tops and get men to pay money to come ogle them. What other reason is there?

Unfortunately, the weather was a bit nippy and windy so nobody wanted to be brave. Believe me, my wife kept saying, “nobody’s there.” She seemed more interested in looking than I was. I guess because it’s something we’ve never been exposed to. (No pun intended.)

The only real issue I had with the room was that it was so far from everything. If the argument for hotels in Vegas is that the restrict the amount of amenities you have in the room which forces you to go to the casino then I counter with, “Fine, don’t put it so effing far away, then.” I had a couple of issues with room keys that caused me multiple trips to the front desk which was down the long ass hall, down the elevator, through the casino, through the jungle dome thingy, and over to the desk. If they wanted me to leave my room, they would have simply made the commute easier. I will say that after feeling cooped up and bored in my room made me want to just go gamble to waste time. Point to Vegas, this round.