Oooooh! I can almost feel it. We're getting there. Just 20 awesome teenagers left. 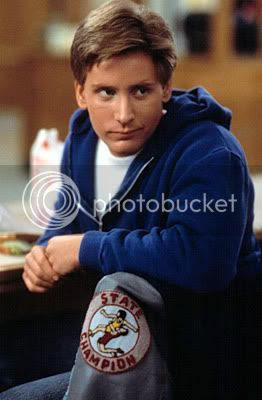 Andrew reported to Saturday detention, a product of his jock status. Like the other characters that live in John Hughes' universe, he was there for being what Vernon thought he was, a jock that follows the jock pack. His crime was taping Larry Lester's buns together. In some ways he did it for his team and his old man. Never being able to make decisions for himself. He was a sad case study in allowing cliques and high school politics decide who you are and who you can hang out with at school. Almost wishing a knee injury would permanently end his high school wrestling career. After that what would be next, college wrestling? Who gets the accolades, him or his old man? While originally he as ashamed to be in detention with the likes of the others, at 4:00 pm he took that one step towards being the person instead of the athlete when he turned his eyes towards Ally Sheedy's basket case. 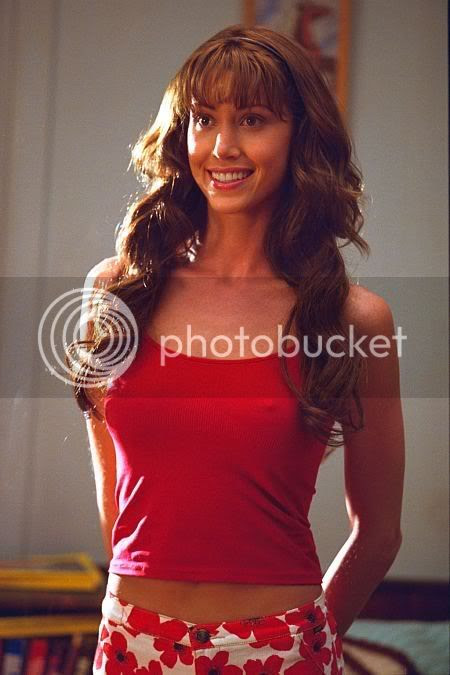 American Pie offered up little more than an updated version of every80's teen sex romp to come down the pastel pipeline. When Jim has the chance to try and seduce the sexy and well proportioned foreign exchange student, Nadia, his delivery is typical of every teen from Pee Wee Morris to Seth. However, we must not overlook the hottness factor of Shannon Elizabeth's Nadia. The fact that she doesn't want a jock like Aus or aprick like Stiffler only adds to her appeal. The fact that she sprawls herself across Jim's bed naked and takes to her own devices to pass the time lands her in the number 2 babe of all high schoolers. 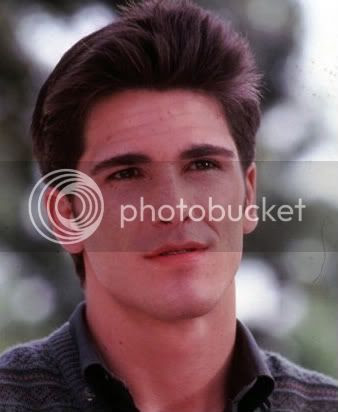 Jake Ryan is one of those few on screen studs that never gets the chance to woo you like he could. We are given no previous background other than he's rich and bored with his blond bombshell girlfriend, Caroline, exploiting their status as the "Power Couple" to maintain reign over the student body. We could have used some more interaction with Ted to give us a little more depth to his wanting to be with Samantha after watching his girl self destruct at his latest soiree. Still, he takes on Ted as a friend and even allows him a shot at his girl. He also comes to save Samantha from one of the most bizarre weddings complete with remembrance of her titular cake candle count. Bravo, Jake. Bravo! You are a stud. Yeah, Dat You!
Nerds

In terms of nerds Duckie isn't so much a nerd as he is just a hopeless sidekick.He pines for Molly Ringwald and has little to offer her in the same way that Andrew McCarthy can. His manner of dress and his choice of hair styles leaves little room for studliness. But, in our own way we all love Duckie and probably at one time was The Duck Man.
Bitches
16: Kathryn Merteuil (Sarah Michelle Gellar) from Cruel Intentions 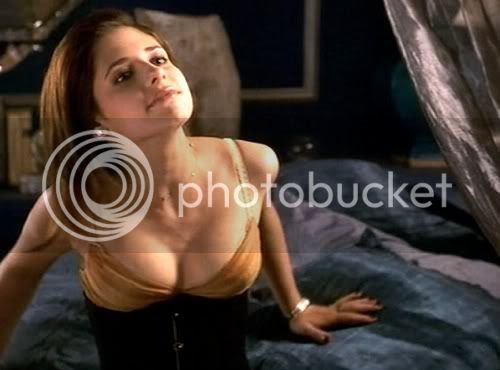 She plots to ruin a young and innocent Annette Hargrove (Reese Witherspoon.) She uses sex as a weapon to get Sebastian Valmont (Ryan Phillipe) to do her dirty work. She helps Cecile Caldwell (Selma Blair) learn how to French Kiss! If it weren't for all the scandalous gossip and back stabbing, Kathryn might have made it onto our list as a babe. But the teen adaptation of Les Liaisons Dangereuses gives Sarah Michelle Gellar a chance to take her Emmy winning turn as the daughter of Erica Kane to a whole new level of bitchiness.
Bad Asses
15: John Bender (Judd Nelson) from The Breakfast Club 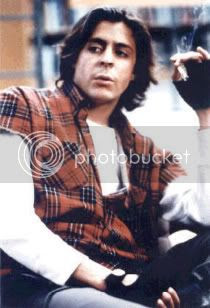 As the resident thug and low life, John Bender poses little more threat than a bad case of the flu. But, when you think you've got him figured out he either shows you a little more heart or sinks to a new level of depravity brought on by cigarette burns and bad family Christmas experiences. The fact that he offers to take the fall for the rest of his "Breakfast Club" by staging an impromptu basketball game to distract Vernon from the jail break shows a little of his soft side. When he pulls a switchblade on Andrew and gives you his rendition of a night at the Bender's, you know he's for real. To think the bad boy can end up with the "princess" is seen as more of a benefit to privileged Claire than it is to improve his image. Bender must keep his tough guy persona among his friends and if there were to be a sequel to The Breakfast Club, where Bender and Claire end up together, you can only imagine the changes she would have made to his everyday life. The kind of changes that would drive you crazy.
Bullies
14 Biff Tannen (Thomas F. Wilson) from Back To the Future 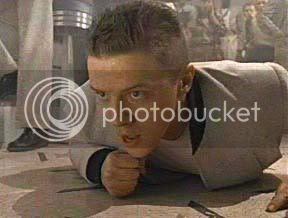 Biff captures all the necessary qualities needed for the number two bully . He's big, ugly, and dumb. He's also committed to his craft. On day one of Calvin Klein's stay at Hill Valley High in 1955, Biff nearly comes to blows with the alter ego of Marty McFly. When he's not giving junior a hard time, he's dishing out enough for Marty's future father, George. Oddly enough, the climax, which involves George McFly standing up to Biff, securing Marty's existence doesn't leave Biff a shattered and destitute man. In the beginning we see Biff in a horrible suit, having to borrow George's truck for whatever reason. While George and his family's status slides to the other end of the economic class, Biff seems to be sporting a better wardrobe while waxing the McFly's car. As it plays out in the sequel, he even owns his own detailing business. Not bad for a bully.
Freaks and Geeks
13: Napolean Dynamite (Jon Heder) from, duh, Napolean Dynamite...gosh are you stupid? 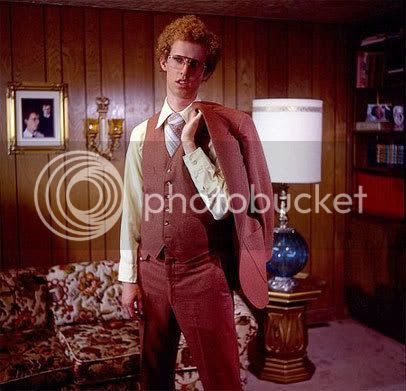 As far as the socially inept are concerned, Napolean is their king riding atop a Liger, displaying kick ass illegal ninja moves banned by the government. While, technically in the nerd family, Napolean's freakish looks derived from his use of Moon Boots and Afro hairstyle are only complimented by his geekish ways of dangling action figures from bus windows and proclaiming victory in tether ball. Still, his awesome Jamiroquai dance moves keeps him separate placed into this category and not in full nerd mode.
Dead and Undead
12: Neil Perry (Robert Sean Leonard) from Dead Poets' Society 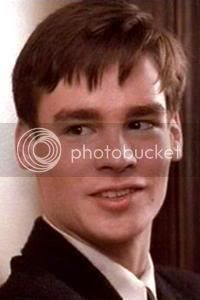 Although Neil is alive for pretty much the entire film, his death resonates all the way back to the opening as Keating has Neil read the introduction to their textbook, Understanding Poetry. Neil is a tragic character in that he would rather be dead than submit to the unrealistic expectations of a his military mentality father. It's an ironic twist that Neil plays Robin Goodfellow, a mischievous faerie, which is in direct contrast to his organized and serious father. At the end, the students, now being taught by the headmaster after Keating's termination, are forced to read that same paragraph that Neil read in the beginning. The feelings of remorse over the death of their friend and Keating's leaving springs the students into action. Standing upon their desks, they cry out "O, Captain! My Captain." While the life lessons were learned by all the class, Neil embodies the greatest lesson of Keating, Carpe diem. Thank you, Neil. Thank you.
Slackers
11: Ferris Beuller (Matthew Broderick) from Ferris Beuller's Day Off

For those of you ready to topple your computer upside down and go Wild Bunch on me for not placing Mr. Beuller anywhere in the top 10, remember this. Each category has five total students. Ferris is simply the number two Slacker of all time, not the the 11th. That being said, Ferris pulls of one of the all time greatest, if not implausible, feats of ditchery. He reduces his sick days from nine, gets his girlfriend out of class with the ole dead grandmother routine, cons his best friend into letting him borrow his Dad's Ferrari, gets seated in a posh restaurant posing as the sausage King of Chicago, catches a foul ball at a Cubs' game, lip syncs Wayne Newton and the Beatles in a parade, all while dodging the principal. Not a bad days work for the number two slacker.