A Matter of National Security?

The best kept secret in America was out in the open for a while. Can you guess what it is?

It is the cornerstone of an entire organization’s existence. To reveal it would destroy the organization. It’s the kind of information people would kill for. Those that are keeping the secret from the public have faced scrutiny about their practices. They have been protested in the past. Is it the truth about The Da Vinci Code? Nope. That’s going back a bit far.

No, this best kept secret is only 68 years old and for the past 20 has been kept safe at the organization’s headquarters with two combination locks, behind three locked doors inside a vault. Only two people know the secret at any given time and no one knows their names or rank. When the need for tighter security arose, the secret was relocated temporarily. It was whisked away in an armored car under guard. Evidence linked to the secret can be seen from space by satellite. The conspiracy thickens. Is it the alien at Roswell? Nope, but you’re getting closer.

All of this silliness is merely to protect the original recipe for the 11 herbs and spices found in Kentucky Fried Chicken. The measures taken to keep the secret recipe secure mirrors a political thriller. Multiple suppliers are used to blend ingredients yet only have a portion of the recipe. One can only imagine Jason Bourne or Ethan Hunt trying to penetrate security to steal the piece of yellow notebook paper stuffed in a filing cabinet. While Jason Bourne may smash his way in, overpowering the guards, Ethan sneaks in disguised as Colonel Sanders then takes to the ventilation shaft and dangles over the filing cabinet trying to crack the combination locks. The reality is much more boring. The recipe was slid into a briefcase and handcuffed to a security expert with the instructions, “Keep it safe.” Soon it will be back in its little filing cabinet at KFC headquarters along with samples of the herbs and spices in vials.

Next time you enjoy a bucket of original or extra crispy remember that a lot time in effort went into making sure you get the Colonel’s brand, even though he’s been dead for close to 30 years. It was everything he stood for. Not bad for a guy who pretty much failed at everything he ever attempted and at one point had even resorted to possibly kidnapping when all else failed. He did not go through with it. In that he successfully failed. Instead he went on to open his franchise and died of leukemia in 1980. Oh, and for those of you wondering how KFC is close to the Roswell incident, check this out. One of the most well known firsts in food related trivia is that Wrigley’s was the first item to include a bar code. Well, in 2006, KFC became the first corporate brand name visible from space.

The coordinates for the image are Latitude & Longitude: 37.646069, -115.750710
If you can believe it, the Earth just became a billboard. How long before there are little signs in space telling aliens which exit to take in terms of gas, food, lodging. Just so you know, Saturn has already got a Starbucks on Titan. They got great Macchiatos. 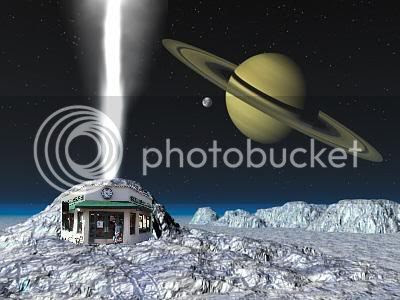