Black Friday, Cyber Monday, and Every Other Day Between Now and Christmas

Whether you are a die hard bargain hunter standing in line during the wee small hours of the morning of Black Friday or a cubicle warrior taking advantage of the empty office and lack of supervision on Cyber Monday, you probably feel the same amount of stress, regardless of your location.

Imagine shrugging off the effects of late night, leftover tryptophan ingestion just so you can stand in the freezing cold with other lunatics in sleeping bags and tents waiting for the doors to open so you can make a mad dash for that DVD/VCR combo unit made in China. You sprint towards your quarry like a linebacker, mowing over anybody who gets in your way all to save $20. On the other hand, you could be digesting those leftovers all the way through to Monday, where you arm yourself with a tankard of Starbucks digging through countless retail websites looking to see if you are really saving any money only to make up the difference in shipping costs and aggravation at continually slow connectivity that sends your IT workforce into panic mode.

Personally, I’ve done both and could do without either. In 2000, I made a trip out on Black Friday and found myself a stress free go of the adventure. Granted, I had to work that morning and didn’t get out to the store until well after 11:00 AM, which, in contrast to deer hunting is when all the big bucks show up. I went out again this past Black Friday for one item, Vanilla Beans for my mother. Again, I had to an earlier appointment and didn’t make it to the store until the sales had ended. It’s amazing to watch people suddenly drop everything and run to the checkout when the clock strikes “SALE OVER!” I also decided to check out Cyber Monday from the comfort of my living room and bought two items online that were discounted by 50%. In this case, according to customer service the website could not process my order due to a “glitch” which kicked out a lot of online purchases. The order did not process until Wednesday and the website shows those two items for the same price as they were on Monday.

Shopping on these two pseudo holidays has become a tradition. The term Black Friday, itself, has many recognized definitions since its inception. The more widely accepted one being the day retailers start to see black on the financial records. In fact, a lot of stores depend on this day to counter balance the year’s losses. Cyber Monday has only been around since 2005, but people revere it as a day when those few unfortunate souls have to go back to work yet shrug off productivity to shop online. Whether it be the struggling economy or a slew of other factors, this year the concept of Black Friday and Cyber Monday seem to either be nonexistent or extend past their respective weekdays.

For me, the stress and agitation of the holiday season only started creeping in the last eight years. It was like once I hit 25, it all went downhill. Social anxiety, road rage, and general laziness all kicked in at once and I didn’t want to be bothered with crowds and slow Internet connections. Not to mention, it's not safe. This year will be forever remembered as the year a Wal-Mart employee was trampled to death by the mob of bargain shoppers. This is perhaps the greatest shopping related act of senseless violence since the Cabbage Patch Fights of 1983. It's even sparked a proposed "Doorbuster Bill." Sounds like Bob the Builder's more aggressive cousin. In my sick and twisted mind, I wanted to start humming old School House Rock ditties, changing all the words to make it a relevant parody of this year's tragedy. I opted not to.

In all seriousness, no sale is worth risking your life or sanity over. I would rather pay 20% more at the store in December than lose my mind and a couple of teeth, fighting with the crazies on Black Friday. Quite frankly, the savings aren't all that great. After all, some stores are using the recession to take advantage of people. Some have touted big savings but they aren’t any different than any other day. Others have used Black Friday like coastal beachwear stores use “Going out of business” and “Store Closing” as a tactic to drive sales. If you’ve ever gone to Myrtle Beach or other coastal tourist locations you see these beachwear stores like WINGS and others, all claiming to be going out of business. These stores have been going out of business for years. Because most vacationers stay at a spot a week at a time the turnover rate for new suckers is every seven days. The prices on items in these stores are no big savings. They’re slightly marked up enough to make a profit and the threat of going out of business deceives shoppers into thinking the prices were higher before. If you don’t believe me, ask someone who lives in those areas full time.

No, I’ll take the 25 plus days of shopping between Thanksgiving and Christmas to get my shopping done. Why stress yourself out. It’s supposed to be a fun holiday, right? I can remember as a kid that the holiday shopping season was rather exciting. My Dad would be at Lions Club meetings on Monday nights, so my Mom would do her shopping then. Since she didn’t want to cook a big meal for the two of us, she decided that we would eat at the mall. Monday’s were a rather slow day anyways, so it wasn’t too stressful. By the time, I was in my teens, we would decide to split up at the mall and I could loiter or hang out in the arcade or do whatever until time to meet up to go home. It was awesome. For four straight Monday’s I had free reign at the mall. And it wasn’t like we went to the same mall. No, there were different stores that she needed to go to and you couldn’t find them all in the same place. We used to go to three different malls in a 40 mile radius which meant three different arcades, video game stores, and food courts. It also meant an overload on Christmas decorations. The music and the decorations made the season bright, you know? Who doesn’t remember the animatronic displays in the middle of the halls and the poor bastard that had to sit inside that cleverly disguised gift box booth with a giant reindeer spilling over top, complete with blinking eyes and movable maw. As kids would wander by, Rudolph, the sadistic hourly employee would scare the piss out of their Garanimals, springing to life and asking them if they’ve been good this year.

Well, at least one trend from my childhood has made a comeback in this slumping economy and that’s layaway. There were three small market chain stores in my area that highly utilized layaway and all three fell victim to the evil empire known as Wal-Mordor. Montgomery Wards (a.k.a. Monkey Wards), Ames, and Hills. Well, actually Hills was acquired by Ames, which later fell to Wal-Mart. It’s like the subprime mortgage crisis for a different generation. Personally, I only used layaway once to buy something that I needed to hold somewhere else while I moved. It was a curio cabinet for my wife and I was in the process of moving and didn’t want to have another box to potentially destroy, so I put it on layaway and paid it off after I was settled into my new place. Wards, Ames, and Hills, were the big three local department stores for the blue collar folks of Western Pennsylvania and layaway was the method in which to avoid high prices upfront and credit card finance charges. You put a down payment on your item, and systematically pay it off over time. All the while, your item is held at the store or warehouse freeing your home from prying eyes that belong to kids snooping for presents. Hills was especially a great store because that’s where you got all the toys as a kid. I remember seeing a Nintendo for the first time, immediately to the left of the entrance, in the electronic section. I wished and I prayed that I could get one for Christmas but that never happened. Instead, I bought a friend’s system for $100 with three games and a big strategy book.

If you didn’t go to the store, your options for shopping were pretty limited prior to 1995. Granted, we had our own version of shopping online as a kid. It was called catalog shopping. My favorite was the Sears catalog or “Wishbook.” I read those catalogs like they were crime novels, riveted by every page. The one thing I always wanted, but never got, was a train set. Now, this was not some regular old train set from TYCO or Lionel. It was a huge, honking thing that you rode with tracks laid throughout your home. I blame Silver Spoons for causing me to salivate, over this thing, every year of my childhood. I would dog ear the pages of the catalog in an attempt to draw my parents’ attention to that one item much like Ralphie Parker placed a Red Ryder BB Gun ad inside the pages of his Mother’s Look magazine. 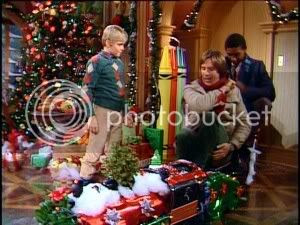 The train from Silver Spoons 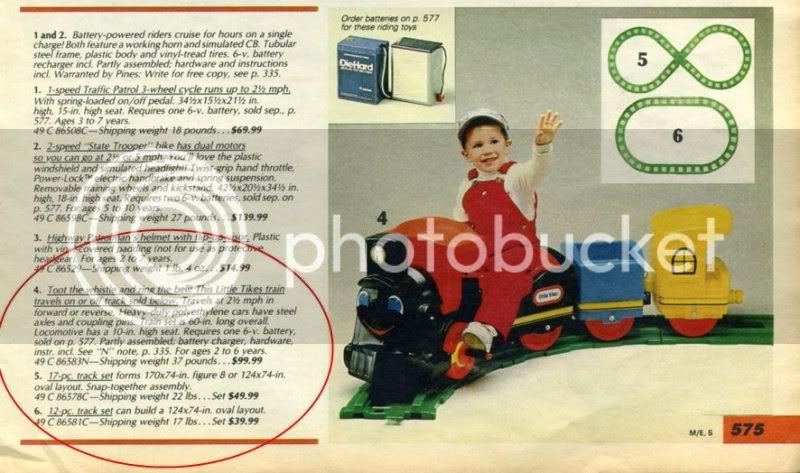 The one Christmas Present that got away

But those days are gone. While layaway has made a comeback, the fun and pure joy of leafing through a catalog is gone. Perhaps growing up stole my passion for it. Perhaps the magical allure of Christmas shopping has been replaced the harsh reality of having to actually budget and finance, not to mention having the tag of “Some Assembly Required” mean “I must assemble” vs. “Dad, put this together.” I wish Christmas shopping was still that fun. I wish that I didn’t have to fight the crowds and nitpick over ridiculous pricing ploys that I know are too good to be true. I wish I could go back and be a kid again and believe that Santa brought me my toys and not my parents who had to figure out new and inventive ways to pay for and hide the presents. Well, for that matter, my Dad never had that problem. You see, my old man didn’t believe in Black Friday, Cyber Monday, or any other day between now and Christmas. He did his shopping all in one night, Christmas Eve, much like Santa Claus. Of course, this holiday is traditionally called Piss On LEGO by my family, but that, is another story.

Need some more nostalgia? Check out a bunch of old Christmas Catalogs, including the Sears ones I referenced. Brought to you by Flickr