There are times when I am so utterly brilliant that I am an idiot. When it comes to technology, whether it be a computer or other electronic device I can usually figure it out in five minutes. There's no need for instructions or how-to's. If it has an on button and some sort of display I can usually hold my own on getting it to work. Now, I should preface that statement with this one. If it's a software related issue, I have a 50/50 shot at resolving it. I am better at the hardware problems than I am at the software ones. Consider it science vs. faith. More often than not, people come up to me at work, not to ask me for my help in my actual job capacity, but to help in something either related to their computer or other electronic devices. It's one of my four marketable skills that no employer ever takes advantage of, along with the ability to do a killer impression of Sam Waterston. I'm sure there's a market out there for it, but I haven't found it yet. The level of my technological aptitude would probably make me well suited to work at an Apple Store as a genius, as long as it involves working with iPods and not Macs.

On the other side of that coin, the frosted side of my aptitude mini-wheat is the ability to be so profoundly idiotic that I should come with a plastic bag warning. Just today, while coming into work, I walked into our break room to drop my lunch off in the refrigerator and make myself a cup of coffee. While that seems a mundane and rather simple task, I managed to place my lunch by the coffee pots and attempted to put my coffee mug in the fridge. Once I realized my error, I quickly looked around to see if anyone had noticed.

Perhaps I need more sleep and less caffeine to function. It's like working in idiot safe mode. You sacrifice functionality in order to operate higher functions in order to discern what causes things to go wrong. For whatever the reason, this week offered a typical situation addressing both my utter genius and downright stupidity.

One of our facilities services technicians, which is PC for office handy man, asked me for help in a couple of items. He's a good guy and I've helped him on occasion in the past. The problem vexing him today was that one of the televisions in the lobby was getting no signal from the dish network. Again, it has a button and a display, so definitely it is in my realm of understanding. Anyway, I agree to take a look and fiddle with the thing for five minutes. While most televisions have remotes nowadays, there are still functional settings on the television itself to handle power, channel and volume selection, and usually some kind of menu. Since he only had the remote to the dish receiver handy, I had to try and figure out the problem with only four buttons on the side of the TV at my disposal. While, I was able to access the menu settings and locate a possible fix, I couldn't select any choices in that menu selection because I didn't know which of the four buttons functioned as a "select" or "enter." After having him track down the actual television remote, within two minutes I solved the problem.

After that, he asked me for assistance in hanging a picture in one of the conference rooms. We had some painting done over the weekend and he needed to re hang all the abstract works of art that really don't say anything in particular. They probably come in a catalog for all office decor items. Now, the picture was a simple item, somewhat flatter than the television I had just figured out, but nonetheless it was a solid object. Two hooks on the wall at the top with one at the bottom, containing some sort of safety latch, gave us our guide as to how to hang the thing. After ten minutes we still hadn't got the damn thing up. Let's see, do we hang it by the top first or the bottom? Does it hang on the inside of the frame or this little track that runs along the frame? Are the hooks in the right spot? Well, they have to be, because they were there before the wall was painted. Round and round we went trying to figure out not what was in the painting, but how to get it on the wall.

Finally, we gave up. I had to actually get back to my desk and do my actual job and he had other jobs to attend to that required more urgency than wasting a half hour hanging a silly picture. So, you see, sometimes even the most intelligent of people can be stupid. There has to be some kind of movie reference here that would be a good analogy. Something that sums up the ability for someone so heavily favored to triumph by skill and technique alone, that nothing could defeat them, but it looks like my coffee cup is nearly empty which means my brain will cease to function in a few minutes. What little time I have left has afforded me to the ability to sum up this entire blog post in one picture. 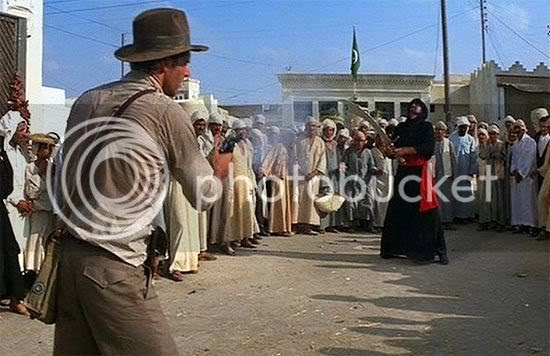