Ok, perhaps you’ve been wondering what the hell this post is all about? Perhaps not. Some might have come here thinking they’ve stumbled onto a fan page for Mega Bloks intending to diss LEGO. 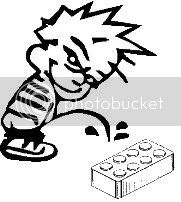 Nope, this is just me turning over the blogging reins to the man who begat Mongo in order to share a Christmas tale of woe from the perspective of a Father who shops on Christmas Eve, or as the holiday is officially known in my family as Piss On LEGO day. I could try to give you an explanation but it just wouldn’t be as good. I think I’ve mentioned on more than one occasion that I love a good story. In fact, I’ve used that same line in both The Coffin Story and The Baseball Story. What can I say, I come from a long line of storytellers. You see, my Father has the ability to spin and weave a beautiful tapestry of details and facts with enough gravitas to make Morgan Freeman wish he could narrate it. Then, he yanks the rug out from under you with a punch line that you never see coming. The man is that good. So, for me to try and recreate the story of Piss On LEGO would be like having Britney Spears recite Shakespeare. I wouldn’t let here read Dr. Seuss. Now, occasionally, I may bust in with a footnote or some exposition to highlight the details but in order to not detract from the flow, I will add a note and the bottom of the page will reference those. Now, without further ado, I give you the origin of Piss On LEGO.

Once upon a time in a galaxy far, far away1, two brothers would go Christmas Shopping. Only one of the brothers had children at the time, and the other brother would go along for moral support, and to drink beer at Bud's2 later.

It was a very difficult task for the older brother to purchase gifts of a quality suitable for the wonderful, highly intelligent, and generally superior children that he had begat.3 It came to pass that on a cold and snowy evening late in December the two Brothers odyssey came to a crucial impasse at the Ames store at the Uniontown Fayette Plaza4. Having not yet found the suitable gifts that his children deserved, the dejected Father walked up and down the aisles searching for his elusive quarry.5

In utter and abject futility, the hapless Father cried out, " I just don't know what to get those kids for Christmas" The younger brother, ever helpful said "Why not get them LEGO"? The older Brother, without thinking, and not realizing that he would be coining a phrase that would live through the ages, said "Aw, Piss on LEGO" and from that moment on, every Christmas shopping trip became a mission to Piss On LEGO.6

1. Ok, I realize that it didn’t take long for me to have ruined the flow, but I had to jump in here and point out that Dad is partially the reason I’m so warped. After all, when you can recite the Dead Parrot Sketch before you learn the pledge of allegiance you’re doomed for life. In any case, opening with Star Wars just goes to show where I get it.

2. Bud’s is a local pizza and beer joint in my hometown. If you are very familiar with the Pittsburgh area, you’ll know what a Vinnie Pie is. Bud’s is the equivalent, save for the cigarette ash. Either way, you could take the empty box home and lube up a Ferrari with it.

3. That’s a pretty bold statement. Between my brother, my sister, and myself, I’d say we were more enthralled with the boxes toys came in then the actual toy. In fact, pretty much every toy we got, that had internal parts, was disassembled by my brother and rebuilt with more power. Of course, I ended up breaking them soon afterwards.

4. Now, for the sake of authenticity, it is very possible that my Dad meant Hills. I could be wrong. I’m a little fuzzy on the geography of the Uniontown Fayette Plaza circa 1979-1984. I was only aware of Hills being the major store there at such a young age.

5. Well, it was Christmas Eve. What would one expect? We’re lucky we didn’t end up with the Alex P. Keaton Christmas Gift Extravaganza consisting of Beef Jerky and a TV Guide from 7-Eleven.

6. I can’t make this stuff up. This is really what he calls Christmas shopping. I don’t know if he still waits until Christmas Eve to do it, but for the longest time this was the running gag.