Kids today. They think they're so clever. They don't know the power of the old school pop culture humorist. For those of you not familiar with Internet phenomenons or image macros or message boards and forums like 4chan and Something Awful let me explain. No there is too much. Let me sum up, O RLY was a message board type of smart ass response using a photograph of a snowy owl with the Internet abbreviation of "Oh, really?" photoshopped over top of the image. It showed up on the Something Awful forums on or before August of 2003 and has been parodied and mimicked in everything from World of Warcraft to Lovecraft's Cthulhu.

Original O RLY Image
While I haven't done an extensive search of the Internet to see if this has been done before, I'm pretty sure it hasn't been widely indexed, hence the lack of evidence. Regardless, these Internet geeks that claim to be 1337 managed to miss the most obvious of O RLY uses. There is a scene in Meatballs.....classic.....where Bill Murray is playing cards with Chris Makepeace for peanuts. They are drinking what appears to be club soda when Bill's character, Tripper, speaks while belching. He says the words, "Oh really, really?" So, I thought that the screen cap of that moment would make a perfect O RLY image macro. 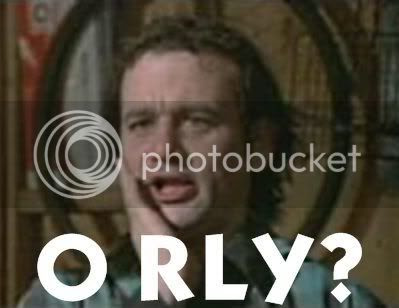