Monkey Fighting Snakes on a Monday To Friday Plane

This post has been modified from its original version.

I don’t know about you but watching a movie for the first time on its television broadcast seems sacrilegious. First of all, unless you are watching it in HD, it is probably going be cropped into full screen format. I am one of those die hard wide screen enthusiasts that cannot stand to watch movies unless they are presented in their original format. The fact that George Lucas went back and monkeyed around with the Original Star Wars Trilogy in the mid 90’s did not bother me. Some of the additions were pretty cool. However, I did take offense at the whole Han/Greedo showdown. I do not care how immoral it may appear, but Han Shot First. End of story.

Tirades aside, occasionally, I will catch a movie on basic cable which subjects me to cropped vistas and edited language. Now, depending on what channel the movie is playing, the censoring of profanity can be as simple as just muting the offending word leaving you to read a person’s lips to inserting a new word or words to try and keep the integrity of the scene’s sound intact. The results range from laughable to downright hysterical. Of course, the most common replacement for the ‘F’ word is “Forget” as in “Forget You.” However, once you start getting into the variations on the word, you run into trouble.

I have decided to point out a few great examples with clips from YouTube to illustrate the hilarity. The most recent rearing of ridiculous re-edits just happened when Snakes On A Plane was aired on FX. Putting this movie on regular television is like 80’s Teen Sex Comedies on USA Up All Night. The whole purpose of watching those films is the blatant nudity and the editing for content on those is just as bad as language. My personal favorite is an already bad movie, Showgirls. Why would you watch that movie in the first place is beyond me? Why you would watch it with the flesh colored underwear digitally added in is just plain masochistic. However, I digress. Here are some of my favorite bad dubs and edit fails.

1. Snakes on a Plane: "Monkey Fighting Snakes on a Monday to Friday Plane!"  We all know that the whole point of this film was to hear Samuel L. Jackson utter the famous line. When you watch it on television you get a whole different context. Apparently, this airline only has flights during the week and as part of the in flight entertainment you are treated to monkeys fighting snakes. 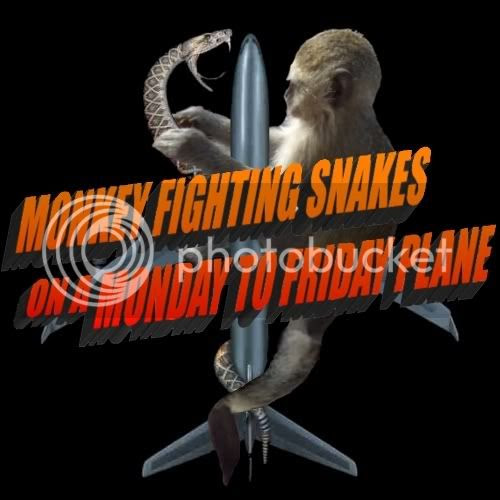 Monkey Fighting Snakes on a Monday to Friday Plane
(Warning: This design has been modified to comply with CafePress' Content Usage Policy.)

2. The Rock: "Winners date the prom queen!"  When movies attempt to make a passable edit to keep the context of the dialogue, you would think that they would go through every possible word to make sure it matches the tone. Then whoever is doing the dubbing should try and sound like the original actor, that is if you can’t get them to do the dub. Well, who the hell doesn’t do an impression of Sean Connery. His voice is one of the most highly impersonated in pop culture, yet the person dubbing over this line makes it sound like Sean is stroking out when delivering this line.

3. Major League: "Strike this guy out!"  One of my all time favorite movies has one of the all time funniest edit fails. Corbin Bernsen approaches Charlie Sheen on the mound and in what looks to be a showdown over Sheen defiling Bernsen’s wife in retaliation for his on the road infidelities becomes one of the worst dubs ever. They attempted to stretch a single syllable word over the spoken length of two syllable and on top of that, Bernsen suffers from Connery’s stroking out syndrome.

4. Die Hard With a Vengeance and Repo Man: Jackson strikes again with this epithet for someone who beds a mother. Somehow, Die Hard got lucky and it actually sounds pretty funny owing the term to Repo Man’s director Alex Cox, or should that be Alex Game Bird?


Now, some movies just have original tracks that are hysterical. One of the greatest intentional censored words comes from Michael Keaton’s Johnny Dangerously. Roman Moronie’s malapropisms shown in calling people "fargin ice holes" and "bastadges" have become part of the Pop Culture lexicon.

For a list of other bad edits check out Uncylcopedia.
Gawker has a compilation of bad edits but they neglect Major League or The Rock.
Posted by Mongo at 4/25/2009 12:57:00 AM