Vanity plates are the ultimate sign of driver individuality. Yes, bumper stickers can capture an idea and display it for the world to see on a 10x3 piece of paper but vanity plates are registered with the proper authorities. Sometimes, even the most innocent of letter combinations are deemed offensive by the DMV.

Apparently, the Colorado DMV has a thing against vegans. A 38 year old mother wanted to show off her love of TOFU by registering the vanity plate, ILVTOFU. Unfortunately, the DMV considers the letters F and U together to be bad form. In other words, the plate looks like it reads I love to F&$# U or FU as an abbreviation for sex. In her defense, she says her whole family LVTOFO. So, we're either dealing with sick bastards or people who people who like sex. Yes, go ahead and read that sentence again, I'll wait. I'm of course being sarcastic. I understand the idea that people may be against eating meat.

That is, if they aren't being vegan to be trendy. If you don't like meat for the taste, that's fine. If you don't like meat because of the treatment of animals, that's fine, too. But if you don't eat meat because meat is murder or because you won't eat anything with a face, then I say, get over yourself. I don't know how many times I've had someone say to me, "Meat is murder," and then they stomp their leather shoed foot to emphasize their disgust at me with a Whopper hanging out of my mouth. Does not a potato have eyes? Does not a corn have ears? Just because vegetables don't have a mouth doesn't mean a carrot doesn't scream when you yank it by the hair from the ground and peel its skin from its body. Then you drown it in dip and eat it piece by piece. Oh, the horror.

Look, I am a meat eater. My father grew up on a farm and he raises cattle, still. Every so often, he goes out and says...."Mmmmmm that one!" Now, while I love beef, I will not do that, myself. I don't go to the Red Lobster and say, "Take off the rubber bands, I'm going in." I go to the store, where the beef is already processed, or to a fast food restaurant, where the food is possibly devoid of meat, all together. In any case, I don't do the killing, I just do the grilling. I don't get caught up on the politics of chicken rights, I just love me some wings in sauce. Could that chicken have been kept with five other chickens in one cage under horrible conditions? It's possible. But I didn't kill it and I didn't ask anyone to. I just went to the store and picked up the package. If I didn't, someone else will.

Now, I love animals, especially on bread.....kidding. I have four cats and every time I have Chinese food they look at me a little weird. Seriously, though, I could never personally harm an animal. I have rescued countless dogs and cats and got them new homes or returned them to their owners. To know that in some places, animals being raised for food are kept in horrible conditions and suffer greatly for the almighty dollar is despicable. But once it's at the store, the story is over. Just because I boycott a place of business like KFC or wherever, doesn't mean they'll go out of business. It just means I won't eat their chicken. You can't stop evil corporations at the end of the product life cycle. If you want to nail them for bad behavior, nail them at the top before the chicken does the one legged shuffle off to Buffalo.

And me, I will continue my fight against the all oppressive Department of Motor Vehicles by selling out and capitalizing on someone's 15 minutes, by making a shirt and selling it. That's right. This isn't a rant, it's a marketing opportunity. Now you can get the banned plate on a shirt or a bumper sticker. Here's the Colorado version. 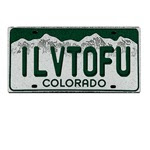 And soon, they'll be more, like my home state of Pa. 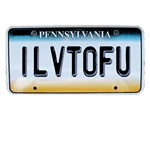