One in Ten Addicted To Video Games, Nine Others Just Suck.

I love video games. Have I said this before? I mean I love playing video games. I love driving a kick ass car through cities towards a finish line. I love blasting away zombies and various residents of Liberty City. I love figuring out little puzzles and sliding down pipes into dark worlds looking for coins. But am I addicted to video games? No. Do I play video games more than I should? What’s the standard?

There was a report done by Forbes magazine on how there is a rampant addiction to video games among teenagers. It’s nice to Forbes is stay on top of things. Actually, the study was done by Iowa State University so they are to blame for this. Forbes just waited around to report on it. since video games have been around since the before the 70’s. The point is, whether they are upright and accept coins or sitting in your living room and have a little controller attached, video games are everywhere. They are accessible by young and old and have been for years. They are as prevalent into today’s society as the multiple television home and the nine year old with a cell phone. Now, if you want to talk about addictions, let’s talk about cell phones. I think people abuse texting far more so than video games.

OK, that statement might be a little unfair. Before the proliferation of cell phones among the adolescents of the world in a time, long, long, ago, known as the 80’s. Kids spent copious amounts of time on the telephone chit chatting away with their friends. They’d tie up phone lines for hours causing parents to install a second line for their hooked in teenagers. There is not much difference between the teen spending hours on a phone with the ratty old curled up 16’ cord and the teen running up huge bills over texting and talking on cell phones.

But back to video games. Is there such a thing as video game addiction? Here’s an excerpt from the Forbes article…

“Experts don't agree on whether such a thing as "video game addiction" really exists. At present, it is not listed as a mental disorder in the American Psychiatric Association's Diagnostic and Statistical Manual of Mental Disorders. The next update of that manual, which describes criteria for diagnosing various psychiatric disorders, is due out in 2012.”

So, in order to be recognized as a disorder, we have to wait another 3 years? Why don’t they just put a little hourglass at the bottom of the report and have it spin around like the loading screen for a video game? OK, let’s get something straight. While there may not be a disorder called “Video Game Addiction”, there can be an addiction to video games. Just like addictions to other behaviors, video games represent an escapist resource. Bad day at work, run over pedestrians in Grand Theft Auto. What we fail to realize is that it is not the fault of the video game for the addiction. When is the last time we actually blamed alcohol or cigarettes for the addiction? I’m not talking about the companies that manufacture, market, and distribute cigarettes and alcohol. They are partially to blame for enticing people to engage in addictive behaviors However, an inanimate object is not responsible for someone’s inability to show some restraint and enjoy that behavior in moderation. I’m not saying that all behaviors are something you should enjoy, I’m just saying you have free will.

Taking a look at the report done by Iowa State there is a HUGE mistake right in the Abstract.

The current study includes a self-report measure of video game habits completed by 607 8th and 9th graders for hand-held devices, video game consoles, and the computer. A scale of addiction was identified and separated into two groups (Non-Addicted and Addicted). The Addicted group revealed more reports of involvement in physical fights in the last year, more arguments with friends and teachers, higher hostile attribution scores, and lower grades. These results suggest that video game “addiction” is a problem among adolescents, particularly among males, and that addiction is associated with adjustment problems such as school performance and aggressive attitudes and behaviors.

Let’s take video games out of that equation and test those students again, shall we? Let’s test these students based on the behaviors they display and then ask them how much time they spend playing video games. What is going on here is that video games are being blamed for kids with pre-existing behavioral problems. The fact that they play video games is a symptom of the problem, not the cause. If video games were not around, the same results would have been attributed to television, or music, or movies, or comic books. In every generation since the end of World War II, sociologists and psychologists are looking to blame some external factor for bad behavior instead of blaming where the behavior stems from, poor child rearing.

This article comes at an ironic time since April 20, 2009 marks the 10 year anniversary of the Columbine Massacre. Somehow, using the word anniversary to denote one of the top five tragedies to ever occur inside the United States is somewhat morbid. I would not even go near the word commemorate. How about observance? That sounds more appropriate. Anyway, 10 years ago, two students, Dylan Klebold and Eric Harris, walked into Columbine High School dressed in trench coats and carrying semi-automatic weapons and homemade bombs, much like a scene from The Matrix. They unleashed a hellacious amount of violence on the students and faculty before killing themselves. From then on, the aftermath of psychoanalysis over bullying, media, and social subcultures look for some rationale behind the cause for these two students to enact such a tirade played out on the television and the courts.

Psychiatrists and investigators concluded from journals that Harris was a psychopath and Klebold was depressive, easily swayed and manipulated by Harris into joining his delusions of superiority over their oppressors. These reports have been listed as inconclusive. Were they a part of some Trench Coat Mafia? Did prescription drugs for pre-existing disorders cause Harris’ actions? Was their addiction to gaming responsible for the desensitization moral behavior and the importance of the life of individuals?

I am neither a psychologist or an expert in any field needed to analyze this type of behavior. What I can tell you is that video games are not to blame for their behavior. Violent music or movies are not to blame for their behavior. These things are merely ways for them to indulge and explore an already established predilection of violent or anti-social behavior. Fuel for the fire. For anyone else they merely exist as a recreational outlet. A person can engage in playing violent video games, listening to music with violent undertones, and watch ultra violent movies without any repercussions. Just like a person who is not an alcoholic can go on a night of extensive drinking and then function normally without needing or wanting to drink for any amount of time afterwards. How is this possible? I am one of those people. I love playing games like Doom or Grand Theft Auto. I own or have listened to the same music that other people have claimed as the reason for violent behavior. I've seen "The Exorcist" about 167 times, and it keeps getting funnier every single time I see it! You get the point.

Now, to say that this type of stimuli, exposed to the mind of a developing adolescent, can lead to violent behavior is not too far from a true statement. Again, the development of adolescents is something that can be influenced directly based upon the amount of exposure and chemical makeup. The same goes for the ability for some people to burn and some people to tan when exposed to sunlight. Some people just have better skin, just like some people have thicker skin. I was bullied in some ways, growing up? Did I ever want to grab an AK-47 and kill them, metaphorically, perhaps, but it’s nothing I would have ever acted upon in reality. Why? Because my parents gave me a proper upbringing and allowed me to learn what is right and what is wrong based on experiencing both first hand in moderation. By reinforcing that I am totally capable of free will and making bad decisions, those decisions have consequences that directly affect the amount of money I see in an allowance or the tenderness of my ass cheeks at the hands of a wooden spoon.

I’ll give you a better example. My wife is a piano teacher. She has a student that fits into your stereotypical designation of a nerd. He’s lanky, has curly hair, wears glasses, and is a bit awkward, socially. He’s the teenage version of Eddie Deezen. Now, he’s getting no help from his parents. He’s been sheltered and coddled by his parents to an extreme amount. His mother sits just a few feet away from him during his lesson. She asks out loud in front of other people if he needs help with his belt when he’s been in the bathroom for a few seconds more than normal. She walks him hand in hand to their car and has him sit in the back seat while it’s parked in our driveway off the street. The kid is just about ready to start high school and he’s going to be the social equivalent to chum in the shark infested waters of high school bullies. This kid could very well snap out, grab a gun, and climb a clock tower. There’s no moderation in either his exposure to everyday concepts such as success and failure or shielding from harmful stimuli. It’s feast or famine. You either get Karen Carpenter or that guy on Inside Edition being led down the street to his wedding on a parade float that looks like a bed.

Before I go on towards infinity like a game of Tetris, which even that concept has been debated to infinity, I’ll wrap this up. In fact, I’m going to pull a head fake on you. This whole diatribe, while enormously dear to my heart, is in fact a setup for a new design for my CafePress store. So, here you have it. 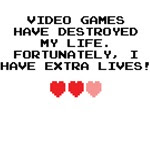 Video Games Have Destroyed My Life.
Fortunately, I Have Extra Lives!