My daughter has a best friend and she’s only two. I would think that, at such an age, she would not be able to comprehend the idea of friendship. She gets it, though. It’s not the kind of friend you find on Facebook. There was no need to confirm or explain the details. It just automatically happened. One day, she looked up and there he was. She smiled and that was all it took.

She makes time to sit and watch Sprout or just run around and play with her friend. They don’t spend every waking moment together, but they are pretty close. My wife asks her what she thinks of her friend and she simply replies, “My favorite.” They share adventures together and sometimes a cup of “pretend” tea. There has even been a muffin or two served. She even wears an oven mitt when she gets into her play oven to retrieve them. My wife pretends not to notice because she likes to just sit and watch them play, uninterrupted. They even share secrets. She has whispered in her friend’s ear a few times, although she doesn’t understand the concept of volume enough to bring it down to where nobody else can hear it.

I’m sure, one day, like most of our childhood friends, they will grow distant. Eventually, she’ll move on to new friends, but I hope she never forgets her because the first “best friend” is the one by which all others shall be measured against. I remember my first best friend when I was a child. I was probably only two or three at the time but, I still recall the times we spent together. It’s not the same thing, but with friends, it doesn’t matter. Friendship is universal, no matter what the case. 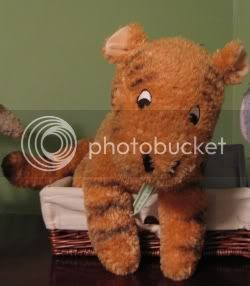