But man, the hype. The Mega Millions made the rounds of two awards shows as joke fodder. The Kids Choice awards and the American Country Awards both had mentions of the big jackpot.

As for myself, I played $20 and even played the numbers from LOST. 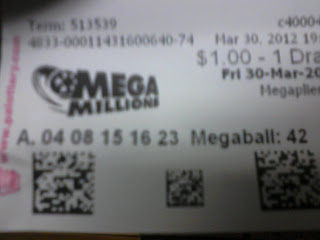 Guess what? I lost.

But now that Mega hype has died down the real issues arise. The scandals.

When will people learn? If you are the coordinator of your work’s lottery pool, you need a little CYA quality assurance.

For me, I took the ridiculous task of coordinating efforts, collecting money, buying tickets, and giving out bad news.

But I was smart about it. I collected all the money ahead of time, giving people a Wednesday through Friday window of opportunity. I made sure to offer inclusion to anyone in the office. And then I went to buy the tickets somewhere that I could do without the lines and madness, to ensure that everything was right.

I walked into the local beer distributor near my building and had complete attention of the cashier. She took all my cash, we counted it twice and then we counted the tickets twice to make sure we had the exact number. Then, I scanned all of the tickets into pdfs and emailed them to all of the participants. That way, if we did win, and I stress “IF”, I had no chance to have that awkward, “Well, I bought the winning ticket separately” moment. In fact, I did buy mine separately, later at a completely different location.

Why don’t people get that? We’ve already seen two cases recently in the news where the winner claimed to have bought the ticket separate from the group they bought tickets for and the first one ended up being decided in court, in favor of the coworkers. How does this lady from a Maryland McDonald’s think she’s going to get away with this? Unless she made two separate purchases with different amounts of money and they can place the winning number into the second pool that was her own purchase, she’ll have to share the winnings.

Sometimes lotteries bring out the worst in humanity. You can imagine a tight knit group of people turning on each other like it’s a bad movie. Even with the prospect of the most evil aspects of human nature taking over, I’d still want to win. I mean, duh!

I’d just be smart. Immediately sign the back of the ticket. That’s tops overall. The last thing you want to do is misplace it where someone else can find it. Next, contact a lawyer and get a financial person involved to set up a trust or some kind of shelter so that you can’t take advantage of your urge to go Brewster’s Millions with the winnings… especially, since you may not even have them yet. Then plan the exit strategy.

I say exit strategy because as soon as you go public with the news that you’ve won, you will be inundated with all sorts of ridiculousness. I do think that I would at least treat my family to a week or two long vacation on me at a nice beach house to plan what to do. I’d want to include them somehow, but for everything else, I’ll probably go off the grid.

The fact that the at least one of the winners, scandal or not, has been identified is probably a bad sign. That kind of thing you want to drag out as long as you can. I want enough time to get all my ducks in a row before the world comes crashing into my life.

So, I guess not winning is kind of a blessing. Then again, they keep saying that money can’t buy happiness. Fine, challenge accepted.