Remember To Pay Your Taxes

I learned a little something about taxes this month.  I learned that ignorance does not excuse you from paying what you owe.

Six years ago when I started Mongo, Angry!  Mongo Smash!  I had little hope of ever turning any kind of profit.  I mean, after all, it’s an Internet business with hardly any overhead, manpower, or buzz.  Three years later, I went from zero profits to needing a 1099 and the meager empire was just taking its first breaths.  2010 was first year I had to do any kind of real tax consideration for my shirt sites.  I worked it all out with my tax guy and unfortunately, my return was cut in half that year.

This past year saw an increase of about 20% in revenue, while maintaining less than $500 of actual cost of ownership.  Seems great right?  It was until I saw my tax forms.

I owed as much as I had coming back to me last year.

So, where did I go wrong?

I turned a profit.

That sounds a little ridiculous but it’s the truth.  Well, that and I forgot to pay the quarterly 1040 payments on the business.  Seeing as how my family’s income and my self-employment income all fall into the same bucket, I thought I was already paying on it.   Apparently not.  There’s a little thing called a 1040-ES that needs paid every quarter.

See, when you have a regular job with regular deductions from your paycheck, you don’t think about those things.   When you are the business owner and are only getting a 1099 from the sites you do business with, the responsibility falls on you to pay those taxes. 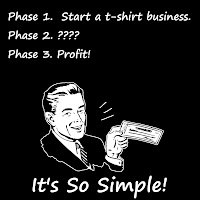 Unfortunately, Phase 2 is Pay Your Taxes.﻿

So, I have to pay last years, plus a penalty, and the first quarter of 2012’s putting me in the red from the starting gate.

I plan to meet with my tax guy after the end of the busy season and discuss deductions.   For one, I use a room in my house as an office.  That’s a total year of my electrical bill divided by the number of rooms in my house.  Then I can claim that.  I can also probably do that with my Internet connection since more than 75% of my Internet is devoted to shirt work.  I pay $60 a year to CafePress for a premium shop, $10 a year to Zazzle for free ground shipping, and I spend around $200 to do giveaways throughout the year.   Granted, I should be able to deduct my cable bill, my Entertainment Weekly subscription and my car since I will be making it an advertisement tool.   But, let’s not go from making t-shirts to making license plates, just yet.  Slow steps.  That’s how it works in my business.

Well, that’s your newest tip for success.  As always, I serve as an example of what not to do for your benefit.