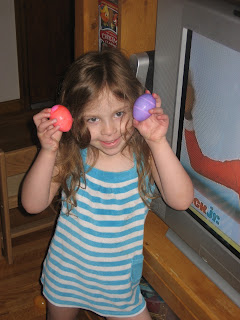 Here’s a little tip for all you parents out there just getting into the threes and fours with your children.  Expect the ruination of any holiday by your own hand.

On Good Friday, while my wife was at work, I took on the task of coloring eggs with my daughter. I set it all up and let her have at it and she did a really great job. She colored 2/3 of the eggs all by herself. She put the eggs in the cup and put them on the rack to dry. No parental mucking up of the process.  It was because of that self sufficiency that made it horribly apparent that this would all end in tears.

See, after Easter is over. Those eggs need to be dealt with in some manner. You either use them or throw them away.

Personally, I’d rather use them. Chef salad and egg salad sandwiches are a wonderful use of hard boiled colored eggs. Unfortunately, they are also the last fates a four year old wants to see beset upon her prized colored eggs.

Last Wednesday was the day of eggs-ecution. I had hoped to do it in secret but unfortunately, my child is nosy and has to be involved with everything regardless of what kind of exploration Dora is doing at the time.

I pulled the carton out and began to peel the eggs. There was some initial begging and pleading for the eggs on her part. There was even some bargaining for a commuted sentence. I even think she promised to be a good girl at one point. Alas, dinner would wait for no one, not even the sobs of a four year old.

She fled to the safety of her bedroom and wet her pillow with the sobs and wails of someone who just watched their child put to death for the amusement of others. All her hard work, the accomplishment of coloring the eggs by herself, destroyed by the hand of the father. It was almost a tragedy of Greek or Biblical proportions.

Eventually, the cries of anguish subsided, replaced with the sounds of snores. She had cried herself to sleep, the poor thing. And in an hour, she was awakened for dinner and the sobs and ire for her father resumed.

But, I was to not be outdone by my wife who placed her bunny crazy straw in the dishwasher this past weekend. She straightened that bitch out… and I’m talking about the straw.

As I sat there, waiting for karma to free me from the guilt of being made the hand of fate against those eggs last week, I was given the cold shoulder and my daughter said, “It’s OK mommy. It was an accident.”

Is it weird that my brother and I always had this understanding that the eggs eventually got eaten, occasionally by us, and we were totally okay with that?

I don't think so. I don't remember ever having a problem with eating a colored egg as a kid. I think she's a bit more sensitive because she was very proud of her work. It was pretty much her first go at doing it solo.