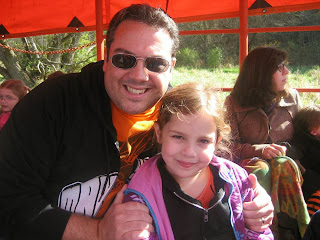 I am writing this in protest because you will never be allowed to date.  But I know you will, so I better at least acknowledge it.

When I was younger and thought about the eventuality of having kids, I always wanted a son.  I know that's a really bad outlook.  It's just that I didn't understand girls.  I still don't.  I just figured it would be easier, ya know.

And even while you were still unborn and camera shy at the sonograms, I thought, "Maybe it will be a boy.  You never know."  I'd drive around in the car and have these philosophical discussions, with an empty backseat where you'd one day be, dispensing all my worldly knowledge about whatever it is I'm supposed to know at my age.  Guess what?  It isn't much.  When I say "I don't know" to you, I really don't know the answers.

But, when you were actually born and I held you, knowing full well you were a girl, I died that day.  I died and in the ashes was a rebirth of a man.  And this man was a father of a beautiful baby girl and he was never more in love with any creature on this Earth than you.  My heart hurt so much with love that I couldn't breathe.  And I was scared, too.  What the hell was I going to do with a girl, turn her over and say, "Yep, she's yours... figure out, other woman"?  Was I going to lock you up from the world and hope that a boy wouldn't dare take one step onto our lawn?

No, I couldn't do any of that because I wasn't always going to be able to.   My biggest problem in life is that I've tried to just solve the issues in our lives and not actually let someone figure them out themselves.   Instead of giving a general idea of what needs to be done, it was just easier for me to say, "Just give it here."  I can't be the answer for everything, so you need to know how to take care of yourself.  That's why I am so damn hard on you all the time.  That's why I constantly say take a hands off approach and try to let you figure certain things out.  Turns out, it works to a fault.  You're smarter than me and can do more than I ever could at your age and it gets you into trouble when you shouldn't attempt certain things.

So, in about a decade, you're going to attempt something else that I can't control or figure out.  Dating.

It's something I never could do right, then, and I still can't, now.  It's probably why I didn't do it that often, when I was a teen, and pretty much gave up on trying to figure it out when I got out of college.

In that way, I can't give you advice on how to date or how to find love.  That's something else you'll have to figure out on your own, and with any luck, you'll be better at than I was.  I pretty much know you will be, so no worries.

But, what I will say to you is something someone once told me about this kind of thing.

Be in something extraordinary.  Don't settle.  If they're not the best person for you, then you shouldn't be with them.  But remember this, too.  Guys don't know anything more than you do.  So, you have to be careful, but you also have to be better.

Now, I've made it as a personal mission to make sure you don't grow up just being a girl.  If you choose the tea parties and princesses route, I won't love you any less.  But, I know you, and you're rough and tumble just as much as you are tiaras and tutus.  I've hated how gender biased toys are in this world and you can be a scientist or a beauty queen with equal chance for success.  But what you need to realize is that with boys, we are pretty much stupid.  We need things spelled out for us but don't think we don't like you because we don't say it.  Sometimes we're just afraid you'll laugh at us.  So, give us a chance to show you before you break our hearts.

Also, don't let a boy hold the door for you, if he wouldn't do it for anyone else who isn't a girl.  Don't let him pick up the check if it means that much to pay your own way.  But talk about it.  Let him know why you would rather him not, if you so choose.  Then, let him pay anyway, just so he knows it's not an invitation for anything else.  You're not obligated to do anything.  You are far too independent to be coddled and even though chivalry is a nice concept, you are certainly no one's damsel in distress.

Definitely don't let a guy treat you badly and don't ever accept that you deserve it.  Just as you should never treat a guy that way.  As I have tried to raise you to be just as equal in strength and character as a boy, they are just as sensitive and vulnerable as girls.  But there are some men AND WOMEN out there that feel that people should be treated a certain way for whatever reason and it's not right.  You will never happiness at the receiving end of a harsh word or fist.  Also realize that it works both ways, too.

Be clear with a boy, because chances are more of them are going to fall madly in love with you than you will with them.  If you're not into them, let them know up front.  Be decent enough to explain that you don't feel that way.  Believe me, it will be a lot easier on the both of you let him down easy and early.   If not, he might shower you with praise and affection until you want to crawl out of your skin and he won't understand why it's not working.  Worse yet, he might overstep boundaries because he felt you were a tease.  I just don't have the money to bail you out of jail when you kick his ass for stepping over the line.

If you like a boy, and there's a chance he likes you, tell him.  Don't play games.  Don't make him pass tests and try to figure out his intentions.  The worst thing that ever happened by telling someone how you feel was for them to not return the sentiment.  No harm. No foul.  It's embarrassing and will probably hurt for a bit, but being honest is better and you might find it works a lot more.

Oh, boy... when it comes to um... being intimate....OK, man, pull it together, respect yourself.  I cannot stop you from having physical needs and I just hope you are safe and healthy about it.  Don't ever, EVER, think that you will make someone love you more because you give into them physically.  If you are not ready, then you are not ready.  And, don't pressure them because you think that they need to show you how they feel by being intimate.   And this will probably get me in trouble because, well, I'm a guy and it's still different, but you can say no at any time and it's not wrong to do so.  Any man worth your time will immediately understand and comply.

However, understand that even though you have every right to say no, that word may fall on deaf ears.  It's not you, it's them.  You should never be ashamed for being who you are, but sometimes, people are assholes and usually, it's someone you trust.  Don't ever forget that no matter how strong you are, there is always someone stronger.  I will never blame you for something happening, but you cannot expect everyone to be the best possible person in every scenario.  That being said, I will go Liam Nesson on their ass.  Just understand that you have a power that isn't fully quite understandable by you or others who are interested in you.

And eventually, you will probably find yourself with someone you love enough to want to marry.  For all that is decent and holy, let's not have a huge wedding.  I mean if you really want one I will do whatever I can to give it to you but realize that your wedding day is never for you.  It's always for other people.  It's for a DJ or band to be heard.  It's for a photographer to add to their portfolio.  It's for a caterer to drum up business.  It's for family and friends to share in your day or get free food and drink at the cost of a crock pot.   If you want a day for you, do whatever it is that makes you happy.  And that means finding someone who makes you happy, too.

Just do it all after I'm dead.  OK?  Because the day you come home and tell me you're in love, it will probably kill me.

I love you sweetie. 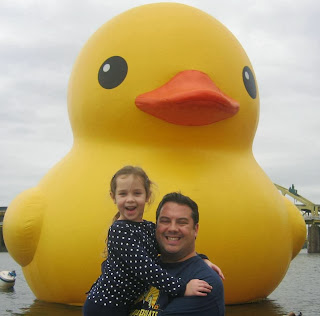 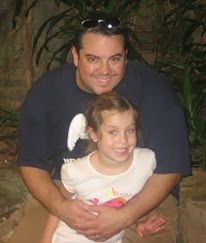 
Get Free Stuff or PayPal Cash!