A Tribute to Myron Cope 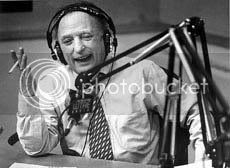 Brief Summary of Cope's Life and Career
Today's previously scheduled entry has been pushed to tomorrow in order to pay tribute to a man who has made an indelible impact on sports broadcasting. Sadly, Myron Cope passed away yesterday, February 27th, 2008. Born Myron Sidney Kopelman, Cope's early career took him from a job at the Erie Daily Times, now called the Erie Times-News, to that of a freelance journalist. One of his most notable stints was with Sports Illustrated in which his profile of Howard Cosell was selected as one of the 50 best articles published in the magazine during it's 50th anniversary year. 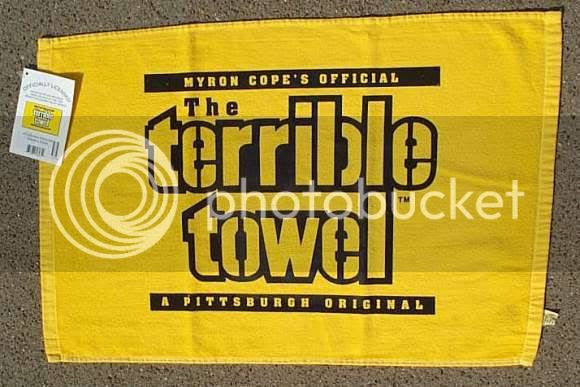 In the 60's Cope moved into radio and his unique and distinct vocal style was recognized by the Pittsburgh Steelers organization. In 1970 he was made a member of their radio team. As the Steelers dominated the 70's, Cope's fame grew. Perhaps his biggest contribution came in 1975 when he urged fans to take yellow dish towels to a playoff game against the Baltimore Colts. As a way to excite fans and add that 12th man to the field, he instructed the fans to wave their dish towels throughout the game. While some players were less than enthusiastic about resorting to a "gimmick," the towels, now called "The Terrible Towel" seemed to bring a bit of magic to the field and the Steelers defeated the Colts 28-10. Official towels were made in time for Super Bowl X in which The Steelers beat the Cowboys for their second Super Bowl win that decade. Throughout the 80's, Cope did commentaries and editorials for Pittsburgh's ABC affiliate, WTAE. Dressed in a lab coat and calling himself Dr. Cope, he analyzed the opposition each week against the Steelers. Segments memorable ended with the phrase, "This is Myron Cope, on Sports." Crossing ino the 90's, Cope appeared in various music videos spoofing popular songs like "The Macarena" and "Achy Breaky Heart" all themed around the Steelers.

In 1996, Cope pulled his biggest, and most philanthropic stunt yet. He gave the rights and ownership of "Myron Cope's Official Terrible Towel" to the Allegheny Valley School. The school provides care for people with physical and mental disabilities. Cope's own son was born with severe autism and haslived almost his entire life at the Allegheny Valley School. Proceeds from the sale of "The Terrible Towel" have raised over $2 million dollars for the school since 1996.
Cope retired from broadcasting in 2005 after numerous health issues deteriorated his voice. He was honored with the Pete Rozelle award shortly after his retirement for his longtime contributions to pro football in radio and television. Sadly, after several bouts with pneumonia and cancerous growth, removed from his throat, Cope died at age 79 in a nursing home in Latrobe yesterday.

My Thoughts on Cope

As a life long Steeler fan, I was saddened by the news of Cope's death. He was one of those people you either loved or hated, based on his voice. His shrill, falsetto, tone seemed to grate on some people, while others relished in his color commentary which included some of the strangest, yet appropriate catchphrases. A common practice within the Pittsburgh and surrounding area was to watch a Steelers' game with the sound on the television turned down and listen to the radio, tuned to 102.5 FM, to hear Myron. Along with Bill Hillgrove and former Steeler, Tunch Ilkin, they provided an experience that rivaled no other when it came to professional sports. Cope joins ranks with Bob Prince and Mike Lange as the Holy Trinity of Pittsburgh Broadcasting. He was nothing exceptional to look at. He looked like a cross between Burt Young and a Koala Bear on a three day bender but he could weave a story. I can vividly remember driving around doing some last minute Christmas shopping and listening to the Steelers lose a 6-0 heartbreaker to the Jets during their dismal 2003 season. After halftime Cope began telling a long story from his youth involving a bar, hookers, and another broadcaster. He would intermittently add chapters to the tale in between action on the field. He managed to take the entire second half to recount this story and made the loss a little more enjoyable. He was the kind of person that had some of the greatest stories to tell.

Cope's greatest stories appear in his book, "Double Yoi" which he retold on WDVE's morning show. It involved a road game on a Thursday evening in which Cope realized it was garbage night and shouted over the air, "Mildred, it's Thursday Night, put out the garbage!" His partner, Jack Flemming doubled over with laughter during the broadcast. The following year another Thursday night game was scheduled and at some point during the broadcast, Flemming shouted "Mildred, it's Thursday Night. Put out the garbage!" Always striving to be a private person, Cope hated to bring his personal life out into the homes of hundreds listening in to the radio. However, when you have such a storied career, people tend to listen and remember. WDVE has included this story in one of their compilation CDs that they produce each year for charity, forever cementing Cope's garbage night tale into broadcast history.

When Cope retired in 2005, I remember driving, to of all places, Cleveland, OH, and listening to his press conference on the radio. It was the end of an era and I knew that listening to the games would never be the same. I find myself still listening in the car when I can't watch, but I rarely turn the television sound down when I'm watching at home. It's a shame that Cope missed two very important events in the history of the Steelers. During the 1972 AFC Divisional Playoffs against the Raiders, Cope and Art Rooney were taking the elevator down to the field at Three Rivers Stadium. Cope on his way to do post game interviews, Rooney to console his team on the loss. During the trip, Bradshaw threw a pass to Frenchy Fuqua, which bounced off of either Jack Tatum's shoulder or Fuqua, depending on who tells the story, finding its way into hands of Franco Harris' fingers nearly on the ground. 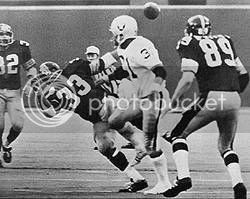 The "Immaculate Reception" dubbed by Cope, on suggestion from a fan who called him that night, became one of the greatest plays in the history of the Steelers giving them a touchdown and the lead over the Raiders It was cited as the greatest play of all time by NFL films. The play would have only been greater if would have paved the way for the Steelers to win the Super Bowl that year. Unfortunately, this was 1972 and the year the Dolphins went undefeated. 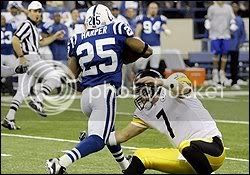 Cope also missed the return to glory by the Steelers in 2005 when he retired before the season and was not in attendance in the booth during Pittsburgh's magical season which included a sixth seed in the playoffs and four on the road wins to capture their fifth Lombardi Trophy. Even though they were considered the home team in Super Bowl XL, Pittsburgh opted to play in their away jersey's signifying their road warrior status. Ironically, the post season also included a miraculous play in the AFC Divisional Championship game at the RCA Dome in Indianapolis, when Jerome Bettis fumbled, giving Nick Harper a chance to score on the recovery. He would have ran the length of the field for a touchdown had Ben Roethlisberger not grabbed his foot and brought him down. This play nearly ended the Steelers' playoff season and has been called, "The Immaculate Redemption" or simply, "The Tackle."

I'm sure that there will be a great number of tributes to the gravelly voiced Cope on the news and the Internet in the days to come. It's my feeling that the Steelers' should produce a black version of the Terrible Towel to be waved in tribute to Cope at the Steelers' 2008 home opener. Perhaps a statue in his likeness outside the Coca Cola great hall where he held his post game shows called Cope's Cabana. Perhaps even a dedication of the broadcast booth in his name. This was a man that could have easily cashed in on "The Terrible Towel" and retired a very rich man. Instead, he endowed The Allegheny Valley School with ownership of his invention and it has help improve the quality of life of hundreds of disabled people. He certainly has earned the respect and love of his listeners as well as his former employers, and anything less is a load of Gorgonzola.

This is Angry Mongo, on Cope. 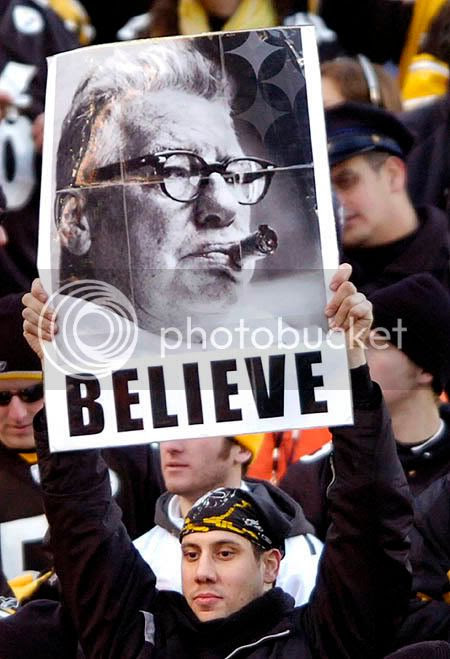