Now that I've had a chance to digest the entire 16 days worth of Olympics, I must say...I have a tummy ache. Actually, I didn't get to watch much of the games. I don't get to watch much television as it is. I still have four episodes of Grey's Anatomy to watch from last season and the rest of my DVR is 93% full from other junk. To actually sit and watch total coverage of the Michael Phelps Olympics would be insane but I'm sure there are people who did it.

Now, I did catch the Michael Phelps phenomenon and while I'm really happy for the guy, I have to say, "Leave him alone for one night." The other event I made sure to watch was Women's Beach Volleyball. Wow, if anyone has bragging rights is these girls and guys, too. They should all go into the gym and make snickering laughs at the indoor volleyball teams. To be able to cover almost the same amount of court, in sand, with only two people takes talent. Now, of course, USA won the gold and there was some matches, especially those wacky Belgian ladies with that freakishly tall Mouha woman. Though, it didn't take long for May-Treanor and Walsh to figure out how to drive around the Mouha block and park it in there. However, what really made teary eyed was watching the final match and seeing how far the fandom of my hometown's NFL team reaches. Check out the corner of this picture. The Terrible Towel is in the house out in China. Hell yeah! 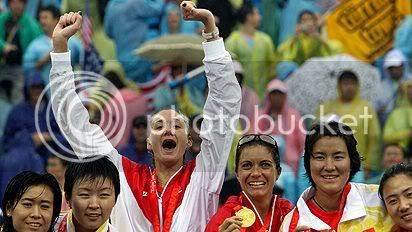 All seriousness aside, the Beijing games left me with little satisfaction. Perhaps it was all the controversy leading up to the games. Maybe it was the fact that they pulled an Ashley Simpson and had a little girl lip-synching during the opening ceremonies, because the original girl wasn't cute enough for television. I think I contribute my disdain for the games to the lack of good marketing of the games themselves. I don't mean the commercials. I mean the graphical representations of the events.

Now, I can remember being a nine year old sweating it out in my family room, watching the LA games in 84. We had no air conditioning and even though my friends and I were usually playing baseball or some other outdoor activity during the summers of my youth, I was glued to the set watching the games because not only were they on American soil during the Cold War, the TV guide gave me this wonderful little handy dandy viewing chart to all the events. It was pretty cool. It folded out and everything. Beside each row of times was this little pictogram of a stick figure that represented each event. Finally, someone with my drawing capabilities was speaking to me. But we're beyond that, now. 24 years later we have Photoshop and talented people working on these types of projects. I would have expected a little more flair. Let's just take a look at what we're dealing with here at the Beijing games.

OK, this is....anyone...yes, Badminton, twenty points if you're playing along at home. But, how do you really know what it is? It could be someone blowing bubbles at a piece of candy corn for all you know.

Here we have Beach Volleyball. Not too hard to figure out. But, what looks like sand could be anything such as water or even bird tracks.

Now, what in the Blue Hell could this be? Is it a giant 'R' riding a toothbrush? No, it's Equestrian. Oh, wow, now I see it. Here I thought it was a dental hygiene picture.

Not very artistic and awe inspiring are they? To me, the artwork for the games should reflect a certain aspect of the home site culture. Perhaps if all the pictograms were designed like Chinese lettering if would be more stylistic. Personally, I think they really missed the rickshaw when it came to depicting the events. Thankfully, someone over at Google was taking care of business. In fact, the Athens' games of 2004 had some catchy logos that used Greek Mythological deities quite well. Beijing and China have so much culture and legacy that the artists could have done some pretty cool things with the pictograms. How eye catching would it have been to see a giant panda doing a handstand split depicting gymnastics or a South China tiger jumping in the air ready to spike a volleyball? With other animals like the golden haired monkey or an ancient dragons to choose from the artists could have had a field day.

I admit, I'm not in marketing but even I would have drawn into the games more had they played on the anthropomorphic design with the pictograms. But then again, I probably would have just set my DVR to record and been forced to scuttle my last four episodes of Spaced. After all, I really wanted to watch events like kayaking and archery but never knew when they were aired. Unfortunately, I didn't have a TV Guide handy to tell me what this symbol is...

P.S. If you guessed wrestling, good for you. I was stuck on female reproductive system. You should see my results from the Rorschach test.