We gathered the information. We populated the list. Mistakes were made. People were forgot. It’s a process.

Actually, as I was making the list I had the unfortunate task of having to cut some people. They either didn’t fall squarely into a category or they just didn’t make a compelling argument until later. So, I would like to offer you a second look at some of those who didn’t make the cut but still have an impact on pop culture.

Vision Quest was one of those 80's movies that I was never allowed to see as a kid. I never understood why. Yeah, it was Rated R but the it only because of some of the sexual situations and some language. However, Louden was one of those characters that took high school to the next level. After turning 18, he all of a sudden decides to do something meaningful with his life. He decides to drop two weight classes in order to wrestle an undefeated rival. In the midst of his quest he jeopardizes his team dynamic, his relationships with his peers and mentors, and over all, his health. But this wouldn't be a coming-of-age 80's drama if it all didn't work out in the end. It has one of the better 80's soundtracks and an appearance by Michael Schoeffling as Kuch, sporting a pre Major League, Rick Vaughn, Veg-O-Matic hair cut. You'll know Schoeffling from Sixteen Candles as Jake and also on our list as Stud Number 2.

Molly (Jessica Alba) from Idle Hands
The writing was on the wall even if it was done with a possessed severed hand. Jessica Alba was on her way to utter babedom. Technically, Alba was most likely 17 when the film was made but we’ll tack on life begins at conception to make us not feel so dirty thinking about her character prancing around in her underwear. Where was I? Oh yeah, the Devil would love to get Molly’s soul and the fact that she can apparently play bass guitar, remnant of a deleted scene which made its way into the background of another scene. 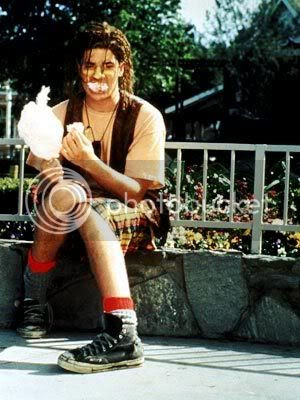 Link (Brendan Fraser) from Encino Man
This is more of an apology than anything. I cannot believe I forgot about Link, the caveman who awakes to find himself thrust into the Southern California lifestyle. He looks good, for not only being illogical placed on Earth during the first ice age, but he doesn’t show signs of freezer burn which means his freshness was sealed in, Buuuudddyy. This post 80’s high school-underdog-topples-in crowd-to-win-the-heart-of-a-popular-girl-while-learning-something-about-staying-true-to-your-underdog-friends-film not only boasts the longest hyphenated film theme, but one of the two instances where Pauly Shore was actually good in a movie. The other, of course, is Son in Law. Let’s look at the tape to review all the 80s movies tropes. Link gets thawed out and immediately adapts to his surroundings. We have a music montage makeover that turns Link from dud to stud. We have high school women swooning and bullies steaming. And to top it all off, Link teaches Dave something about being real. What more can you ask for? How about inclusion in the top 50. I wish I could go back. 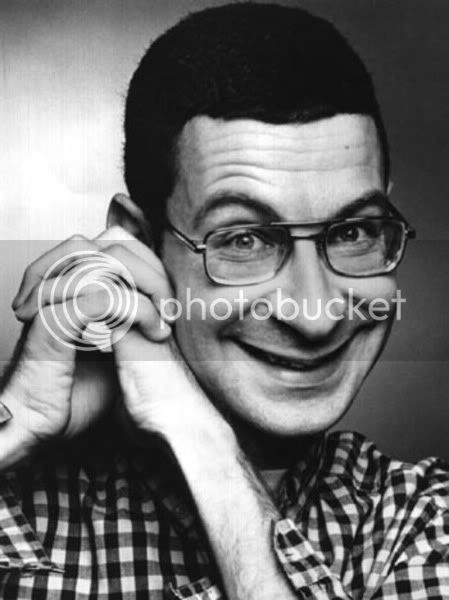 Eugene Felnic (Eddie Deezen) from Grease
If ever there was someone typecast as a nerd or a geek it would be Eddie. In his first film, Eddie played Eugene Felnic, the resident nerd at Rydell High. I guess there was only one of them attending Rydell and it was Eugene. In fact, he had to come back for the sequel since they needed a nerd around and bookish Michael Carrington was too good looking to fill the role. Considering the fact that he was the main character and supposed to be able to snag Stephanie Zinone, I can see why they went back to Eugene to fill the quota. Unfortunately, for him, Deezen’s guidance counselor must have sold him on the idea of being a nerd professionally and Eddie has pretty much cornered the market on the archetype in college (Midnight Madness) and in the real world (War Games), although, he was considered too geeky for Revenge of the Nerds, go figure.

Nancy Downs (Fairuza Balk) from The Craft
At first, we nervously applaud Nancy for standing up to her abusive step-father. She causes him to have a heart attack with witchcraft. Yet, that starts her down the path of evil as she moves on to invoking the Spirit and brings about Manon. Then, she causes Chris to fall out of a second floor window, killing him. She  tries to get Sarah to commit suicide.  She continues to torment Sarah afterwards and pulls her underlings into the mix as a show of solidarity. But of course, with Bitches or Bullies, if you take them down, the underlings fall apart. Regardless of her sanitarium sentence, Nancy is one bitch I wouldn't want as a witch. 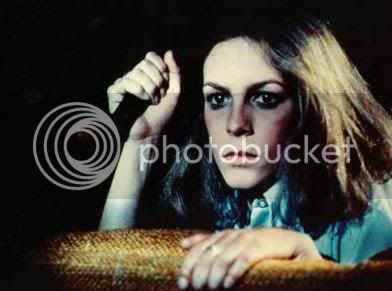 Sometimes traumatic or prolific events can bring about the greatest change in people. The villain becomes the hero, the nerd becomes the stud, or the bookworm becomes the bad ass. Laurie Strode is one such bad ass. Her simple life of books and babysitting comes to a screeching halt on Halloween night when her psychotic masked brother comes home to Haddonfield to carve himself a sister. At first, Laurie is the victim, chased by the relentless evil Michael Myers.  Then she becomes the quintessential final girl, outlasting of all her friends. And even though she is often saved by others, including Dr. Loomis, there is that moment near the end of Halloween that leads to her transformation into a bad ass. While hiding in the closet, she attacks Michael Myers with a coat hanger and stabs him in the eye. At that moment, she switches from victim to vigilante and it carries on into the later movies. One of the best goose bump shots from Halloween H20 is the sight of Laurie Strode standing at the gates of the school, with an axe, yelling the name “Michael!” 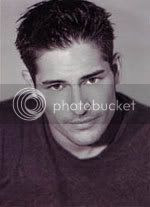 Flash Thompson (Joe Manganiello) from Spider-Man
Ok. Some will say I copped out here. Not because I picked an unworthy character like Flash Thompson, but because I was in a bind, and picked Joe because I kind of know the guy. I needed a bully and I couldn't come up with one. I should have included him in the regular list but, alas, I wanted to not show any bias. I will admit that, being an arm chair pop culture blogger instead of a working actor is a little disconcerting, but I've made my peace with it. You see Joe started out his collegiate career at the same place I did and we even did a play together before he left for CMU and then Hollywood. I ran into him at the grand opening of the Hard Rock Cafe in Pittsburgh after the Spider-Man phenomena settled down  and we exchanged pleasantries. But, I'm digressing. Even though Flash was conceptually your typical Jock/Bully, often portrayed as a lunkhead in the comics and cartoons, Joe crafted the character into a hard edged, chain wearing brute who torments Peter Parker while in school, but doesn't appear to be the football star his comic counterpart is. Since the first film took the characters through high graduation early on, there wasn't much more for Flash to do in terms of bullying. Now, three movies in, I don't know if we'll get to see much more of Flash in the armed forces or facing alcoholism, but it would have been nice to have Joe come back for more than a cameo at Harry Osborn's funeral, as he did in Spider-Man 3. 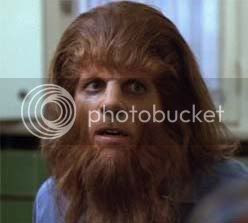 Scott Howard (Michael J. Fox) from Teen Wolf
I tried my best to limit repeat appearances by actors but Michael J. Fox was an 80's powerhouse. I almost went with Devon Sawa from Idle Hands but I also drew from that film for another Honor Roll Student. Back to the Wolf. Scott Howard is one of the characters that also deserved to be on the main list but I knew that I wanted to include Marty McFly and so I had to scuttle the lesser successful of the two films for greater impact. I also included Mick as a bully so it spelled disaster for the Teen Wolf. But appearing on the Honor Roll doesn't make Scott Howard average, something the character strove to overcome until he found out his lycan lineage. I mean who wouldn't want to have Scott on the basketball court or in the beer distributor. He also pre-dates the Ghost Riding craze by doing a hand stand on his dad's hardware store van. Well, not quite. He did have a driver. 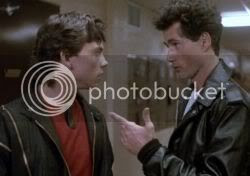 Bobby Fantana (Lewis Smith) from The Heavenly Kid
Don’t try to do the math on this one. Lewis Smith was 27 when the movie was made and supposedly the film’s beginning is set in the “Early 1960’s” If we deduce that this meant pre 1965 then Lenny Barnes must have flunked a few grades because he would be 20 and still in high school. In any event, it’s an 80’s movie and logic doesn’t have to apply. You just accept it. Moving on.  Bobby is still considered a high school student because he died before graduation. Sitting in purgatory for 20 years he discovers that he has to earn his wings as an angel by helping a nerdy kid, which turns out to be his son, make the right choices. Using only what he knows from his days on Earth, Bobby tries to make Lenny into a cool kid by giving him an 80’s movie montage makeover, complete with a bitchin’ classic car. What he doesn’t realize is that he must have been a bit of a prick as Lenny starts to turn on his friends and family once he becomes cool.  This is in true 80’s movie makeover fashion. Still, he manages to keep the kid alive long enough to see the error of his ways and earns his ticket uptown on the longest escalator ride ever known. How they managed to pull off that effect, I’ll never know.
Slacker 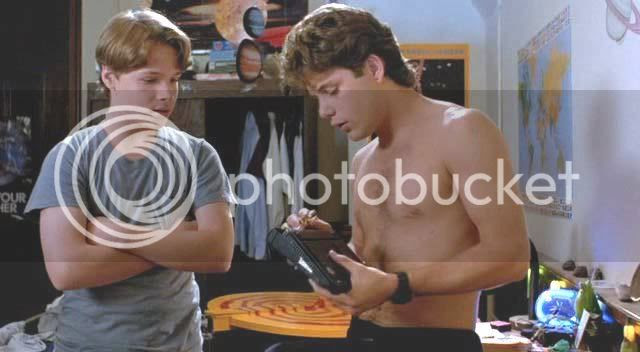 Billy Tepper (Sean Astin) from Toy Soldiers
Slackers are truly one of my favorite archetypes in pop cinema. They either steal the show from the more straight laced leads or they complete a character arc that allows them to grow. Granted, it’s neither plausible or true to the slacker's nature, but it makes for good popcorn. Here at The Regis School, the wealthy and somewhat delinquent student body take pride in torturing their administration as well as South American terrorists. When Billy is not selling liquor disguised as mouthwash or rearranging his head master’s furniture in the quad he’s taking on Andrew Divoff, best known as Mikhail “Patchy” Bakunin on Lost, after the school is taken hostage.
Posted by Mongo at 10/17/2008 06:34:00 PM