B is For Idiot

It's not a crime to be passionate about your beliefs. It's not a crime to want to have fame. But when you go beyond that passion and try to gain fame you can cross over into a whole new realm of crazy. This election has had its share of celebrity. First, Barack Obama was labelled a celebrity, holding flashy rallies on the scale of rock concerts. Then there was Joe the Plumber, who told Obama that he planned to buy his own business and was afraid that under Obama's tax plan he would have to "share the wealth" if he made over $250,000 a year. The latest 15 minute man, er woman was Ashley Todd, the volunteer campaign worker for McCain, who received national attention when she claimed that she was attacked at an ATM machine and robbed. If that wasn't horrifying enough, her attacker noticed the McCain campaign sticker on her car and carved the letter "B" in her cheek in support of Obama.

But now, she's admitted to making up the story and carving the letter into her own face. Her inconsistencies in her story led to a polygraph and the lie began to unravel. Luckily, the 24 hour news cycle had a sense of logic and realized that there were too many reasons that the story smelled fishy. After all, the letter was carved in her face backwards which doesn't sound symbolic in any way. It just sounds like a dumb ass who decided to carve a letter into her face and forgot that the image in the mirror is reversed. Also, being attacked at an ATM affords authorities the ability to look at footage taken by surveillance cameras. Those tapes did not show any transaction being made by Todd or any alleged attack.

Whatever her reasons for doing this whether it be politically motivated Ashley may have just caused herself more trouble than if this were some random act of stupidity. Both the McCain and Obama campaigns called Todd and even made public statements about the attack. Filing a false report is crime enough but the fact that it occurred during an election cycle could spell disaster for her candidate because the rumors may start to fly that this was planned by higher ups in the McCain campaign. Hopefully, this is the product of a lone dumb ass and not some higher plot to grasp at straws in the last days before the election.

In either case, this intrepid blogger has already given her more fame than she deserves and by now Facebook and myspace have a ton of FAIL posters and flair passing around making fun of her. There's a least one I know of.....I did it. I also took the time to put together a little movie poster parody, because stupid is as stupid does. 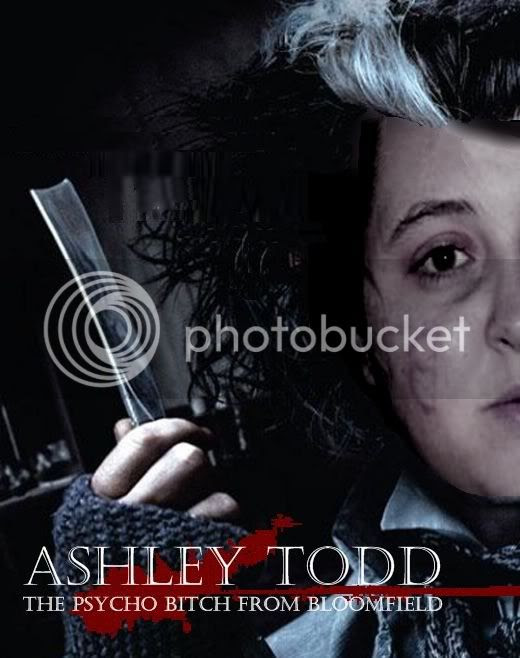