How the Steeler Stole Christmas!

In the ever expanding trilogy of stories by others, I have one more for the Holidays, even though they are over. This time, my wife has been given the opportunity to share a story from her childhood. Now, since I am the more long winded, I will tell the story based on the original recitation by her and her family. Of course, I will add my own little style of storytelling to enrich the tale. Just go with it, I've been watching saved up episodes of Pushing Daisies. The story in question involves two things near and dear to me, Christmas and The Pittsburgh Steelers.

Once upon a time, there was a young girl who loved Christmas. Each year after Thanksgiving, her father would go off to hunting camp for a week and that signaled the transition from fall to winter wonderland in her home. Boxes upon boxes of decorations would descend from the attic and soon the mantles would be adorned in garland and the shelves would hold knacks of St. Nick. Christmas was truly to most wonderful time of the year at her house because her mother would take the entire week to decorate, making their home a rival for any mall in the tri-state area.

When her father returned from camp approximately six days, five hours, and twenty-three minutes later, he would take the family out to procure the perfect Christmas tree. Now, choosing a tree was a sacred tradition that required a lot of thought. After all, the little girl’s heart was so big that she didn’t dare let her Father pick a tree without looking at every possible one, first. She had similar misgivings at Halloween when picking a pumpkin at the pumpkin patch. If she touched the pumpkin or picked it up, she felt guilt in not choosing it as if the pumpkin had some sort of feelings and she wished to spare it rejection. So, you can see that choosing a tree was twice as difficult since Halloween was only half as magical as Christmas.

One particular winter during the early 1980’s, her Father happened upon the most magnificent Christmas Tree ever grown. It was perfect in every way. There were no missing branches, no holes apparent in the canopy. The needles were as green as the greenest tree in winter fairy tales and the top was a perfect point in which to hold the Christmas Star. This was a fantastic find by her father and he only wished he had brought along the truck to this particular lot. He struck a deal with the attendant to hold onto the tree until he could make his way home to change vehicles.

The little girl waited at the window while her Father went back out to retrieve the fabulous fir. Her anticipation was immense and she nearly exploded from the built up visions in her head. She dreamed of mountains of presents under, around, and near the perfect tree, waiting for her when she awoke Christmas morn.

In the distance she saw the familiar lights of her Father’s truck and leapt from the couch to meet him at the door, holding it as if a King were arriving. Her Father walked in empty handed and she peered after him to see if perhaps he had brought help with him and they were the ones holding her tree. Alas, she saw no one else in the driveway. In fact, she saw no tree tied to the truck. She closed the door and gazed at her Father, not noticing the look of disgust on his face as she was too blinded by the prospect of hoisting her perfect tree into the corner of the living room. She asked her Father where the tree was. His response shook the little girl, who loved Christmas, to the core.

"Who was this Rocky person and why did he steal my tree?" she wondered. "What kind of monster would steal Christmas from a little girl?"

She sobbed and wept and after awhile, finally calmed down as her Father explained the situation.

The facts are these. Rocky Bleier was a Pittsburgh Steeler and also a Vietnam veteran. He played in all of Pittsburgh’s first four Super Bowl wins and even caught a touchdown that cemented the lead for the Steelers against the Dallas Cowboys in Super Bowl XIII. To the people of Southwestern Pennsylvania, he was royalty, even after his retirement. So, when Rocky showed up at the tree lot while her Father went home to change vehicles, the star struck attendant had no recollection of the deal that was agreed upon with the Father of the little girl and immediately gave out his best tree to Rocky. Not wanting to go into a lengthy discussion about the situation, he opted for a short answer to his daughter’s inquiry which accused the former football hero of tannenbaum thievery. Years would go by and the grudge the young girl had for this Rocky character endured as much as her love of Christmas. Unfortunately, no tree ever compared to most wonderful Christmas Tree ever grown. The young girl became a young woman and met a young man who shared her love of Christmas. She told him her tale of woe and after the laughter subsided, he consoled her for fear of pummelling.

One day, while working at his job in a hotel banquet department, the young man, who loved Christmas, saw an opportunity he couldn’t pass up. A dinner was being held for a local organization and the key note speaker was none other than the Steeler, Who Stole Christmas, Rocky Bleier. On the back cover of the program was a black and white photo of Rocky in his prime, rushing for the Pittsburgh Steelers. Remembering the story, he formulated a plan. Being an employee of the hotel, he had been involved with the organizers of the event, and managed to gain an audience with the personal assistant to Mr. Bleier. He gave a quick explanation of his intentions and asked if perhaps he could have Rocky autograph the program’s back cover for him. After a quizzical look from Rocky, the young man explained his intention and gave Mr. Bleier the origin for this request. He obliged and the young man, who loved Christmas, found himself in possession of a unique gift. Never being one to truly understand what to give his beloved for the holiday, he thought this would be sentimental and humorous.

He travelled to the local department store to find the perfect picture frame and then carefully removed the back cover from the rest of the program and framed it. On Christmas Day he presented the gift to the young woman, who loved Christmas, and her family. Laughter and amazement adorned their faces as they looked at this picture recalling the story. To this day, the framed autograph hangs on the wall behind the bar in their basement for all to see. 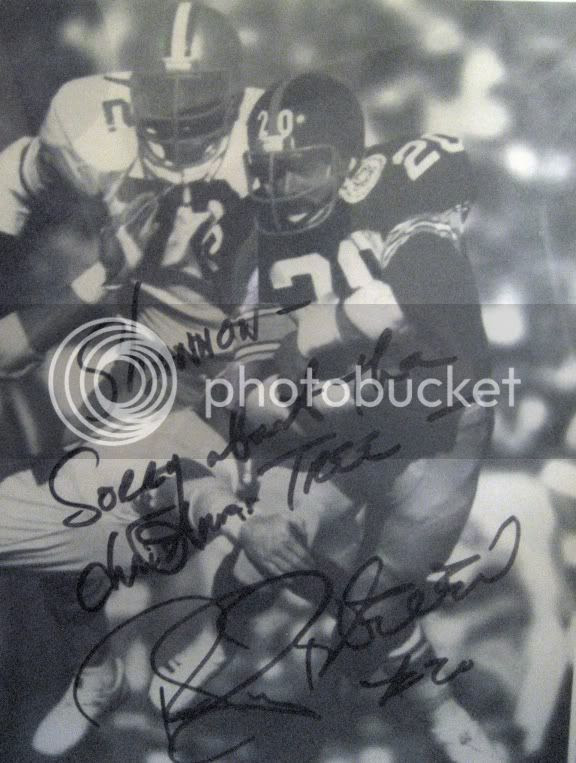