Eat At Sam And Ella's

Over the last few years there have been numerous reports about contamination in foods.

In 2003, restaurant chain Chi-Chi’s closed down over a hepatitis A outbreak due to contaminated green onions. The largest outbreak in the United States resulted in the death of four people and over 600 cases of illness right in my backyard. Granted, the company was on the verge of collapse due to bankruptcy, but the hepatitis outbreak put the nail in the coffin.

In 2004, Sheetz, Inc. was hit with a salmonella outbreak identified in their tomatoes which were used in their MTO (Made To Order) service. The vegetable was pulled from the menu and Sheetz emerged from the tragedy, still going strong.

In 2007, pet foods were recalled because of melamine contamination. The largest consumer product recall in North Amercan history resulted in the withdrawal of over 60 million cans of food which led to the speculated death of over 3000 pets and numerous cases of kidney failure.

Milk and baby formula from China was also found to contain melamine and, in 2008, a scandal erupted as it was reported, by China, that over 300,000 babies had died from kidney disease.

Also, in 2008, Burger King pulled tomatoes due to salmonella contamination. They have since been added back to the menu. 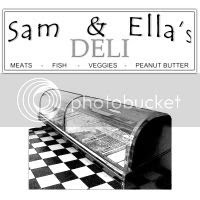 Get Sam & Ella's Deli on a shirt
from Mongo Angry! Mongo Smash! the store.

Tap water has been investigated for trace amounts of pharmaceuticals including Viagara and antidepressants. It's not some government plot to keep us doped up and reproducing. It's just that filtration of old water is pretty poor. And don't think bottled water will save you, Aquafina is really.....tap water.


I think the only thing safe left to eat is junk food. Twinkies, Cheetos, Soda Pop, and Skittles just became the primary items on the food pyramid.
Posted by Mongo at 1/27/2009 07:35:00 AM