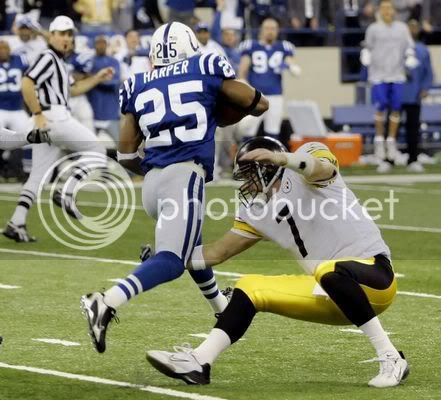 The Pittsburgh Steelers are 60 minutes away from making history. A sixth Lombardi trophy would put them into a class all by themselves. After winning four Super Bowls in the span of six years, there was a bit of a drought. It would 16 years before the Black and Gold would make another appearance at the big show. The outcome of that game, Superl Bowl XXX, was a disappointing loss to the Dallas Cowboys. During those long years, other teams staked their claim to term dynasty. The San Francisco 49ers won their five Super Bowls between 1981-1994. Dallas picked up two more wins before adding number five against The Steelers.

It would be another 10 years before Pittsburgh would make another appearance. During those years another team would standout by winning three rings in four years. In fact the New England Patriots thwarted Pittsburgh's dreams of going to Super Bowl XXXIX in a year that seemed storied. A young, rookie quarterback making his mark at the helm, a seasoned running back in the twilight of his career, and a coach looking to make good on a promise that he made to his bosses all seemed like the ingredients for a great sports film like The Natural. At 15-1, who could have thought they would seem easy to beat in the AFC championship game. Especially, against a team that they easily dismantled three months earlier on Halloween.

Ironically, it was only the preamble to an even greater story. Immediately after their 41-27 loss to the Patriots Ben Roethlisberger offered a doozy of a bond to Jerome Bettis. "One more year."
The 33 year old running back took up the challenge from his 10 year younger QB.

After starting out their season with an impressive opener against the Tennessee Titans, the weeks took a turn towards the disappointing. Losses to the Patriots, Colts, and Jaguars marred their outlook of being able to beat these teams in playoff situations, if they arose. Further losses to two divisional rivals at the hands of the Ravens and Bengals slid the Steelers into a must win situation for the rest of the season's match ups. Beating the Bears, Vikings, Browns, and Lions didn't seem like much of a challenge, but that was only half of the equation. As a sixth seed team in the playoffs it would take winning on the road for the next three games to get to Bettis' hometown of Detroit for Super Bowl XL. A win over the Bengals poised them to take on their toughest post season opponent.

January 15, 2006 was the date of the AFC Divisional Playoff game between the Colts and the Steelers. Their loss to the Colts in Week 13 was surely in their minds. An seemingly unstoppable offense led by Peyton Manning and a deafening 12th man filling the seats of the RCA dome was two obstacles the Steelers had to overcome. Both teams commanded the game in separate halves of play but, by the fourth quarter, Pittsburgh looked to have the Colts dead to rights. A fourth quarter turnover on downs left the Steelers in possession of the ball with only 1:20 remaining on the clock. As professional clock managers, the Steelers only needed to down the ball but the Colts still had all of their timeouts which forced Pittsburgh to advance the field.

An insurance touchdown by their best goal line running back seemed like the proverbial nail in the coffin. However, in a twist of fate, the player who had not fumbled all year long had the ball popped from his possession inches from the goal line. Bettis' fumble was recovered by Nick Harper, who then ran towards the opposite end of the field. The task of running nearly a hundred yards would be hard enough if you had people chasing you, but Harper seemed to have a gracious head start and only had one person to beat, Roethlisberger. If ever there was a moment of, "I can't screw up," it was now. Roethlisberger had promised Bettis and somehow managed to grab Harper's foot as he made his way towards freedom. Six points by the Colts with little time left would have been nearly impossible to answer. The Tackle or The Immaculate Redemption as it's also called makes the list at Number Five. 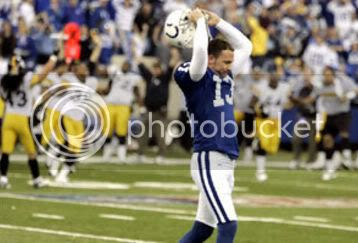 In all fairness to built up drama and tension, Number Four should be Number Five. However, since it happened chronologically in the same game, I choose to not spoil the story by putting it ahead of Moment Five.

Now, who is to say that a tie game would spell a loss for the Steelers' Super Bowl dreams. Their would still be an opportunity to win a coin toss, drive the ball into field goal range and win by three. But those are odds that are usually not in your favor when you leave it all to the toss of the coin. However, Mike Vanderjagt was mister perfect in the playoffs. He hadn't missed a field goal yet. Overtime seemed like an inevitable conclusion in the minds of the capacity crowd at The RCA Dome. I guess you can't mess with fate, though. Vanderjagt went wide right on a 46-yard attempt and that allowed Pittsburgh to run out the clock and head to Denver. The rest is history.
Stay tuned for Moments 2 and 3.
Posted by Mongo at 1/29/2009 08:16:00 AM