Moment Three: Polamalu’s Interception
The Steelers aren’t a team that capitalize on having big name players on the roster. There are certainly big stars in the league like Tom Brady, Terrell Owens, and Peyton Manning but Pittsburgh prides itself on being identified as a whole team, not just a superstar running back, quarterback, or linebacker. However, the individual does contribute as a whole and sometimes, they are the reason for greatness that comes to the whole team.

Case in point, a young long haired Samoan from California can be cited as having a lot to do with Pittsburgh’s appearance in Super Bowl XLIII. During the 2009 AFC Championship game at Heinz Field, Troy Polamalu exhibited why he is a necessary component to the success of the ball club. His speed, agility, and instinct make him a threat to any offense. His off the field calm and gentle nature make him an enigma to everyone else. Troy is one of those players that plays the game. There is a switch that flips when that helmet goes on as if the compression of that mane stirs up a hornet’s nest within him which he unleashes on the opposing team. Hard hitting aside, when he actually comes up with a fumble or interception he becomes what I can only describe as the Pittsburgh version of The Tazmanian Devil. He holds the ball like it was a live bomb ready to go off and he has to get it off the field. He runs with it held in both hands and manages to traverse from end zone to end zone and sideline to sideline, sometimes during the same play.

There are times, while watching the game, when I feel like victory is slipping away from the ball club. I think to myself, “If only Troy could make something happen.” To that, it’s like someone hears my thoughts and climbs to the highest reaches of the stadium to flip on the Troy Signal. A bright beam of light pierces the sky and the outline of a head with flowing locks appears to alert him on the field. Within an instant, he finds himself in between the quarterback and receiver, poised to play take away.

That being said, my pick for The Third Greatest Moment in Steelers History is Polamalu’s interception of Joe Flacco during the 2009 AFC Championship Game. Troy returned the interception for a touchdown which helped propel the Steelers into a commanding lead resulting in a win against divisional rivals, The Baltimore Ravens, and a trip to Super Bowl XLIII.

Moment Two: Super Bowl XIV Comeback
After winning three Super Bowls, greatness seems to be a secondary thought to the 1979 Pittsburgh Steelers. Still, sometimes, you don’t have to always be great, just when it’s necessary. Super Bowl XIV was one of those necessary times. In fact, the entire fourth quarter makes the list at number two.

Heading into the last quarter of the game, the Steelers were losing, 19-14, to the underdog Los Angeles Rams. If life truly mirrored fiction, then the Rams were destined to win as depicted in the film Heaven Can Wait released just 18 months earlier. Pittsburgh had other ideas. With just under 13 minutes left to go, Terry Bradshaw threw a 73-yard pass to John Stallworth, scoring the go ahead touchdown. With only a two point deficit, the Rams looked to gain the lead back, but made a crucial error. Ferragamo didn’t see Jack Lambert skulking around behind Preston Dennard when he threw the ball from the Pittsburgh 32. Lambert intercepted and shut down Los Angeles drive. 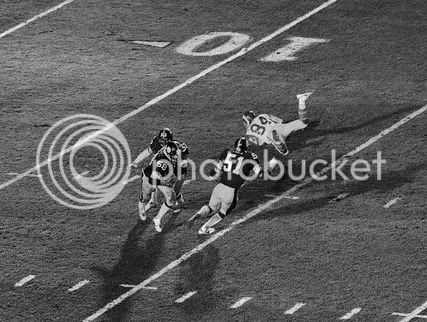 On their subsequent drive, Bradshaw found lightning again and hit Stallworth for a 45-yard reception that took them to the Rams 22. An interference penalty by Los Angeles in the end zone brought the Steelers another 21 yards to the goal line and on third down and one, Franco Harris punched for six giving Pittsburgh a 31-19 lead and Los Angeles heartburn. After a turnover on downs, Pittsburgh ran out the clock, winning Super Bowl XIV.