I Ought To Be In Pictures

This is a lesson in “Be careful what you wish for.” One of the greatest inventions of the 20th century is undoubtedly the digital camera. For one, the ability to see your picture immediately after you take it eliminates question of whether or not someone blinked. Secondly, the ability to store hundreds of pictures on the camera and then transfer them to an electronic storage device is better than the previous model I utilized which was a shoebox or drawer with hundreds of envelopes filled with random photos. It also makes us a little lazy. Knowing that those pictures are right where you can see them prolongs your ambition to go get them printed. “Well, maybe I’ll just buy a printer and photo paper.” Good Luck, printer ink will cost you a lot of money and so will the photo quality paper. With that in mind, I got my first digital camera for Christmas just before my daughter was born. The prospect of being able to capture hundreds of photos of her every waking moment filled me with a giddiness that could only be rivaled with the thought that I wouldn’t wonder which disposable camera has pictures of her on it and which one has Christmas from three years ago. I still have about five disposable cameras, sitting in a drawer, undeveloped. By now, the film is probably degraded beyond the point of even caring. My daughter arrived and I snapped pictures of everything. I took pictures of her sleeping, her crying, her feet, her nose, her flipping me off…yes, that is correct. After six months, I already had over 500 photos stored on my computer. Unfortunately, I had none in my wallet or in frames on the wall of my home. Suddenly, I felt like the worst parent in the world. People would ask me about my newborn and I had to describe her to them or at least show them a tiny, fuzzy image on my cell phone that was poorly lit. Soon, my wife began complaining that we needed to get actual pictures of her before she graduated college.

This past Christmas she started hinting around that she wanted a printer that could handle digital photos. I remembered the days of trying to get copies of my acting head shot printed out for auditions instead of paying $300 for them to be done by a professional outfit. It would have cost me just as much, if not more to buy the printer, ink cartridges, and paper. But now, they have these little kiosks in stores that will do the work for you. All you need to do is supply the storage device. CD’s, memory cards, and even USB flash drives are accepted in most places and you can manipulate the images right there in the store before buying them. I had a thought. If I could load a bunch of the pictures from my computer onto my 8GB flash drive, I could give my wife a better Christmas present, the actual pictures.

Of course, being the procrastinator I am, I could never find the opportunity to get to a store to do it. I went online and found that I could directly upload the photos from my computer and have them shipped to my house. Now, I realized that I could not get them there before Christmas Day, but the photo albums that my wife would open would be a preview of coming attractions. The quizzical look on her face prompted an explanation and I broke down, telling her that I didn’t buy her a printer, I bought her 228 actual pictures with duplicates. At $0.09 a picture, I couldn’t pass up the chance to have actual photos of my kid from her first six months of life. Eventually, I’ll get around to ordering more but for now, my wife will have her hands full.The Tuesday after Christmas saw the arrival of a pretty good sized box on my front porch. I rushed into the house and tore it open like it was my own Christmas gift and I was, again, seven years old. I began flipping through the pictures and began to wonder. There were no people in any of the shots and I’m not sure, but I didn’t remember going to Disney World in the last 16 months. Soon, I was staring at complete strangers. Who the hell are these people? Where’s my daughter sleeping, crying, and giving me the bird? Where are her feet? I became livid? I called the store and they were of no help. I even went online to the address of the actual service and opened up a live chat session that ended with, “We’ll get back to you.” I checked the box again and there was a packing slip with an email address on it. I figured what the heck, I should at least tell her that I got her photos. Maybe she got mine by accident. The response was positive. She’d ordered pictures at the end of November and had been trying, without luck, to find out what happened since the beginning of December. It just seemed odd that her order waiting almost a month to ship and then went to the wrong person while mine went to her. We both agreed to mail each other our orders with the understanding that our shipping costs would be reimbursed by the vendor. Soon, I had my baby on glossy 4x6’s.

Now, if you think that’s the end of the story, you’re wrong. Two days later, I received an email stating that I would be refunded. There was no mention of the shipping cost through UPS, they opted to refund the entire amount of my order. In essence, I got 456 photos for $8.00. Not too shabby. The next day, I found another box on my front porch. This one came from the photo service. It was another complete order of 456 pictures. I figured that maybe they felt bad and just sent another order and charged me the amount they credited giving me quadruples for the price of doubles. Still, I think I made out ahead of the game. Now, I could give pictures to my family as well as hers and still have pictures for ourselves.

Here it is a brand New Year and in the mailbox yesterday, I found another box. It looked strangely familiar. It was, again, from the photo service and inside was another 456 pictures. I now had 1368 pictures for the price of $8.00 in shipping. So, now when anyone asks if I have any pictures of my daughter I can give them their own personal copy. I can only imagine what the mailman will have for me today. 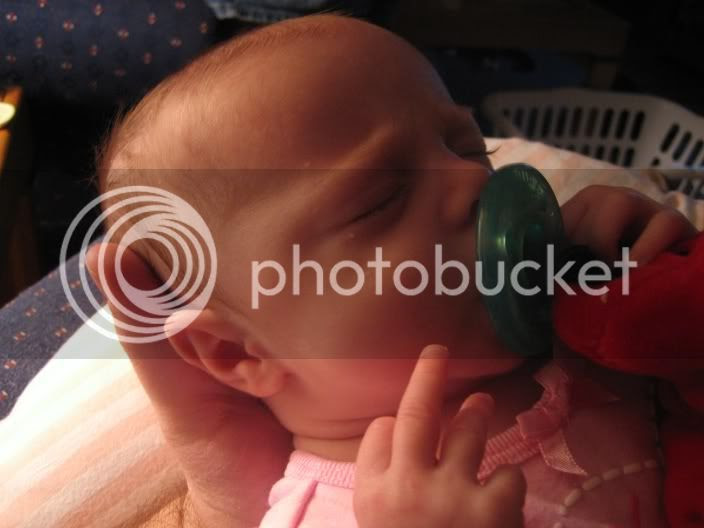 All that talk about digital pictures and you don't post the one of baby girl flipping you off? What's wrong with you?

Believe me, by the time she's a teenager, you'll be making the most of any opportunity to embarrass her by posting photos publicly.

Brilliant! Definitely save that one for the scrapbook for when the first boyfriend comes over.