I considered the title to this as Corporate Legal Department thinks they Got a Match? Our Face and Your Butt.

I’m posting this in the regular blog as well as the shop just because this whole premise is funny to me, but then again so are jokes about flatulence. Here’s the back story.  16 year old Jimmy Winkelmann from Missouri founded a parody company called The South Butt. The premise is a parody of overly priced, pretentious outfitter, The North Face. Personally, I find it hilarious since you are comparing anatomy and I love their tagline, “Never Stop Relaxing"  which spoofs The North Face's "Never Stop Exploring."   The logo design for North Face has three curved lines like a mountain while The South Butt has two curved lines in an opposite direction and opposite side of the logo. 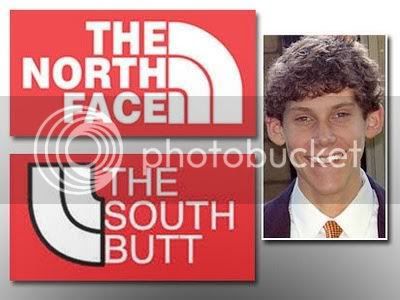 Logo for The North Face and South Butt
along with picture of Winkelmann
Here lies the problem. The North Face is suing this young upstart entrepreneur, who is now in college, over a pending trademark application. I guess they saw a possible confusion between their Face and his Butt mark.  Winkelmann countered the cease and desist demand by North Face by offering to sell out for a million dollars. North Face declined and then outright sued.
So, they went to court and the judge, between fist of laughter, told the two stop butting heads and work out their problems through mediation. Things didn’t go well and The North Face asked for an injunction if no settlement could be reached. That won’t be seen until April of 2010.
Here’s where I applaud the young man. He had an idea, he made it happen and now he’s being punished for it. He even shamed…or pwned The North Face by donating clothes to a Children’s Hospital and simply asked The North Face to match it. They expressed no interest. Now that’s business. That will go far in the court of public opinion.
The quibble over saving face…or butt is not for me to decide. Frankly, I think North Face is a bit of a snob and regardless of Gore-Tex or HyVent in their products, their prices are ridiculous and their brand is usually for people who go to ski resorts to wear the trendy clothing and not actually do any skiing. Aspen pretentiousness is all I’m saying.
As a shopkeeper with a penchant for parody, I throw my total support behind the little guy here considering the playing field for market share is clearly in TFN’s favor. I love the idea of totally going after an entity that is owned by a bigger conglomerate and tries to pass itself off as being rooted in its supposed product line and lifestyle. It’s Vanity Fair for crissakes!
This is simply The North Face beating its chest so that it doesn’t become the butt of someone else’s joke. Too late, I say. While I do admit that some of the tactics are a bit juvenile and won’t score him points in a favorable ruling. However, they are totally playing into the humor by saying things like “There could be brand confusion.” Of course, an 18 year old, now armed with the basics of copyright and trademark law can now humorously craft a response like “There appears to be little recognition, if any, that the savvy of consumers precludes anyone from confusing a face with a butt.”
At the heart of the matter, Jimmy wanted to pay for college and got some startup money from his parents to match his capital. Now, he’s producing a clothing line that is smacking the ass of corporate business just a little too much. My only suggestion to him is too maybe relax the parody a bit and become more of a niche business. Parody works for a reason and if you dip into that well too many times you run the risk of becoming a one joke comedian. If you want to thrive in a business that spoofs you need to develop your own model that nods to another. The more you poke the big lion in the cage with a stick, the more you risk pulling back a bloody stump. TFN probably has more legal defenses than Jimmy can afford and no amount of public support will trump that.
Still, I’d love to see him win this one, just on principle alone.
Posted by Mongo at 2/02/2010 12:00:00 PM