My love of the Baconator is epic if not sad, but that can’t be the pot of saturated fat end of the Lipitor rainbow.. Just for fun why not build my own burger just for the hell of it.

Now to lead into this I entreat you to recall John Candy eating the old 96er from The Great Outdoors. Then, go on ahead to Clearfield, PA and try out Ye Olde 96er at a place called Denny’s Beer Barrel Pub. These guys are a nutritionist’s worst nightmare. They have speed records to be broken by eating 2lb and 3lb burgers and all the way up to 15lbs. By the way, that 96er that I mentioned was just eaten in less than 2 and a half hours by a teenager in December. He also ate the 15lb burger in 4 and a half hours. Pass the Tums.


“Look at the size of the maggots on that meat.”

Anywho, back to the Mongo Burger. In the age of full disclosure of nutritional value, it might be of importance to flip over your carton of fries and look at the table on the back, or the bottom of that cardboard box your burger came in, provided you can see through the soaked in grease stains. The numbers are astounding. It’s insane how bad fast food is for us and don’t even get me started on McDonald’s salads. But just for fun go to Burger King’s site and do a little mad scientist work of your own.
It might be hard to navigate but simply put click on this link and build your own.

The consumerist has been having some fun with this site and why not? After all, it’s like catching a glimpse at your own salty, meaty death. You can choose any sandwich like the Triple Whopper and then take away or add on things like extra meat, chicken, fish, cheese, sauce, bacon, onions, bacon, lettuce, tomato, bacon, mayonnaise, bacon, and even bacon. Then check out the nutritional value of your creation and even try to order it. You could create the Land, Sea and Air sandwich. It’s rumored to be on the ”secret” list of menu items that only the true fast foodies know about. Or anyone with an Internet connection, anyways. The LSA sandwich is a beef, chicken, and fish patty on a bun, presumably with mayonnaise, ketchup and tartar sauce as well. It’s definitely not Lent friendly.

For my own, I created the Mongo Burger which has four whopper patties, four orders of bacon, three slices of cheese, extra, extra mayonnaise and tops out at 1830 calories, 135g of fat, 48g sat. fat, 350mg of cholesterol, 47g of carbs, and 2220mg of sodium. Dear god, just have the ambulance on its way. 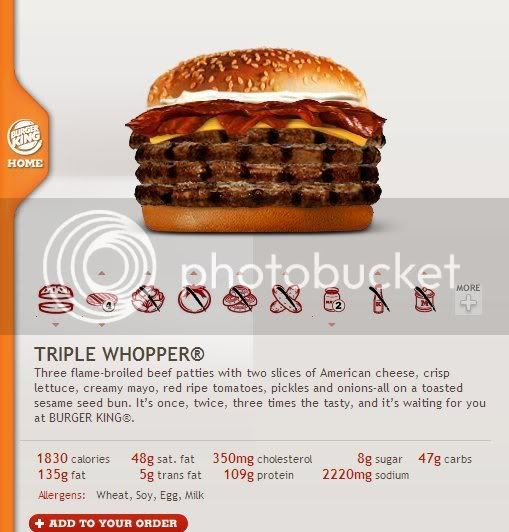 Supersize my Lipitor while you're at it. 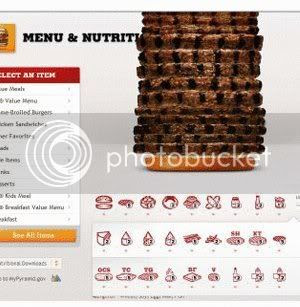 The Oh My Colon Burger From The Consumerist Article


Now whether or not BK would actually make the thing is debatable. This could be just a fun way to get people to buy a regular sized salt meaty death. Burger King certainly has better marketing skills than say McDonald’s. These are the people that brought you The King who still terrifies and titillates me in a way I will never shake from my psyche. Not to mention there was the subservient chicken which I believe is the answer to which came first between it and chat roulette. The ability to custom order your demise is more likely a gimmick for fun than it is to actually order said death. However. there is an “Add To Your Order” button, but I’m sure someone with an ounce of common sense would say, “No way, chunky butt.” If they do, BK’s slogan of “Have It Your Way” may apply to your funeral arrangements as well with buried, cremated, or flame broiled.

“Well sure it is, there is nothing on that plate but gristle and fat!”