How to pack a life in a car

It seems rather premature to discuss vacations and road trips when outside my window I still see salt covered cars and ice dunes in the parking lot. However, let us turn our thoughts towards warmer weather and packing the car for trips. You don't have any choice, so just sit down and stop bugging your sister or I'll turn this blog around so, help me, I swear.

As I look at what it takes to go anywhere with my eight month old, I'm reminded that this is payback for my parents. They, of course, packed all of us kids into a truck or a station wagon for long trips to the beach and to college. I considered my Father a master packer, being able to utilize every available space in the vehicle for storage of our stuff. I took that same approach when purchasing a replacement vehicle for limping 97' Chevy Cavalier three years ago. While my younger, less experienced packer of a wife, wanted a car with a good sound system. She even went as far as to suggest the ability to install extra speakers. That way, we could blast our greatest hits of Snoop Dogg and Maroon 5. After patting her on her head and chuckling at her naivety, I reminded her that, even though this would eventually become her car after we have a child, she would need the extra space for a car seat and everything the child owns.

Back to my Father. The man drove a Chevy Custom Deluxe Truck with a cap on the back. This truck had seen it all. When we went camping, it was able to tow a camper that contained all of our stuff, yet the cab of the truck could not contain all of their kids. My Dad became the inventor of the wonderful thing, which I thought was me, until the age of ten. The wonderful thing is simply a metaphor for something that previously existed in nature as some other sort of object or objects which have been disassembled and rebuilt into another functional object for which it was not originally designed for. One example of the wonderful thing was a charcoal grill built entirely out of a 55 gallon drum, lawnmower wheels, my childhood swing set, and counter top remnants. This fully functioning grill gave my Dad backyard supremacy in the realm of burger and hot dog grilling, allowing him to simultaneously cook for an entire graduation party without having to reload the grill. Another example of a wonderful thing was a homemade forge constructed out of a kettle grill and a shop vac that he used to build other wonderful things.

The most wonderful thing my Father built was an insert for that Custom Deluxe. The components for the insert have been regarded as a trade secret but I can tell you that part of it was fashioned from an old table top. The insert mirrored the functionality of the eating table in the camper. By day, the table and its bench seats served as a place to eat breakfast and play Pit and UNO. By night, it transformed and became a bed for my sister. Just like the camper, the insert slash wonderful thing was more than meets the eye. It also consisted of two bench seats that could be opened up for storage and a table post affixed to a base that slid into the bed of the truck. On long trips it served as a place to store three adolescent kids, playing Trouble. You could only play Trouble in the back of the truck, because all the pieces fit securely into holes on the board and the die was encased in the "Pop-O-Matic" container. We tried playing Trivial Pursuit once but some dumbass cut my Dad off on I-95 and cards flew everywhere. We no longer can finish the game as the pink game piece, nor will we ever find out how many cherubs are located on the game board. (In case you wondered, there's actually 19. Two on either side of every "wedge" square, six around the hub in the middle, and one in a pink category square somewhere on the board. But, I digress. ) By night, the post could be removed and the table top positioned in between the bench seats. All four cushions came together to form the mattress. This is where my brother slept. Where did I sleep? There was a bunk right above the couch in the camper that I wedged myself into for about 4 years until I kept banging my head on the ceiling getting in and out.

The 1980 Chevy Custom Deluxe
Alas, the insert was laid to rest along with the truck when my father had replaced the Custom Deluxe with a Dodge Ram in the early 90's. The Dodge also got some packing use out of it when I started college. For some unknown reason, I felt the need to move all my Earthly possessions with me to South Carolina where I was enrolled at Coastal Carolina University. Hey, you never know when you might need something and being 12 hours away didn't help. My father managed to pack everything I owned including another wonderful thing in the form of a headboard with shelves. This technically wasn't a wonderful thing, but considering that it used to be a tree, let's not split hairs. The cushions from the old insert survived the transition from Chevy to Dodge and I rode the entire 12 hours on them in the back of the truck in a space that reminded me of the bunk from the camper. Funny thing about traveling south in the back of a truck. If you leave home wearing shorts, you arrive wearing shorts. I transferred to the University of Pittsburgh in January of 1994, and found myself wearing shorts when we left Mytle Beach, and then having to put on more layers somewhere around Virginia after dark.

A 1984 Pontiac Firebird similar to mine
College moves and desertion of an apartment in under three hours aside, my father was able to pack a car or a truck to the hilt, never necessitating the need for more than one trip. This is something I have studied and tried to hone as a marketable skill. My first car, a 1984 Pontiac Firebird didn't really allow for a lot of trunk space, but the "Plugger" in me decided that I would not be deterred by such obstacles. In 1994, I packed enough stuff for myself and my girlfriend to take a vacation to Ocean City, Maryland. For anyone who has ever owned a 80's model Firebird knows it has a shallow trunk with a big hump between it and the back seat. Without sacrificing visibility out of the rear window, I managed to pack for a week long trip. My second car was, of course, my Chevy Cavalier. I loved this car for two reasons. Aside from some starter problems, it never let me down in getting from Point A to Point B. I drove that car everywhere. Staring from my home in Southwestern Pennsylvania, it went to Ohio, New York, West Virginia, Maryland, North Carolina, South Carolina, and Canada. Secondly, it had a fold down bench seat in the back which allowed for great packing possibilities. Again, I managed to pack enough stuff for a week's vacation without sacrificing needed visibility. When I bought my first Christmas tree (It was artificial as I am allergic) the box, containing the seven foot spruce, slid smoothly into the trunk and onto the folded down back seat. When I bought my first 32 inch television, it fit in between the back seat and trunk laying face down on a blanket to guard the screen. Unfortunately, I had to remove the set from the packing box as it did not fit in the car whole. Still, I managed to do it. 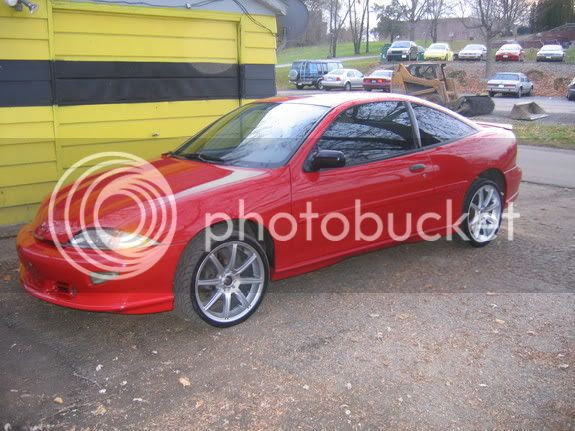 1997 Chevy Cavalier
In 2005, after nearly 150 thousand miles and a blown head gasket, I sadly said goodbye to my Cavalier in favor of my new car, a Malibu Maxx. This five door sweetie allows me hatch functionality with 60/40 split fold down bench seats in the back and a fold down passenger seat for hauling long items. I've yet to max out the storage space even with the little one.

2005 Chevy Malibu Maxx
While, I revel in my accomplishment of being a master packer, I take no credit as I was taught by the best. However, I'm sure I'll be faced with challenges in packing strategy in the future as I will have to now pack for three people to go to the beach, losing a portion of my coveted backseat to a car seat. Not to mention having to eventually pack the entire life of my kids when they go to college. By then, I will have moved on to another vehicle, but will always keep an eye on how much storage space comes with my purchase. Perhaps I will echo my Father's creative side and construct some sort of enhancement for maximization of minimal space. After all, I want to make sure I have lots of space to move my wonderful things from point A to point B.
Posted by Mongo at 3/14/2008 07:46:00 AM

Awesome, my father had a 1976 Dodge conversion van with that table with bench seats that morphed into a bed in the back we also had a fridge and cabinets and lots of storage under the bench seats. My father too was a master packer and I learned from him. When my husband and I went on our honeymoon to FL I let him pack our Kia rio cinco but he told me there was no more room at one point and I ended up repacking the entire car with room to spare. It's an art and if you weren't trained, you may never learn. Great Blog!! BTW, I only started reading this because I am about to buy a 2005 malibu maxx and was trying to find unbiased opinions. Thanks! my decision is made!

Thanks for the comment. Flattery is something I take very seriously. Kidding, but I appreciate it.

BTW, I will make a suggestion or two about the Maxx that I've experienced. I love the space and I love the car, but I will say that it has been very bad on brakes and rotors. I only have just over 50,000 miles on it and I've had the original rotors machined twice, replaced, and I've had to get brakes every year.

Also, I have power seats and the mounts wore out after three years. It might be because I'm a bigger guy and tend to flop down on the seat, but I have to keep it on the lowest setting or it rocks.

How did you feel about the Rio Cinco? I need a new car to replace my Sunfire POS.