2013 D-Bag Awards Round One: Congress vs. Healthcare Companies 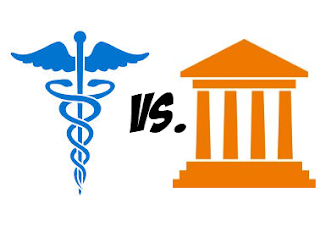 I’ve been dreading this match up simply because of the nature of the topic.   This country has been so divided by this debate that it has become a huge rift in a lot of lives.

Here’s what we have.

The Affordable Care Act has been put into law.  It was signed after being approved by whatever votes were needed in both parts of congress.  It was tried and upheld by the Supreme Court of the United States of America.  It has had numerous issues in taking effect.  Yet, it is no different than anything else we’ve talked about.   EA, which is in the business of being ready to launch video games did not have enough servers ready to handled the demand of Sim City’s launch.   Sony, who has had three iterations of their console, the Playstation, come out over the last 20 years still had broken units shipped and numerous flaws.   So, the fact that a website for healthcare.gov did not work as perfectly as intended on day one of the availability for signing up should be of no surprise.  The bigger problem is if it doesn’t work when the last day of signing up comes and goes.  And to that we have seen numerous successes of the law taking place.  But, we love to hate more than we love to change.   We also love to bash more than we love to fix.   We would rather complain about it.

But here’s what people don’t realize:
Yes, the promises that we could keep our insurance if we wanted it were a little bit much.  Then again, the government shouldn’t promise something that the healthcare companies would ultimately destroy because they are the ones losing money on this deal.  So, it stands to reason they will do everything in their power to retain their profits vs. actually helping people.  Oh, you can’t keep your doctor?  Why?  Because Obama said you can’t?   The healthcare companies have been passive aggressive in their placing of blame.  Of course, they are the victim in all of this.  Why, the biggest healthcare company in the state of PA is claiming it should be tax exempt because it has no employees?  The same company that said its employees could not smoke during at all during their work day, even on their lunches or breaks.  So, either they have employees or they just have people milling about.  Which is it?

You cannot possibly please all of the people all of the time.  It’s the production triangle.  You have tree sides, Quality, Time, and Cost.  You are only allowed to pick two.   If these things could have please every single person, then someone would have found something to bitch about, just because they don’t like it.  And that leads me into the next candidate, Congress.

This year, more than any other we have seen a divided country, not just in constituency, but in leadership.  We went into the year with the looming debt ceiling and sequester.   Instead of fixing problems, they blamed each other.  As the deadline for the ACA and the budgetary crisis loomed, both sides became so pissy with each other that it looked more like a bad case of we don’t like who we picked for kickball than anything else.  Eventually, we had a government shutdown that lasted about two weeks.  In all, the country hemorrhaged more than it saved and cause more discourse among a society, already easily influenced by fear mongering at the hands of those supposed to help us.  The wire tapping scandals continued under their blessing and still there was issues.   Republican vs. Democrat  and Libertarian vs. everybody.  What really makes me nuts is that if Libertarians were so sure their way was best, they’d understand why it isn’t.  You cannot expect a country to simply stop hating one another because you think it’s the best choice.  Yeah, we understand that it’s not, but you cannot cork the bottle of stupidity with more stupidity.   You’re going to have to look at the entire field and figure out how to make what we already have work before you can change it into something better.   You cannot ask for a different hand in this card game no matter how much you think you can win with your own ideas.   If everyone adopted a more broad solution culled from the best parts of everybody’s ideology we could probably get something done.

So, to that the winner of this match is: Congress.
I would give you all the reasons why, but I have to go on recess for a million months instead of actually doing my job.