2013 D-Bag Awards Round One: The Internet Vs. Humanity

The Internet Vs. Us

It has gone online.  It has become aware.  We are screwed.   Why?

In 2013, the Internet gave us such wonderful things like “What The Fox Says” and Doge and a host of others, but with great fame comes great fail.  The Internet has proven, like so many other things that technology only serves to make us dumber.   And in that space between our ears we have heard a pin drop and the ocean roar.     We now have given fame to a group of people who were made famous by their picture being captioned by other people.  So much so, that they get to attend conventions and other events.   Twitter has made it easier for people to say stupid things and then try to erase them but you can’t erase cyberspace.  (We’re looking at all you idiots that don’t know who so and so hosting an awards show is and think that Kurt Cobain was a failure because he didn’t amass as huge of a following online as Justin Bieber).

Then, there’s the whole, “X wants Y removed from the Internet.  Share it with everyone.”  Pictures of unflattering poses by superstars and Presidential skeet shooters got passed around everywhere.   Facebook became a ridiculous mess of Paul is Dead posts (Walker) and then when Nelson Madela died, no one cared.   "Let's see if this potato can get more likes than X".  We hashtagged everything that wasn’t anchored down.  Phil Robertson spoke out in a GQ piece about Gays and African Americans and got suspended from his television show job and all the Internet could say was that his freedom of speech was being violated.  (It wasn’t just so you know.  You people really are idiots… Yes, you too, Sarah Palin.  Someone who was the governor of a state and possibly a heartbeat away from the Presidency should know what the Bill of Rights covers.)  And with all that going on, we just know that the mainstream media is going to cover it, RIGHT?!?!?

Truly the Internet is a giant douche bag, allowing all of this failure to occur.   But wait…  It wasn’t the Internet, was it?

We did all of those things USING the Internet.  We gave all the twerkers and Harlem shakers fame via views.  We retweeted and favorited all of the hate speech and fail to a hilt.  We defended Phil and cherished an actor who died in an accident that had some irony as to his claim to fame.

We did all that.

We let Justin and Miley and all of them be even more famous because of social media.   We were unfriended by countless numbers of people on Facebook because they didn’t share our same outlook, flawed or right as it may be, and we got into flame wars on Twitter over stupid things.  We sat back, and watched the world burn and loved every minute of it.

I think we know the real winner of this, it’s us.  We are the bigger douche bag.   Look, as much as I hate what the Internet has become, it is an inanimate object.  For every picture of a drone or GMO plant or Illuminati conspiracy, there are people out there like John and Hank Green,  Hannah Hart and Talia Castellano.  We are making the hate and fail the bigger stories.  That’s why we are the bigger douche bags.   There are people out there using the Internet to try and make the world a better place but we can’t have nice things.  We ruin it like everything else in this world. 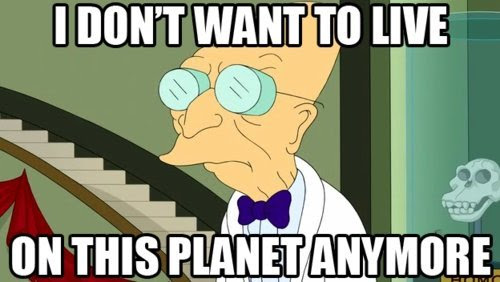