2013 D-Bag Awards Round One: Miley Cyrus vs. Justin Bieber


Two girls both alike in douchebaggery. 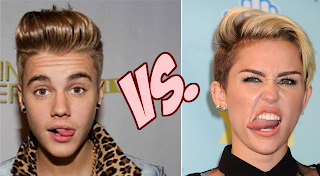 Biebs started had his share of incidents.  There was the Anne Frank House incident where he signed the guest book, “Would have been a belieber” in the guestbook of the Holocaust victim.  I guess because she died in a concentration camp we’ll never know.  Then there was the pissing in a bucket incident where Biebs decided to drain the Little Bieber in a mop bucket in a restaurant.  And who can forget him getting pics snapped in the bed of an “escort”.  Funny, she must have thought that being a belieber wasn’t enough and would only accept cash.

Miley had an interesting year, well, her tongue did.  After all, we saw plenty of it as well as some weird ass shit at music awards.  There was the weird bear thing and foam finger performance with Robin Thicke.  There was the fact that she licked a sledgehammer.  Lastly, she twerked Santa at the Jingle Ball.  And pretty much the fact that she was up for TIME’s Person of the Year makes you want to just say, “Enough already Hannah!”

But who is the bigger douchebag?
He came in like an undropped ball!
While Miley’s antics were merely for performance reasons and she pretty much became the biggest talked about music star this side of a blurred line, Bieber went above and beyond and pretty much disrespected a lot of people, including his fans.  He’s  little punk that thinks he’s the hottest thing since sliced white bread which he fails to realize he is when he acts all gangsta.   So, for that Biebs is our winner in this heat.